Comrade Bala: The Cult of Perversion

Cult leader ‘Comrade Bala’ raped two of his followers and kept his daughter a prisoner until she was 30, claiming he was a God with the power to create earthquakes and floods.

Aravindan Balakrishnan, 75,tried to ‘break’ his adoring female disciples in ‘The Collective’ by forcing them to perform humiliating sex acts on him.

A Malaysian nurse was told to ‘drink the elixir of life’ when she performed oral sex upon him.

India-born Balakrishnan and his followers lived in almost complete isolation in different addresses around south London for over 30 years.

His daughter Katherine Davies, who was born to one of the cult members, had been so restricted she found it difficult to walk and could not cross the road by herself by the time she escaped aged 30.

Balakrishnan was convicted of six counts of indecent assault, four counts of rape and two counts of assault occasioning actual bodily harm after a three-week trial. 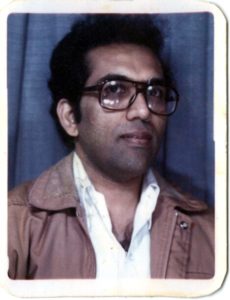 He was also convicted of false imprisonment and ill-treatment of a child under the age of 16 in relation to his daughter whom he named Prem Malpinduzi, which means ‘love revolution’.

He was cleared of a charge of indecent assault and a charge of causing actual bodily harm.

Jailing the cult leader for 23 years, Judge Deborah Taylor said: ‘In the 1960s you were a follower of Mao Zedong and advocated revolutionary socialism – by all accounts you were charismatic.’

‘Your two adult females were abused by you psychologically, physically and sexually – it’s a measure of the psychological control you had over them that they went out to work every day but returned in the evenings to your abuse.’

Balakrishnan did not react as his sentence was read out, but one of his most devoted followers, former cult member Josie Herivale shouted from the public gallery: ‘This is political persecution.’

Born in India, Balakrishnan spent his youth in Singapore before moving to the UK in the 1960s to study at the London School of Economics.

He became a follower of Chinese dictator Mao Tse-tung and organised pro-communist rallies, building up a student following by giving lectures on the tyrant’s teachings.

Balakrishnan organised a communist group in the 1970s called the ‘Workers’ institute’ which met at Acre Lane in Brixton, south London.

As his lessons became more extreme, the moderate members of the cult were driven away, leaving him with a close-knit group of female members.

Balakrishnan set up a commune which moved between various addresses in south London, giving lectures that became ever more bizarre. 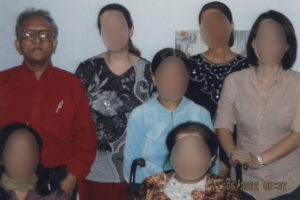 Devoted…Comrade Bala and his disciples

The women were only allowed out in pairs and were forced to stand to listening Balakrishnan speaking for hours at a time.

They were encouraged to ‘inform’ on one another, and Balakrishnan would daily choose a member to humiliate and denounce in front of the group, often physically assaulting them.

His followers were forced to sever their ties with their families and ordered to worship ‘Comrade Bala’, believing he had the power of life and death over them all.

Only his two adult victims were allowed out to work – one in a trade union and one as a nurse.

Between 1979 and 2013 the cult lived in 15 different addresses around south London.

The first victim, now 64, joined what Bala dubbed ‘The Collective’ in the late 1970s after being introduced by her brother.

Balakrishnan first sexually assaulted her when his wife Chandra Pattni, 67, fell into a diabetic coma in 1979.

He called her into his room and kissed her and rubbed his unshaven chin hard into her face, leaving her with a red mark as if he was ‘imprinting’ her.

She was then forced to perform oral sex and was frequently raped, as well as being made to perform other humiliating sex acts.

To further exert his psychological control over her, she was forced to write a ‘sexual autobiography’ that Balakrishnan would use to humiliate her in front of the group and also had to write ‘sex scripts’ according to his perverted fantasies. 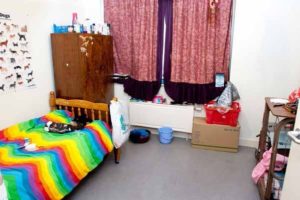 The bedroom that would become a cell for his daughter

The victim – who worked at a trade union – would regularly go to work covered in bruises from Balakrishnan’s assaults.

She first tried to escape in 1987, but felt so disorientated she rang the cult and returned.

The second time she tried to escape she used the words ‘I voluntarily and consciously want to leave’, but was held down by the other members of the cult and beaten so violently she was unable to go to work for three weeks.

She final managed to escape in 1989, but did not tell anyone about what she had been through until she spoke to the police in 2013.

Balakrishnan was having sex with four of the women in the cult and they were made to queue up outside his room.

The second victim, a Malaysian nurse, was not interested in politics, but had started attending lectures to meet people when she arrived in London.

The first sexual assault on her by Balakrishnan was her first sexual contact with a man, when he slipped into her bedroom at night and removed her clothes.

From then on he would regularly force her to perform oral sex on him – telling her to ‘drink the elixir of life’.

The first time it happened she tried to resist but he punched her hard in the stomach, terrorising her into submission.

Once he struck her so hard it made her ear bleed, and she now has partial hearing loss in both ears due to the attacks by Balakrishnan.

The nurse eventually escaped the collective in 1992 with the help of her colleagues but also did not tell of the abuse she had suffered until she spoke to police in 2013.

Balakrishnan’s daughter was born to another member of the collective, Sian Davies, in 1983.

Katherine Davies who can now be identified, changed her name from Prem Malpinduzi when she was free of the cult.

When her pregnancy started to show, Balakrishnan accused her of allowing the bourgeoisie to attack her, saying that her belly was full of gas. 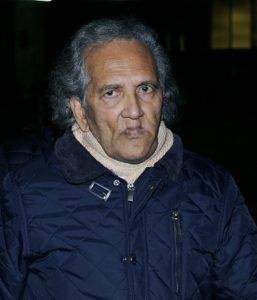 Not so charismatic now…Bala arrives at court

It was not until her waters broke that she realised she was pregnant, and the birth was one of the few times a member of the collective was allowed to seek medical attention.

The child was brought up entirely isolated from the outside world and never went to nursery or school, or even to see a dentist or a doctor, and was not even told who her parents were.

Sian Davies died a quadriplegic in 1997 eight months after falling out of a top floor bathroom window after suffering a rapid decline in her mental health.

The night of her fall she was talking to herself and tried to cut herself with a knife. Her daughter remembered seeing her bound and gagged on the living room before she went to bed.

After the fall, her family were told she had gone to India to do charity work, and did not learn she had been paralysed and was lying in a hospital bed until her inquest.

Her daughter did not find out who her mother was until long after her death.

A second woman, Oh Kareng, also died in mysterious circumstances after hitting her head on a cupboard in 2001.

The police were not informed of the accident, and she did not receive any medical treatment. 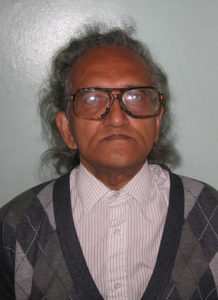 Mugshot..Bala will die behind bars after he got 23 years

Her family were not told about her cremation, and they were told the collective did not have their ashes when in fact they were in a lockup garage in West Norwood.

Files on both women have both been sent back to the coroner, and both cases could be re-opened following a review.

Balakrishnan of  Latymer Road, Edmonton,denied seven counts of indecent assault and four counts of rape against the first two victims, claiming they were willing participants in the sexual activity and had seduced him.

He further denied three counts of assault occasioning actual bodily harm against them, insisting he had never beaten them, and insisted they were free to leave the cult at any time.