A retired TV producer who tried to hire three hitmen to kill his partner so he could spend her inheritance on his young lover has been jailed for 17 years.

David Harris, 68, who worked on ‘The Bill’ for 18 years, dreamed of spending his twilight years on a Caribbean beach with 6ft 1in Lithuanian Ugne Cekaviciute, 28, after meeting the former professional basketball player in a brothel.

But the 5ft 8in pensioner was broke and needed 69-year-old parish councillor Hazel Allinson dead so he could sell her £800,000 house in the pretty village of Amberley, near Arundel in West Sussex.

Twice married Harris was besotted with Ugne and had taken naked photographs of his girlfriend posing with the family spaniels in the home Ms Allinson treasured. 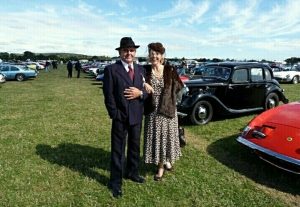 Harris, who has a daughter from a previous relationship, maintains that he offered sums of up to £250,000 to at least six potential hitmen as research for a thriller novel called ‘Too Close to Kill’.

Old Bailey jurors heard he had not written a word of the book and unanimously convicted him of three counts of soliciting to murder following a two-and-a-half week trial.

Today (FRI) Harris was given a hearing loop with a large pair of black headphones after he complained that he could not hear proceedings from the dock when his sentencing hearing started.

He took the headphones off and showed no emotion as Judge Anne Molyneux jailed him for 17 years.

‘Your evidence was that you intended to write a book,’ she said.

‘You have never written a book, and there is no evidence whatsoever that you intended to do so.

‘Your continuing obsession with Ms Cekaviciute and the stress of the continuing lies you had told were too much. 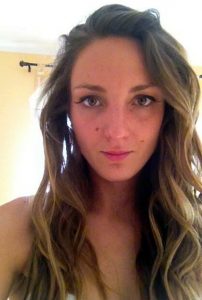 ‘You knew that you were the sole beneficiary of Ms Allinson’s will.’

The court heard Harris had asked potential hitmen to make Ms Allinson’s murder look like car-jacking or mugging gone wrong – he had said: ‘I would like some kind of accident, as serious as it can get.’

Judge Molyneux said: ‘Her death was to fund your life, you had used her until she had outlasted her usefulness to you.

‘All you wanted from her was that she should die and leave her inheritance to you.’

She added: ‘The manner of Ms Allinson’s death would have caused her terror and pain.’

Prosecutor Philip McGhee revealed that Harris ‘continues to deny that he ever had any intention to solicit the murder of Hazel Allinson and maintains the claim he made at trial that he was writing a novel about a man in a similar situation’.

Harris underwent a personality test which concluded he has ‘social anxiety and characteristics of narcissistic personality disorder’.

He scored maximum marks for character traits including ‘manipulation for personal gain and lack of remorse or guilt’.

‘Mr Harris presented as having had complex and very dysfunctional relationships with women, including the victim in these events and his girlfriend Ugne,’ said Mr McGhee.

‘It’s said that he doesn’t appear able to form and sustain appropriate relationships with women, and this may be worth exploring as his motive to offend.’

Harris was found naked in bed with his girlfriend when he was arrested on 12 November last year and charged with plotting to kill his partner of nearly 30 years.

The ‘calculating and manipulative’ pensioner was rumbled after offering an undercover police officer £200,000 to murder Ms Allinson a day earlier, saying: ‘Whatever happens, it’s got to be fatal.’

He had earlier met three potential hitmen – ‘Hackney Hitman’, ‘Bethnal Green Hitman’ and ‘Soldier’ – and told them he wanted to make Ms Allinson’s death look like a freak accident, car-jacking or mugging as she walked to church for choir practice or left her country club, where she went to the gym or did Pilates classes.

Harris maintained his innocence, claiming he had been researching a murder mystery novel as he trawled sleazy bars, greasy spoon cafes and rundown garages in a bid to hire a killer.

He told jurors he hoped his planned book would become a best seller, be turned into a Hollywood movie and to sort out his finances.

‘It was based on a guy based on me, my sort of age, meets a young girl, falls in love, becomes besotted and over development decides he wants to be with her and decides what he has to do about his wife Holly,’ he said.

Ms Allinson, who came to court every day of the two-and-a-half week trial, did not attend the sentencing hearing after she was advised by police not to come to court.

She refused to give evidence for the prosecution and did not want her police interviews used against Harris. 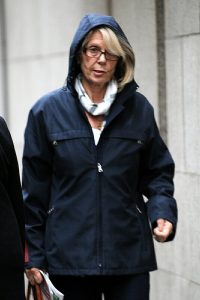 Hazel Allinson…refused to give evidence against her former lover

While watching Harris give evidence she even contacted defence lawyers about taking to the witness stand in his defence, but changed her mind after she was asked to leave the public gallery.

Harris, of East Street, Amberley, West Sussex, was given three concurrent 17-year sentences for three counts of soliciting to murder.

Anthony Rimmer, defending, said Harris’s commitment to the Christianity shows he is not a complete narcissist and is capable of ‘devotion to others’.

The chaplain at HMP Belmarsh wrote a letter to the court saying Harris was a ‘credible listener who helps other vulnerable inmates’.

‘He has talked about being a silly old man,’ said Mr Rimmer.

‘At the time he was very much driven by an infatuation.’

The barrister said it remained an ‘open question’ as to whether Harris and Ms Allinson would ever have contact again.

He argued that Ms Allinson was not a victim who would be vulnerable when Harris is released from prison.

‘She is a person of particularly robust characteristics and can stand up for herself,’ he added.

‘Any period of incarceration will be more difficult for him than it would be for a younger man.’

Judge Molyneux told the court that Harris, who has two failed marriages due to alcoholism, had his last drink on December 3 1989 ‘largely thanks to Ms Allinson’s support’.

The pair had met in 1989 when they both worked on The Bill and quickly fell in love.

When Harris moved in with Ms Allinson four months after they met, she provided him with financial support because he was living on a £130 a week state pension and a £1,300 annuity.

But Harris was ungrateful and became frustrated when Ms Allinson tried to save money after The Bill was not recommissioned in 2010.

He began to visit sex workers when the couple ‘ceased to be sexually compatible’ in 2011.

Judge Molyneux said: ‘In your words, you were ‘a stupid old man, not wanting to get old’.

‘Towards the end of 2011 you met Ms Cekaviciute in a brothel in Worthing. The relationship developed quickly.’

Harris became ‘besotted’ with Ugne and showered her with gifts, stayed with her in hotels, and helped her to go to college with Ms Allinson’s money.

He concocted the plan to kill Ms Allinson after maxing out his credit cards and exhausting his funds in a bid to sustain his relationship with his young lover. 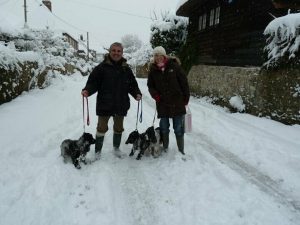 Out with the dogs…the couple had an idyllic lifestyle

One of the potential hitmen Harris approached, 6ft 4inch ‘man mountain’ Duke Dean, went to detectives at the City of London police when Harris asked if he had access to chloroform or poison.

Mr Dean introduced Harris to an undercover detective who filmed him asking them to arrange a mugging that would go ‘fatally wrong’.

He told the men: ‘I want to live the next five years with a girlfriend by the sea.

‘I just want to be with her. Any kind of peace and happiness I can have for the rest of my life.

‘I am 100 per cent sure whatever happens has got to be fatal.’

He added: ‘I know I will be sad. But I have never been more deadly serious about anything.’

Judge Molyneux said: ‘For your pipe dream, for your obsessive infatuation with a young woman, Ms Allinson who had protected and nurtured you was to die a painful and terrifying death in an isolated spot.

The judge said Harris is a ‘practised liar’ who has ‘manipulated others to achieve your own aims, without any thought for their feelings’.

Harris, of East Street, Amberley, West Sussex, was given three concurrent 17-year sentences for three counts of soliciting to murder.