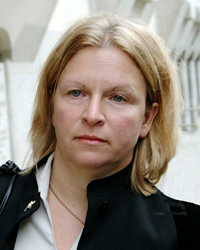 Dena Thompson had a Barbara Windsor style giggle and a flirtatious grin which some men find irresistible in a petite blonde.

But she was not thinking of love and romance as she was wooed by a seemingly endless procession of admirers.

Each victim snared in the Black Widow’s web of deceit was sadistically milked for money by a woman described by a judge as ‘one of the most fluent liars I have come across.’

Her first husband Lee Wyatt ended up living as a tramp, sleeping on bowling greens and park benches, convinced by Thompson he was soon to reap a fortune from the Walt Disney corporation and live a life of luxury in Florida.

Her third husband, Robert Thompson, claimed she tried to kill him with a baseball bat and carving knife after she trussed up the BT manager on their kitchen floor with masking tape for a bondage sex session.

Julian Webb, the second husband she married bigamously while she was still wed to Mr Wyatt, was murdered by Thompson with a curry spiced with aspirin and anti-depressants so she could cash in his life assurance policy.

Thompson was born Dena Holmes in Hendon, north London, to father Michael, a former prison officer and his wife Margaret.

Her early life appeared routine as she began a career with a building society and met Lee Wyatt in 1982 when she was 22. 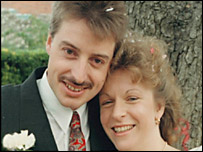 They moved into a house in Green Oaks, Lancing, the following year, married on October 12, 1984 and had their son Darren in 1987.

The couple set up a company called Denalee Crafts, which made and distributed soft toys while she           worked for the Woolwich building society in Arundel.

They had hoped to make their fortunes by developing a soft toy character for cartoon films.

But the firm went bust and Mr Wyatt’s father-in-law got him a job in the Bedford Hotel in Brighton.

Realising her dreams of wealth had been dashed, Thompson began helping herself to the first installments of £26,000 from the building society.

She also began an affair with Mr Webb, who she met when he was selling advertising for the West Sussex Gazette.

It was her first taste of the fraud and infidelity which would dominate the rest of her life.

Thompson signed up for a mortgage on a house in Douglas Close, Yapton, with Mr Wyatt in 1991 then served divorce papers on her stunned husband three months later.

She explained they had to seperate because the Mafia wanted a cut of a fortune they were about to make with their Denalee character ‘Sean the Leprechaun.’

Thompson breathlessly told Mr Wyatt was told his life was in danger and he had to vanish while a multi-million dollar deal with Walt Disney was finalised.

FRAUD AT THE BANK

He agreed and she even got him to write a series of letters framing himself for the building society fraud as she demanded ever increasing sums of money.

Mr Wyatt said: ‘She lives a life of lies and fantasy and I was the mug who went along with it.’

For three years he accepted his wife’s story as she set up home with Mr Webb in Arundel.

He found work at amusement arcades but sent most of the money to his cheating wife while he lived as a vagrant, always believing his dream life was just a phone call from Thompson away. 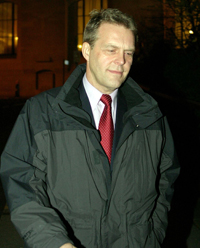 Lee Wyatt: Slept on bowling greens after being conned by his wife

Each time he contacted his wife she told him he had to stay on the run because he was being chased by a gang of assassins she invented called ‘The G-Men.’

Mr Webb was also hoping to start a new life in Florida with Thompson when she cut his life short with a massive overdose of aspirin and the anti-depressant dothiepin in 1994.

Detectives believe he may have begun to discover the extent of his wife’s lies before she killed him.

Police investigated the death but Thompson implied her husband may have killed himself and detectives could find no evidence against her.

After an open verdict was recorded at the inquest in August 25, 1994, neighbours noticed Thompson had a succession of new gentleman callers.

They too had all been promised a new life in Florida.

Mr Wyatt had began to realise his wife was lying and his worst fears were confirmed when he insisted on meeting Thompson in Florida in 1995 and caught her with another dupe, Robert Waite.

‘I’VE GOT A FATAL GROWTH ON MY KIDNEYS’

Mr Waite had agreed to fly to the US with Thompson after she told him she had a growth on her kidneys and had just weeks to live.

After years of stalling and faking illness, Thompson was jailed for the Woolwich fraud later that year after shamelessly trying to blame Mr Wyatt in court.

As soon as she was released she set about pursuing new male conquests.

She met BT manager Robert Thompson through a lonely hearts advert in 1998 and married him the following year.

Thompson told him she was a college teacher and antiques dealer and the couple married on a Florida beach after setting up home at Willow Cottage in Rustington, West Sussex, near Littlehampton.

His lover told him she had breast and ovarian cancer and he took a £36,000 early retirement package so he could run a charter boat with her in the Florida Keys.

Thompson told him she could get him a job – but her contact for the employment was temporarily indisposed as he was working undercover for the FBI.

She also said she had won £300,000 on the National Lottery but could not get to the money because it was in a bank in Jersey.

He gave her £3,000, as deposit on a home in Florida but she used it to pay off a credit card she had set up under his his name.

‘CAN I CASH MY HUSBAND’S LIFE ASSURANCE?’

She also made inquires about surrendering his £89,000 life assurance police and even put his house up for sale without telling him.

Thompson claimed her husband attacked her during the bondage sex session after she found out the truth about the money.

She said she hit him with a baseball bat in self-defence and was cut on the shoulder when she tried to grab the knife from him.

Mr Thompson told Lewes Crown Court: ‘I fell for her personality. I trusted her 100 per cent.’

In August 2000 Thompson was cleared of attempted murder of Mr Thompson but admitted 15 charges of deception and was jailed for three years and nine months.

It was then police decided to re-open the investigation into the death of Mr Webb.

Keep-fit fanatic Mr Webb then 31, loved hot curries and Thompson made him his favourite dish on his birthday – laced with aspirin and the anti-depressants.

Thompson told Mr Webb’s mother he was too ill to open his birthday cards on June 30, 1994 as she poisoned his food.

In the early hours of the following morning the ambulance men she called to the couple’s home in Douglas Close, and found Mr Webb had been dead for hours.

The following day Thompson contacted the newspaper where Mr Webb worked as an advertising executive and asked about claiming his death benefits.

Detectives who reinvestigated the case found a new witness Don Hutson, an American who met fellow angler Mr Webb as he was trying to set up a new life in Florida.

He said his suspicions that Thompson had murdered her husband were ‘off the scale.’

She had told him Mr Webb had taken sea sickness pills, anti-histamines, aspirin and had drunk heavily with a fiery curry he eaten at a restaurant to celebrate his birthday.

Thompson said her husband was taking steroids and was so overweight that four paramedics had to to carry him to the ambulance.

She told ambulancemen she had spoken to him minutes before she called them – but they found he had been dead at least two hours.

A STRING OF FORMER LOVERS

The detectives tracked down two more of Thompson’s former lovers who had been conned by her.

She met Graham Binks through a lonely hearts column in a local newspaper in 1997 and moved in with him weeks later.

Thompson told him she was dying of cancer and invited him on an all expenses paid trip to Orlando, claiming she was a successful businesswoman.

In fact Mr Binks was paying for the trip himself because Thompson had intercepted his mail and stolen his credit card taking £4,404.

Phil Trott met Thompson in a Worthing haberdashery shop and she asked him out for a date.

Thompson told him she had throat cancer and would be dead within weeks as she plundered £500 from his bank account.

In court ‘The Black Widow’ appear to wipe away a tear as the Judge Michael Hyam told her: ‘You no doubt thought you would benefit financially from Mr Webb’s death.

‘What you did was utterly ruthless and without any pity. Nothing can excuse you for the wickedness of what you did.’ 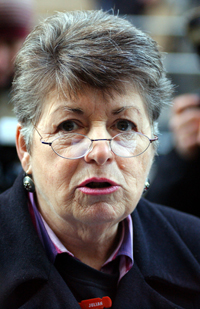 Julian Webb’s mother, Rosemary Webb said after the case: ‘The circumstances surrounding his death have been the source of great pain to me and my family.

‘Even now, only one person knows what really happened and she is not saying.

‘Those of us who knew Julian well know that he would never have committed suicide.’

‘For a decade she has degraded men sexually, financially and physically.

‘Men across southern England can sleep safe, knowing that she is off the streets.’