Dobson and Norris: The Murder of Stephen Lawrence

The two racist killers who murdered black teenager Stephen Lawrence were detained at Her Majesty’s Pleasure nearly 19 years after they stabbed him to death at a bus stop.

Gary Dobson, 36, and David Norris, 35, were part of a gang of white youths who targeted the 18 year-old A-level student and his friend Duwayne Brooks because of the colour of their skin.

Stephen was stabbed twice after being ‘swallowed up’ by the gang in Well Hall Road, Eltham, southeast London, just after 10.30pm on April 22, 1993.

The pair were convicted of murder after a two-month trial at the Old Bailey.

Dobson must serve at least 15 years and two months, while Norris, the son of notorious south London drug lord Clifford Norris, was handed a minimum term of 14 years and three months.

Mr Justice Treacy stressed that he was bound to sentence Dobson and Norris as juveniles under the law as it was in 1993.

‘It may be that the resulting sentences are lower than some might expect,’ he said, ‘but the law as laid down by Parliament and must be applied and I am constrained by it.’

The minimum term for a similar crime, committed by adult defendants, today would be around 30 years, while in 1993 it would have been 15 or 16 years, he added.

He said the starting point under the old legislation was 12 years for juveniles, but he would adjust this upwards.

‘The gravity of this case is in my view of a different order from, for example, a murder committed by one individual upon another as a result of some sudden quarrel,’ he said.

‘There was a degree of general premeditation; it was a racist crime driven by hatred; it involved a gang of like-minded attackers; a lethal weapon was employed and known in advance to be carried; the victim was completely blameless and helpless.

‘The high level of public interest in this case is at least in part a reflection of the abhorrence felt by right-thinking people at the nature of this crime.

‘This, too, should be reflected in the sentence.’

He said of Norris’s conviction for threatening Pc Reid: ‘This confirms my view, and no doubt that of the jury, that you were a violent racist in 1993.’

Stephen’s estranged parents Doreen and Neville, who have fought tirelessly for justice for their son, were in court with brother Stuart to see their son’s killers finally brought to justice.

The murder was Britain’s most notorious unsolved case and led to radical changes in modern policing after a public inquiry found the Met Police was ‘institutionally racist.’

Stephen had been waiting for a bus with Mr Brooks, also 18, when they were approached by the gang who were heard to shout ‘what, what nigger’.

Witness Royston Westbrook, a hospital worker, said it took just 10 seconds for the gang to attack.

‘He went down, basically through sheer weight of numbers, in the middle. He was completely surrounded,’ he said.

David Shepherd, a neighbour of the Lawrence’s who was also at the bus stop, heard the attackers ‘cheering’.

Stephen was stabbed twice, the first close to the victim’s collarbone, the second to his left shoulder, both wounds severed arteries.

He managed to escape and run after Mr Brooks, who had also struggled free, but Stephen collapsed in a pool of blood a short distance away – a spot now marked with a memorial in his honour.

Mr Brooks sobbed in the witness box as she demonstrated the ‘over-arm’ motion used to stab Stephen.

‘He jumped up and ran across the road and was asking me to tell him what was going on,’ he said.

BLOOD STREAMING DOWN HIS LEG

‘He couldn’t run properly. He had blood streaming down his leg from his jacket.’

Stephen died at the nearby Brook Hospital in Shooters Hill within an hour.

The original investigation, described as ‘palpably flawed’ was dogged by controversy, allegations of racism, corruption and collusion.

Five prime suspects, including Dobson and Norris, were identified almost immediately, but although some faced charges the case against them collapsed. 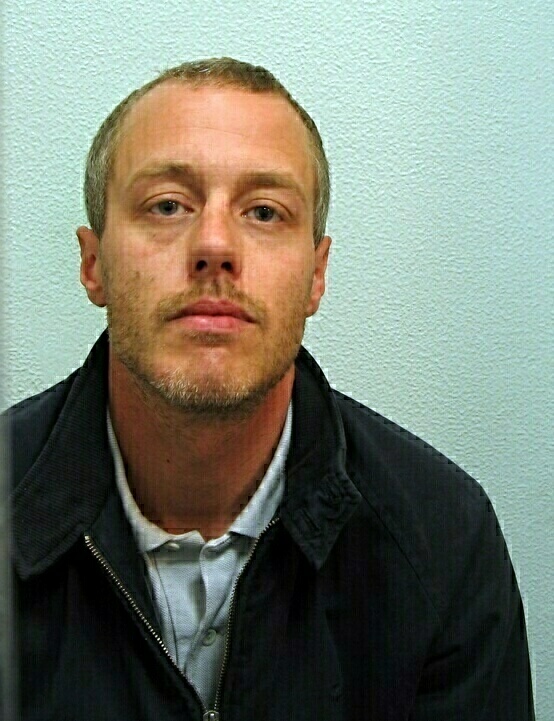 A private prosecution, brought by the Lawrence family, failed in 1996 with three suspects Dobson, Neil Acourt and Luke Knight being acquitted on the direction of the trial judge.

In 1999 report by Sir William Macpherson, which followed the Stephen Lawrence Inquiry, that heaped damning criticism on the Met force.

Among Sir William’s 70 recommendations was the proposal to change the 800 year-old ‘double jeopardy’ law to allow previously acquitted suspects to be retried, which was finally adopted in statute in 2005.

Dobson and Norris were finally trapped after an expert review of forensic evidence from the original investigation, which began in 2006.

The re-examination was inspired by the successful conviction of Ricky and Danny Preddie for the manslaughter of 10 year-old Damilola Taylor, as a result of innovative new forensic techniques.

Scientists looked again at Stephen’s clothing and items seized from the suspects in 1993 and discovered microscopic amounts of new evidence which gave a ‘direct link’ between Dobson and Norris and the murder.

THE INVISIBLE SPECK OF BLOOD

In 2008 a blood spot, measuring just 0.25mm by 0.5mm, was found on the collar of a jacket seized from Dobson, which provided a one in a billion DNA match to Stephen.

Further dried blood fragments were also found in the evidence bag the coat had been stored in.

The total amount of blood particles found no more than two cubic millimetres.

Eleven pink and orange cotton or polyester fibres, from Stephen’s red polo shirt, were also found on Dobson’s jacket, along with two green and blue strands from Stephen’s corduroy trousers.

Six green and blue fibres were found on Norris’ blue sweatshirt, along with an orange cotton fibre from the polo shirt. 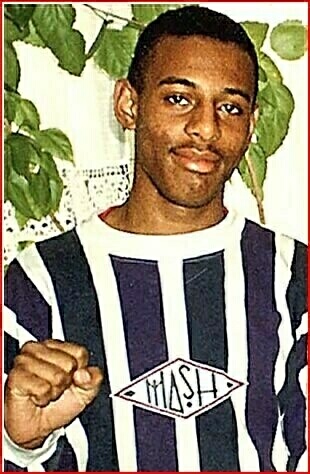 The iconic picture of Stephen

Among debris collected from the packaging which held Norris’s jeans scientists recovered a 2mm and 1mm fragment of afro-Caribbean hair.

Prosecutor Mark Ellison QC said: ‘The material discovered on each of the defendants’ clothing indicates that they must have been members of the group that attacked Stephen Lawrence that night and they are guilty of his murder.’

He said the ‘only discernable reason for the attack was the colour of their skin.’

The pair were arrested and charged in September last year and faced trial after Dobson’s previous acquittal was successfully overturned at the Court of Appeal.

In court their lawyers claimed the scientific evidence had been contaminated after years of mishandling of exhibits.

But Dobson and Norris were exposed as violent racists when covert surveillance footage taken in 1994 using a camera hidden in a plug socket in Dobson’s council flat showed them handling large knives and captured vile hate-filled rants.

The innovative forensic work has so far failed to uncover new evidence against the seven remaining suspects police have identified over the murder.

But Detective Superintendent Jill Bailey said she was ‘hopeful’ further scientific developments could yet lead to further arrests.

The Met’s Assistant Commissioner Cressida Dick welcomed the verdicts, but admitted it was a matter of ‘deep regret’ that it had taken 18 years to obtain a result.

‘I think this case is extraordinarily important not just to the Met but also to society at large,’ she said.

Dobson, who at the time was living in Phineas Pett Road, Eltham; and Norris, who lived in Berryfield Close, Chislehurst, denied murder.

Mark Ellison QC, prosecuting, told the court that Dobson and Norris would have to be sentenced as juveniles given their ages at the time of the murder.

He said the law ‘requires the law in a case of this age to sentence to effectively what would have been the punishment shortly after the crime had been committed.

‘In the context of this case particularly, the age of the defendants being 16 and 17, the punishment the court would impose would be very much directed at those ages.

‘I am required to draw to the court’s attention the starting point for a sentence of any offender under the age of 18 is with the minimum term of 12 years.’

Mr Ellison revealed that Dobson, who has previous convictions for theft dating from 1993 and 2000, is currently serving a five year jail term for possession of class B drugs with intent to supply.

He had been due for release in August this year.

Norris, whose criminal past includes convictions for driving while disqualified and theft, served a 12-month prison term in 2001 after racially abusing a black police officer.

The victim, who had been on his way home from Eltham Police Station, was crossing a way home on his way to a bus stop when Norris shouted slurs from a passing car, the court heard.

Mr Ellison said: ‘He started to cross the road and a Renault Clio was driven towards him at speed, ausing him to be alarmed.

‘The passenger leaned across and threw a paper carton at the officer and shouted the word “nigger”.’

Earlier when the jury verdicts were announced after nearly nine hours of jury deliberations Dobson shouted: ‘You have condemned an innocent man in here today’.

His mother Pauline, who was in the public gallery, said: ‘He did not kill that man.’

Stephen’s friend Duwayne Brooks, who was with him on the night of the murder, said via Twitter: ‘Some JUSTICE at last.’

Stephen Moses, defending Dobson, said his client had come from a ‘loving, supportive family’ and had no previous convictions at the time of the offence.

He left school with three GCSEs, had taken up an apprenticeship and was studying an IT course at a sixth form college in central London.

He added: ‘There is no evidence Mr Dobson was a lead or primary motivator of the group.

‘The eyewitness evidence places someone of an entirely different description in the leading role.’

Mr Moses said the fatal attack had not been premeditated and there had been no intention to kill.

Stephen Batten QC, for Norris, said he continued to protest his innocence in spite of the jury’s decision.

‘Mr Norris maintains he was not there,’ he said.

He added that there was some dispute between Norris and the victim of the 2001 racial abuse about the precise language used.

Mr Batten said Norris’ first wife had left him because she ‘could not take the unwanted attention’ resulting from the Stephen Lawrence case, and he had not seen his two children with her since.

Norris failed to find a job because of his notoriety and had only ever worked for one year as an office fitter. 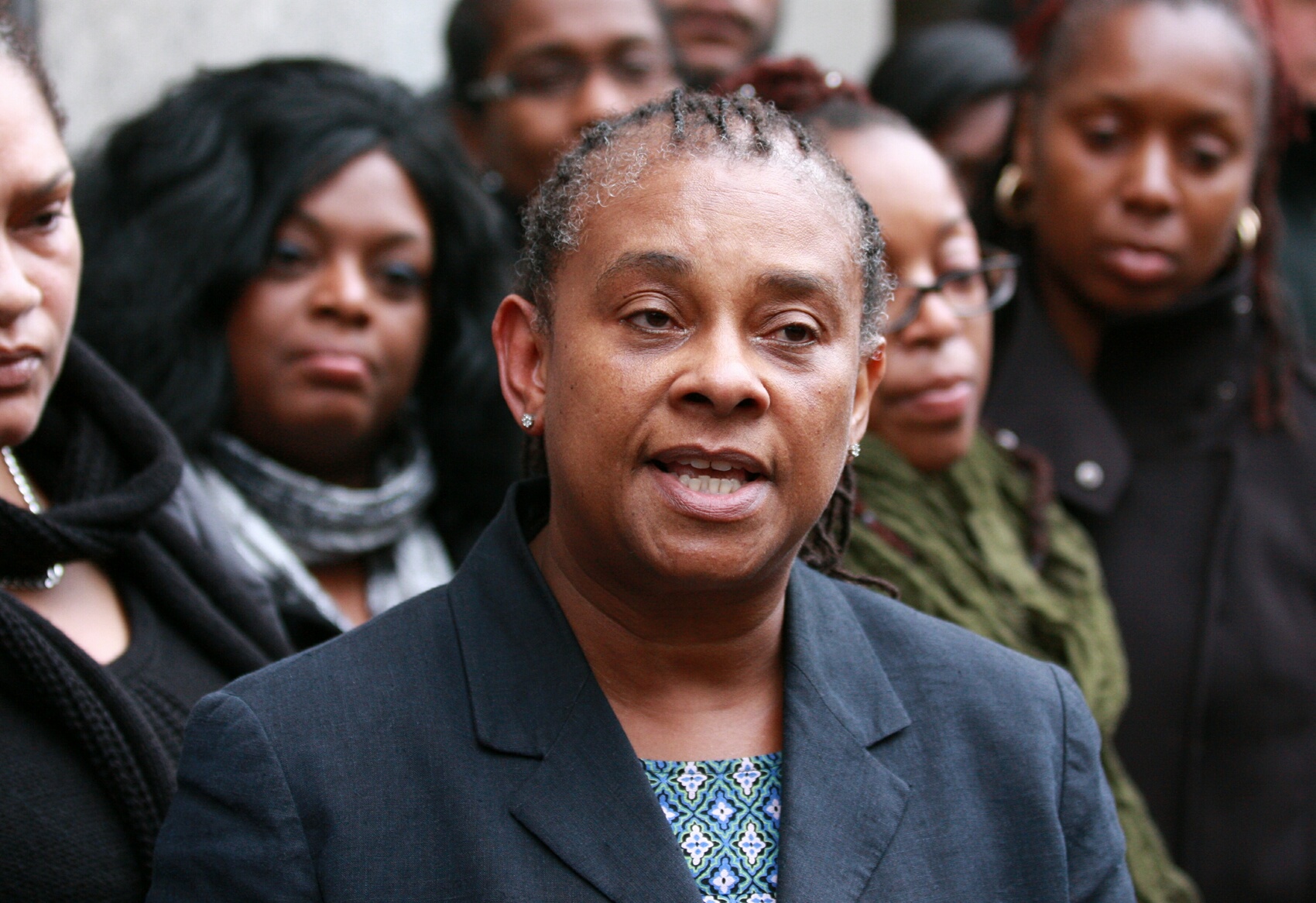 ‘David Norris is particularly conscious of the spin-off on to his family,’ said Mr Batten.

‘He has three children by his second wife – they, until today, had been sheltered from the worst of the allegations.

‘He has been beaten up several times, and there has been one recent attack while he has been on remand in Belmarsh.

‘His nose was broken, he lost a number of teeth – which has altered his voice – and he had four broken ribs.’

Stephen’s estranged parents Doreen and Neville emerged from the court to spontaneous applause and cheering.

Mrs Lawrence said: ‘All I now feel is relief.

‘Relief that two of my son’s killers have finally been brought to justice; relief that these racist men can no longer think they can murder a black man and get away with it.’

She added: ‘I feel relief to some extent that I can move forward with my life.’

Mrs Lawrence said she hoped the police had ‘learned their lesson and don’t put any other family through what we have been put through.’

She concluded by saying: ‘Racism and racist attacks are still happening in this country and we should not use my son’s name to say that they are not.

‘I want people to think of Stephen Lawrence other than a black teenager murdered in a racist attack in southeast London.

‘I know this is fact but I also want him to be remembered as a bright, beautiful young man.’