Thanos Papalexis: THE PLAYBOY, THE PIT AND THE PROSTITUTE

He was a millionaire who loved the playboy lifestyle. But while he played host to Bill Clinton at a glitzy party in a rented mansion Thanos Papalexis was hiding a secret – he was a ruthless killer.

She eventually flew to Britain to give damming evidence against him.

Papalexis, 37, fled to Florida in 2000 to start a new property empire and set about ingratiating himself with the social and political elite.

As he did so, he left detectives searching for clues in to the ‘Reservoir Dogs’-style murder of quiet introvert Charalambos Christodoulides, 55.

Mr Christodoulides had been tied to a chair and tortured before his body was dumped in a garage inspection pit at a deserted warehouse, where he had lived an unassuming life in a self-contained flat.

His death had baffled detectives, who were unable to understand who could have wanted to kill such a gentle recluse.

Before Papalexis had left the UK he had worked as a property developer in north London. 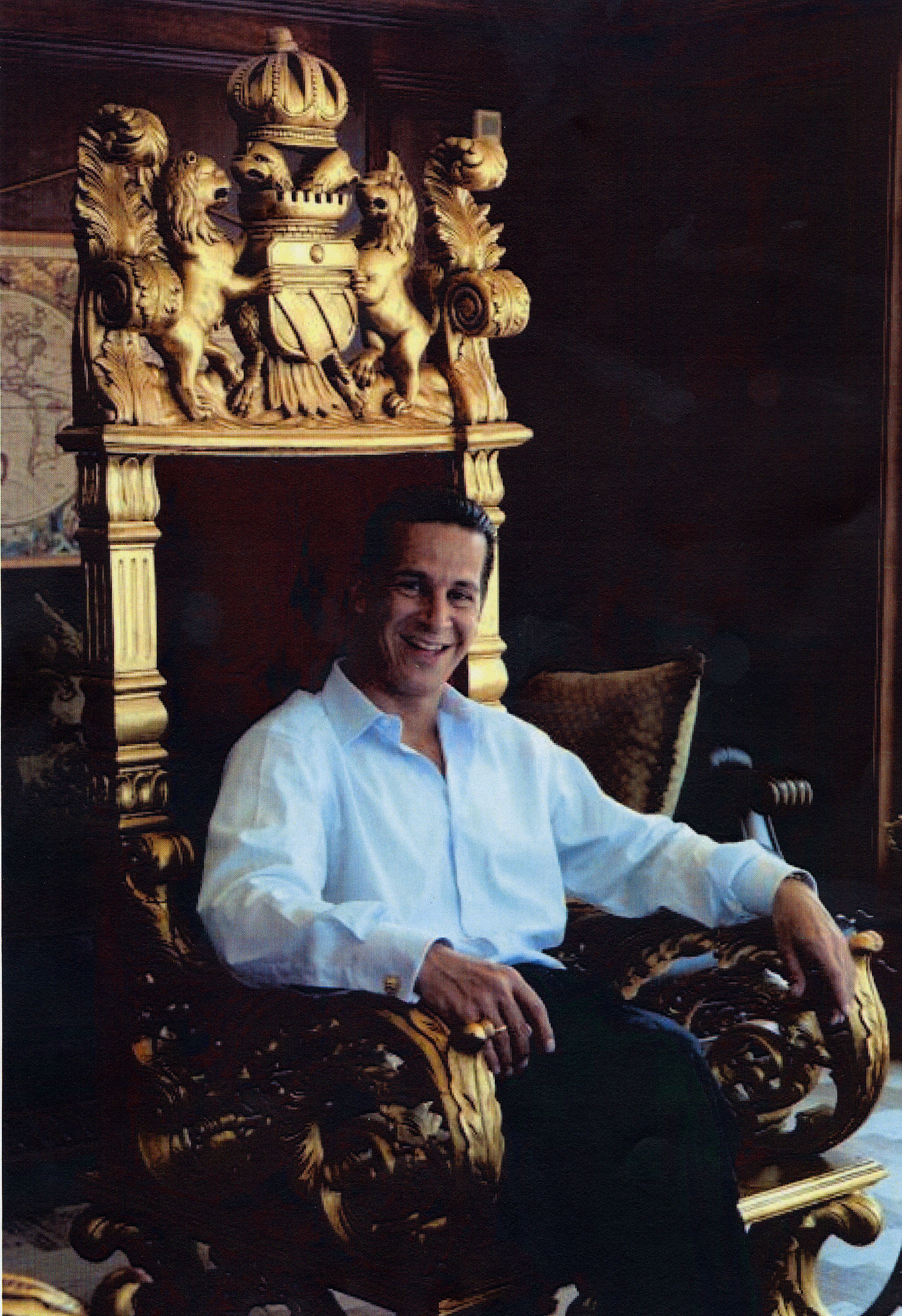 He was part way through a development in Holloway Road, Holloway, but had run up debts of more than £5m, despite a £1m injection from his wealthy father.

In December 1999 a £3m deal was set-up with businessman Michael Lanitis owner of a disused warehouse at Bannister Road, Kilburn, northwest London.

The price was later renegotiated to £2m, and a completion date set for March 2000.

Mr Lanitis was Christodoulides brother-in-law, having married his sister Annina, and had allowed him to stay in the flat.

Because of his huge debts Papalexis was unable to find the cash to make the purchase and instead agreed to ‘flip’ the property to another developer and ease the financial problems at Holloway Road.

Success hinged on whether Papalexis could release a £1.1m down payment on the property, which could be offset against his debts, but that could only happen if both deals went through simultaneously.

Papalexis mistakenly believed Mr Christodoulides, a sitting tenant, was holding up the deal and was so desperate for the transaction to go through his only option was to kill him.

Prosecutor Jonathan Laidlaw QC said: ‘The victim was a quiet, simple man who lived an isolated existence and he did not in any sense contribute to the circumstances in which he died.

‘It appeared that the victim was condemned to die for no better reason than he was not prepared to leave his home.’

Mr Christodoulides was last seen at the William Hill bookmakers in Edgware Road on the afternoon of March 9, 2000.

Papalexis enlisted the help of two failed Albanians asylum seekers Ylli (corr) Xhelo, 36, Robert Baxhija, 29, who worked for him on his building sites.

The three men went to the warehouse at 8am the following day to carry out the killing.

The attack started by a boat kept in the garage area, before Mr Christodoulides was dragged to an upstairs dining room where the torture continued.

He was beaten and strangled, before his body was doused in paint stripper, wrapped in a bedsheet and dumped in the inspection pit.

Papalexis returned later that afternoon to dispose of the body and remove all traces of the killing. But the developer left his fingerprint on tape stained with the victim’s blood and cigarette butts bearing his DNA was also found at the warehouse.

Within a week Mr Christodoulides was reported missing and despite a brief search of the premises the body was not found.

On March 25 specialist officers returned to the site with dogs and found the body covered with a duvet and cardboard boxes underneath a parked Mini Clubman.

Mr Christodoulides feet were still tied together and a bloodstained cord was around his neck. A woolly hat had been pulled over his face.

He had been strangled to death.

While the search for the missing man continued, Papalexis’s deal with Mr Lanitis collapsed completely and he was forced to hand back his set of keys.

This prevented him from entering the site once more to remove the body completely.

Papalexis was eventually extradited from Florida in December 2008, where he had set up a new life and home in 2000.

He was arrested at a trendy pizza restaurant in Palm Beach, having flown in from his bolthole in the Bahamas earlier in the morning.

Papalexis said he made the move for a ‘clean, fresh start’ after his London property development company flopped and the receivers were called in.

The self-proclaimed high-flying businessman admitted to making ‘significant’ sums of money in business deals while in the US.

But he also admitted during the trial that 2008 had been a bad year and there were a number of civil lawsuits being pursued against him ‘from various dealings’.

In January 2008 he held a fund-raising event for Hillary Clinton, as part of her bid to become the Democrat presidential candidate, and played host to her husband, the former President.

Both Clintons attended the lavish party at a rented £2.1m Palm Beach mansion and Bill made a speech to the assembled guests.

It was only in 2007 when his wife informed him that officers had approached her regarding the murder investigation, that he stopped his trips to the UK.

Instead he re-applied for his US visa in the Bahamas and hired a private detective across the Atlantic to report back on what evidence police had against him.

During a sex session at the Four Seasons hotel in Palm Beach in he told her: ‘I strangled someone. There was two people with me.’

The relationship ended soon afterwards and Miss DeFalco said nothing about the confession until Papalexis was arrested in December 2008.

She contacted US marshals with her evidence and flew to London to face him.

The call girl told the jury: ‘This man was giving him problems so they roughed him up a bit.

‘This man was in the way, he wasn’t doing what he wanted him to do. He gave him plenty of opportunity. He wasn’t complying to what he wants so they strangled him.’

Papalexis made a similar confession to his wife Karina, claiming ‘the man was in the way’ and to his privately-hired bodyguard, a former US Navy SEAL.

On a Wikipedia page that Papalexis created about himself in May 2008, he described himself as a ‘British born businessman generally credited with pioneering non-traditional and extremely effective negotiating methods and deal structures in the oil, shipping and real estate industries’

He also claimed to have ‘successfully negotiated with local militia groups to release commercial vessels that were being held hostage in the Shatt al-Arab river in Iraq during the unstable time after the US led invasion’ during 2002 and 2003.

Papalexis also alleged he was a survivor of the tsunami in 2004, while holidaying with his family in the Maldives.

He wrote: ‘Was able to evacuate his family to safety within hours of the disaster by persuading local airport officials to reopen the airport for a flight resultantly evacuating 300 passengers.’

But Detective Inspector Brent Hyatt, who led the investigation, described him as a ‘Walter Mitty’ character.

‘Thanos Papalexis is a man who had absolutely every advantage in life, but has proven to be outrageously devious, dishonest and callous.

‘A man that was entirely driven by selfishness and greed to an extent that I have never seen before,’ he said.

In court Papalexis maintained that he had never been at the scene and knew nothing of Mr Christodoulides’ death.

He claimed his confession was part of an elaborate story, in which he claimed to be a James Bond-type spy, to keep her relationship with DeFalco interesting.

‘I regaled her with stories that would make a screenwriter envious,’ he said.

‘I decided to lead an enormous fantasy. It was fantasy role play, which in light of what we were doing seemed to fit in. It created mystery and excitement.’

Papalexis was convicted of murder after a three-month trial at the Old Bailey and smiled as he was jailed for life with a minimum term of 20 years.

He branded Papalexis ‘totally amoral’ and said the failed businessman would do anything to ‘help achieve your own ends’.

‘You don’t think twice about doing or saying anything that occurs to you may help achieve your own ends whether in your personal life or business life or however much your deeds or words may offend against the law or moral standards of ordinary decent people or both,’ said the judge.

‘You treated Charalambos as utterly expendable when it came to achieving your own goal of salvaging your property development career and changing a financial disaster in to a spectacular success.’

The victim’s sister Annina Lanitis said: ‘I truly believe he is like a devil for what he has done.

‘Regardless of the length of sentence given to Papalexis it will never justify how a multi-millionaire playboy can put the value of money over and above the life of my innocent, harmless brother, without any provocation on my brother’s side.

‘Without being vindictive I wish him as much pain and suffering as I have suffered and will continue to suffer throughout my life. We have been given our own life sentence without any just crime.’

Henchmen Xhelo and Baxhija were both illegal immigrants and claimed benefits while working as builders on the tycoon’s properties.

In a ‘cut throat’ defence Xhelo and Baxhija both denied taking part in the murder, but claimed their boss had forced them to clear up the scene at gunpoint. They were convicted of murder after a retrial.

Judge Roberts told them: ‘Papalexis was calling the shots and you were doing his bidding’.