JONATHAN KING: THE LURE OF CELEBRITY

Overthree decades he carved out a hugely successful career as a pop singer,record producer, TV and radio presenter and journalist.

But King’s trademark lop-side grin masked the lust of an insatiable paedophile who trawled the streets of London in his Rolls Royce looking for impressionable youngsters to corrupt and defile.

His opening remark to his young victims was often simply: ‘Do you recognise me?’

Described in court as ‘a singer who can’t sing and a writer who can’t write,’ King first tasted stardom aged 19 when his debut single ‘Everybody’s Gone ToThe Moon’ was a top ten hit in 1965.

As his multi-faceted careertook off, King rubbed shoulders with some of the industry’s biggest names, including lyricist Sir Tim Rice, who hobbled into court on crutches to give evidence for him.

When asked by his barrister to sum up his life’s work in one word King proudly announced: ”Music”.

It was the celebrity gained from the pop world that King cynically abused to lure star-struck teenagers into the perverted world behind the closed doors of his home in London’s fashionable Bayswater.

PERVERT IN A ROLLS ROYCE

Using a tried and tested method he had perfected, King would often stalk his quarry in one of his four Rolls Royces. 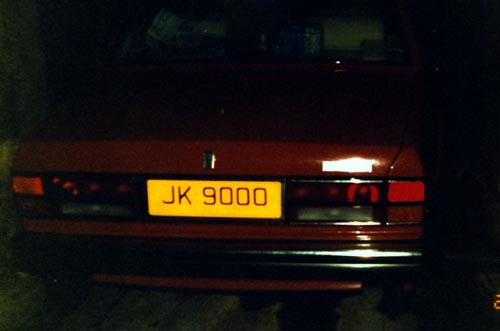 The Roller…King picked up youngsters in this car

After introducing himself, King would brag of the celebrities he knew, then invite the youngsters to his home, often claiming he wanted their opinions on music or television.

‘It is perhaps easy to imagine how these young gentlemen were flattered and excited to receive this attention. He exploited his celebrity,’ said prosecutor David Jeremy.

Few could resist his promise of meetings with his pop star friends, available women, or both.

King would woo the youngsters with talk of his successful pop career and the prospect of being a ‘megastar’ like himself.

One victim,now a 38-year-old painter and decorator from Luton, said: ‘This pumped me up as a child thinking I might be famous – I was just hopeful I would make something of my life.’

Sat on the sofa at the mews house the teenagers were offered a drink as King then showed them pictures of naked women, often dropping in one of himself scantily clad, which he would pretend to hide in embarrassment.

The youngsters were led upstairs where King showed them a pornographic video, or in the early days, an 8mm cine film which always featured men and women. 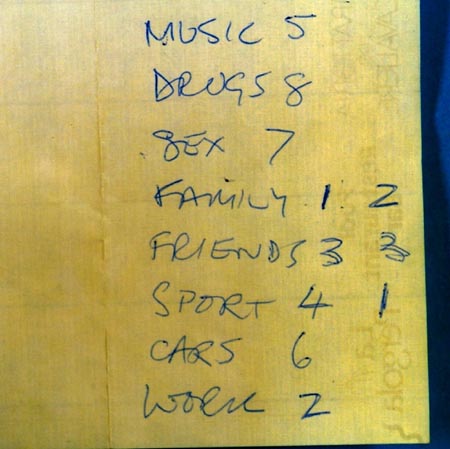 Nonsense list..King pretended to parents he was surveying his victim’s interests

It was then Jonathan King would slip out of his shorts and t-shirt to take advantage of the aroused and giddy teenager.

Before they left King, ever the self promoter, would present them with a signed copy of his ‘greatest hits’ album or his latest book.

Others were given up to £40 for ‘expenses,’ digital watches and the promise of a trip to New York.

When one lad was disgusted by the experience and fled from the bedroom, King gave him his personal hi-fi which turned out to be broken.

Many of his victims were convinced no-one would accept their allegations against a household name and King knew it.

One told the court: ‘I didn’t think anyone would believe me.’

The star was so confident he would never be caught that some victims were invited back to his house time and time again.

Often they were encouraged by the victim’s parents who were thrilled their son was working with a celebrity and completely taken in by his claim that he simply wanted a genuine opinion on music or television.

He even had a meal with the family of one victim, who said: ‘He wooed them over pretty much.

‘He made them feel absolutely comfortable as he chatted away at the dinner table.

‘He told my parents I had helped him and been a great lad. They were so pleased – my brothers and sisters were very excited indeed.’

As the flattered youngster became the envy of the school playground, his proud parents told friends how their son was a close friend of a personality.

But it was the success of Jonathan King’s system that would lead to his ultimate downfall.

In November 2000, one of the victims called Surrey police with the first allegations to be made against King.

Detectives interviewed the star and seized pornographic pictures and videos from his home.

King denied ever meeting one of the victims – a 15-year-old South African -until police produced a photograph recovered from his home showing the boy posing in his bedroom.

The storm of publicity surrounding his arrest was enough to convince other victims to come forward.

One victim, now a 35-year-old blacksmith from Shrewsbury, told how he was abused repeatedly aged 14 and still suffers depression today.

He sobbed as he told the court: ‘I just feel so stupid now.

‘THIS CANNOT BE ABNORMAL’

‘It was very confusing at the time. For who he was and because of his fame I just thought this cannot be abnormal.

‘He had a way with words. The way he spoke just made it all seem normal. Now it just seems absolutely ridiculous.’

For 17 years he felt totally alone in his torment and was too ashamed to tell his secret to anyone hoping one day he would forget.

‘I just wanted it to disappear. I couldn’t tell anyone. I’m only interested in women and didn’t want anyone to know I’d had an experience with a man.’

One victim cannot bring himself to cuddle his partner’s child because of his abuse.

Another has received counselling to help overcome the ordeal at Jonathan King’s hands which he says ruined his life.

A Cambridge boy who was then aged 14, now aged 37, said he went back to the pop star’s home at least five times and was once assaulted in his school uniform.

‘He kept promising he would get some girls round. Everyone was interested in girls at that age,’ he recalled.

‘Back then I always thought he liked me and he treated me as a friend – he was the beginning of what ruined my life, I found it so hard trying to blank it out.’

INTERVIEW WITH AN ASTRONAUT

In a letter to one of his five victims King bragged about interviewing astronaut and presidential candidate John Glenn, and singers Billy Idol and Kenny Rogers.

King added: ‘Perhaps one day you will go on to be a megastar.’

In his correspondence, Jonathan King never forgot to encourage his victims look out for his latest programme.

Arrogantand smug to the end, the star told the court he had met up to 30,000 young people to survey their opinions ‘things that matter to teenagers’- sex, drugs or the latest television show.

He ridiculed allegations found proved by the jury that he had tailed a young boy into a Soho peep show and committed a sex act with him in the booth.

‘That’s absurd. I was much better known back then. Today, that would be like Robbie Williams going into a peep show with a young boy,’ he said.

‘The owner would call a newspaper, and when the waiting paparazzi snapped him the moment he left the premises, it would be the next day’s front page.’

He added: ”Market research is something I’ve always done and it was something the music companies I acted for knew I did and were keen to benefit from the material I had already.

‘It consisted of trying to find out what young people liked. I would talk to them, listen to them, and ask for their opinions on records.

‘Speaking to them is enormously beneficial in finding out changing tastes.’

Not a happy bunny…Tim Rice gave evidence for King, but was not keen to be photographed

When police raided King’s home they discovered ten travel bags packed with clothes ready for his next trip at short notice.

In each bag was the same Polaroid of a young naked girl holding a banner reading, ‘Let’s Do It!’

In a first trial King denied buggery, attempted buggery and four charges of indecent assault between 1983 and 1987.

The jury of seven men and four women – one woman had been excused -deliberated for two days before unanimously finding Jonathan King guilty of all charges.

Immaculately dressed in a smart grey suit, favoured yellow shirt and shiny blue tie, he clasped his hands behind his back as the verdicts were announced.

King had maintained his crooked smile throughout the trial but shuddered visibly after the foreman announced the first finding of ‘guilty.’

In a second trial a music producer claimed he was abused when he was 15 after a school disco – the notorious “Walton Hop” where King was guesting as a DJ in 1977.

He said King offered him a lift home but instead parked in a secluded lay-by before marching the lad into woodland and subjecting him to a serious sexual assault.

The pop promoter was cleared of the allegations and those of a second boy after the victim’s recollection of dates was found to be incorrect.

King straightened his tie, politely bowed to the judge and nodded towards the press bench at the Old Bailey as he was led from the dock tobegin a seven year jail term.

Judge David Paget, QC, told King:‘You used your fame and success to attract impressionable, adolescent boys and abused not the trust of them but the trust their parents placed in you.’

The judge said Jonathan King had led a’successful and distinguished career’ and accepted part of his punishment will be the ‘loss of his name.’

He said: ‘The inevitable publicity will be considerable punishment and your time in prison will not be easy.’

The judge added that King had caused ‘considerable emotional and psychological damage’ to all five of the victims.

King was placed on the Sex Offenders Register for life and banned from ever working with children.

He has now been released but claims to have enjoyed his time in jail.