THE MYSTERY OF BROOKFIELD FARM

Husband Martin Baker killed his wife because she wanted a divorce and disposed of her body so thoroughly that no trace has ever been found after a four year investigation.

The former SAS soldier was violent to his previous wife and detectives believe he could have given away what would happen to Tina when he threatened her in a row.

Baker told Gillian Hopkins: ‘Do you realise I have got the power to make you disappear permanently – cut you up and feed you to the pigs.’

Tina Baker had vanished before without telling her family where she was going and she was not reported missing for two weeks after she was last seen alive.

The delay would have given Baker all the time he needed to dismember his partner and feed her to the animals who relish meat of any kind – even pork.

Their powerful jaws can crush bone and a they would have been packed off to the slaughterhouse before the police had even arrived to search the farm.

Brookfield Farm at Chobham, Surrey, stretches over 14 acres and includes a landfill site.

It is possible Baker simply buried his wife there, or disposed of her at another site miles away.

PHONE IN THE RESERVOIR 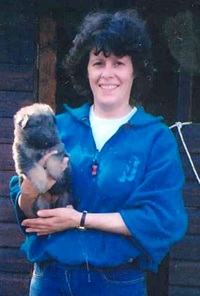 When he reported his wife’s mobile was missing he said she had dropped it in one of the many reservoirs that surround Brookfield Farm.

Baker may have simply weighed down his wife’s body and thrown her into the water.

Her death was the end of their final row which began simply because she fed some puppies duck eggs.

Tina was so besotted with her animals that some friends thought she was ‘irrational.’

Baker, who worked as a machinist at Wilburn Engineering in Egham, Surrey,was already keeping some animals at his garden when they met through his lonely hearts advertisement.

The couple were married in 1996 and two years later fulfilled a dream when they bought the farm together in Pennypot Lane.

Tina was a poultry enthusiast and kept rare breeds of Japanese chickens, together with the pigs, goats and horses.

But Bakerwas ‘overbearing, possessive, threatening, bullying and aggressive’ and within a year she had left him for the first time.

His first wife had three children by Baker but told how he had beat her up so badly during their 13 years marriage that her ears were ringing for months afterwards.

Baker also pinned her against the patio door and put a knife to her throat in the middle of the night. He and was only stopped by one of his twin daughters.

Mrs Hopkins said: ‘If they hadn’t come in God knows what would have happened.

Daughter Natalie Baker told the court: ‘I really thought he was going to slit her throat.’

As their marriage unraveled Baker became obsessed with knowing every detail of what his wife was doing and with whom.

He even stalked her in a car she would not recognise, disguised in dark glasses and a wig.

In 1999 Tina was so fed up with Baker belittling her she went to live with friend Paul Hill without telling her parents where she was.

When he found his wife he pestered her repeatedly until she agreed to go back to him.

But after he had won her back Baker soon reverted to his old ways, insulting her in public and generally doing his wife down.

Tina’s father Geoffrey Doyle recalled he had never heard Baker utter a single word of praise for his daughter.

She began spending more nights sleeping in the Portakabin on the farm and started an affair with an old school friend Derek Poplett. 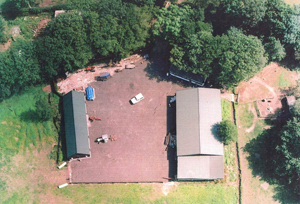 The final straw came when some of her puppies died because she fed them the duck eggs which gave them salmonella.

Baker mercilessly blamed her and she was so upset she walked out never to return.

Her husband refused to accept the marriage was over and would follow his wife to her parent’s home in Shepperton, Middlesex, when she moved in with them.

He again pestered her with phone calls and tried to get friends to act as intermediaries for a reunion.

Baker found out she was seeing Mr Poplett and there was ‘an unpleasant scene’ outside the lover’s house a few days before Tina vanished when the former SAS soldier threatened to kill him.

Tina had refused to sign the farm over to Baker and he was terrified that Mr Poplett could end up in control of it.

Baker described him as a ‘council bum’ and five days before his wife disappeared he told a friend: ‘I’m not having no long haired misfit end up with my farm.’

Prosecutor Mark Dennis said: ‘She wanted a divorce. There was no turning back and she wanted some money from the property.’

Baker knew his wife was coming to the farm to feed her animals on the morning of July 8, 2002 after spending the weekend with Mr Poplett and lay in wait for her there.

He planned the murder with military precision and would have known exactly how he was to dispose of her body and car before he killed Tina.

On the day she vanished Baker made a series of calls to a friend who ran a scrapyard where detectives believe he may have disposed of Tina’s red Vauxhall Astra.

Police examined the farm for signs of recently disturbed land but only dug up the area around a farm bonfire and found nothing.

Baker insisted his wife had simply vanished. In the following year Baker allowed his wife’s name to be used to re-register a friends BMW – and showed the documents to friends claiming it proved she must still be alive.

But her bank account remained untouched and a £10,000 reward and a reconstruction on TV’s Crimewatch failed to turn up any new leads.

Baker was so confident he was in the clear that heturned their former marital home in Ayebridges Avenue, Egham, into a skunk weed farm. 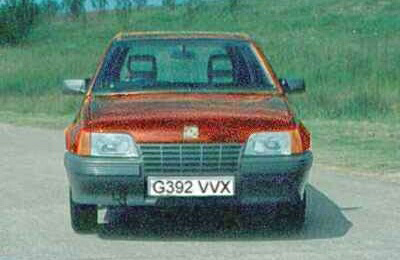 When police called at the bungalow early on November 18, 2004 they found 258 cannabis plants, £3,000 in cash as well as lights and growing equipment.

Baker claimed the farm had been organised without his knowledge to two tree surgeons who rented the bunglalow, but he was convicted at a trial.

In October last year police also charged him with the wife’s murder after the passage of time convinced the investigation team he must have killed her.

Baker insisted she had simply vanished and is unlikely ever to tell police what he did with the body to finally solve the mystery of Brookfield Farm.

One detective said: ‘The real tragedy in the case is that Tina’s family will never be able to grieve properly without knowing where her body is.’

Baker was jailed for life will serve a minimum of 14 years.

Judge Paul Focke QC told him: ‘As a result of your jealousy and financial concerns you lay in wait for her on July 8 when she was due to arrive and feed the animals.

‘You promptly killed her and disposed of her body and motor car so that not trace of either has ever been found.’

Those who are interested in a career fighting crime should consider entering the Regis online criminology masters program.