Rolf Harris: The End of Innocence

by Siba Jackson
For six decades, Rolf Harris was one of Britain’s most cherished TV personalities, even counting the Queen among his army of admirers.

He carved out a wildly successful career as an acclaimed artist, presenter and musician, winning the hearts of millions with the off-the-wall sounds of his ‘wobble board’ and didgeridoo.

‘Rolfaroo’ capitalised on his cuddly and gentle image as a family-friendly entertainer.

He even fronted educational film Kids Can Say No!, filmed with guidance from the RSPCA, to warn youngsters about the dangers of abuse.

But his adoring public was blissfully unaware of the sinster demon lurking beneath Harris’ charming exterior.

For too long, the silver-haired sex pest pulled the wool over the nation’s eyes, using his fame to fulfil his insatiable lust for children and live a sordid double life.

Harris’ conviction for 12 counts of indecent assault between 1968 and 1986 has shattered the memories of legions of loyal fans who idolised him as they grew up.

And he now faces further charges after more women came forward, with at least 12 staking a compensation claim on his multi-million pound fortune.

The fresh allegations come amid bombshell claims that Harris was pals with Britain’s most prolific paedophile, Jimmy Savile.

He and the Jim’ll Fix It pervert have been branded ‘birds of a feather’ who ogled vulnerable patients as they undressed at Broadmoor psychiatric hospital. 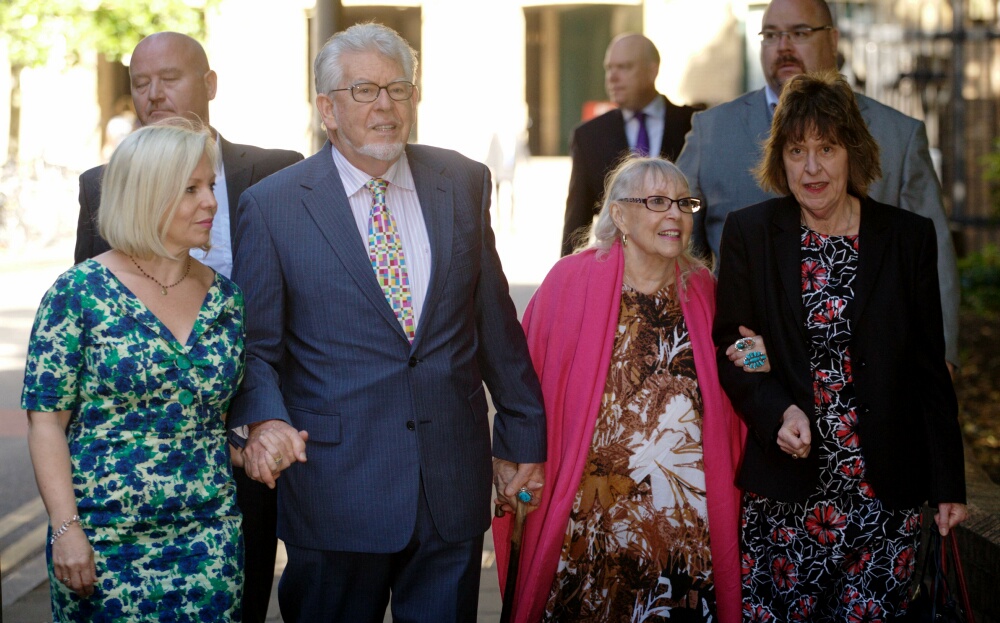 Pervert…Harris and his family arrive at court

And like Savile, Harris believed he was ‘untouchable’ as he pounced on his prey, robbing them of their innocence.

He was convinced his celebrity status made him immune from prosecution as he conducted his sickening campaign of abuse in plain sight of others.

The Aussie performer targeted his youngest victim, a seven-year-old girl, on stage at a crowded community centre in Portsmouth after singing his hit Two Little Boys in 1969.

As his career skyrocketed, Harris proved he was prepared to stop at nothing in pursuit of his depraved desires.

One witness told how Harris was dubbed ‘The Octopus’ for his wandering hands, an open secret in industry circles.

He brazenly groped TV presenter Vanessa Feltz live on air during an episode of The Big Breakfast, it is claimed.

The blonde broadcaster, now 52, alleges Harris slipped his hand up her skirt and pinged her knicker elastic.

Long-suffering wife, Alwen Hughes, is said to have been in the room when Feltz interviewed Harris during the ‘On The Bed’ section of the light entertainment show, in May 1996.

The cartoonist also cracked jokes in a packed London pub while he molested child actress Tonya Lee in 1986.

Aussie Ms Lee, then aged 14, told how she battled bullimia and anorexia for years as a result of her ordeal.

Harris was surrounded by fans when he fondled the bottom of a teenage waitress during filming of ITV show Star Games, in Cambridge during the 70s.

He furiously denied visiting the university city until three or four years ago.

But he was forced into a humiliating climbdown after bombshell footage of the show, hosted by veteran presenter Michael Aspel, was unearthed.

The bearded entertainer also mauled a mother and daughter within moments of each other during an art presentation in Oz.

And he uttered the chilling line ‘Rolfie deserves a cuddle’ to a petrified teenager after cornering her in a lift at a motel in Sydney.

But by far the most damning claims proved to be from the former childhood friend of Harris’ daughter, Bindi Nichols. 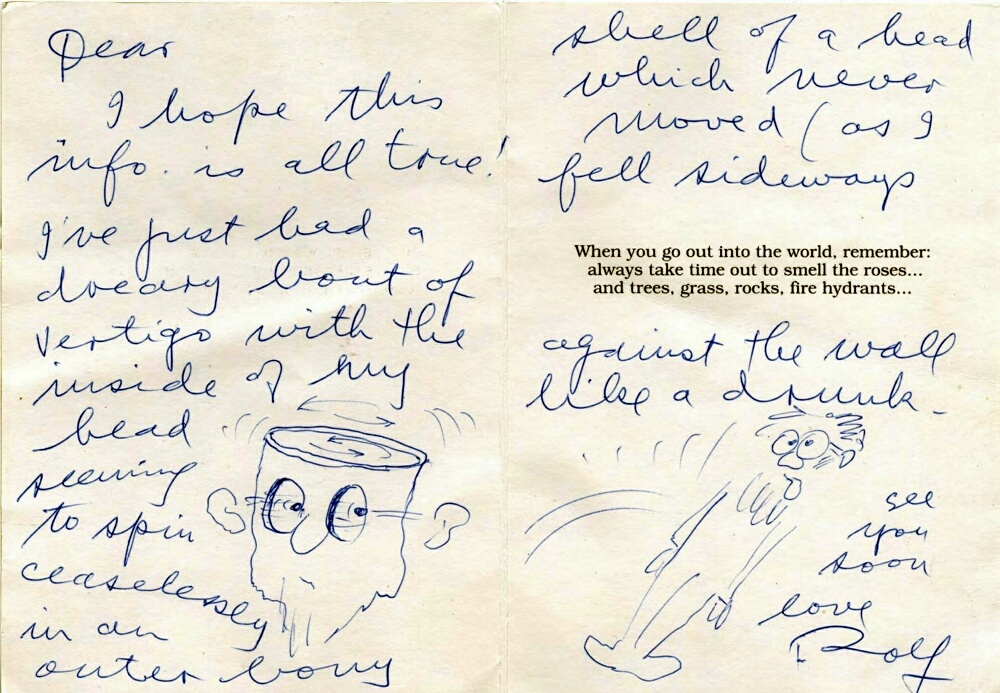 Letter…Harris wrote to one of his victims

The octogenarian spent 16 years grooming the girl, getting a grotesque thrill from touching her while his only child slept in the same bed.

Animal Hospital star Harris treated her like a ‘young puppy’, leaving her ‘dehumanised’ with no option other than to drown her sorrows with a ‘shedload of gin’.

The entertainer couldn’t resist temptation when the girl accompanied his family on holiday to Hawaii and Australia in 1978.

He repeatedly abused the young teen, then aged 13, after drooling over her body in a flesh-coloured bikini.

It was only the start of her ordeal, which saw her being ‘psychologically dominated into womanhood’.

Prosecutor Sasha Wass QC described how Harris used the girl, 35 years his junior, as a ‘blow up doll for sex’.

Referring to claims she gave Harris oral sex in a layby, the barrister told jurors: ‘She was performing for him clinically, like a prostitute’.

He wrote a letter to the girl’s father begging for forgiveness after the sordid details emerged in 1997.

She confided in Bindi after learning that love-rat Harris was also having an affair with his ‘spiritual healer’, Andi Kingston.

But he doggedly protested his innocence over the abuse claims, insisting she ‘willingly’ took part in a consensual relationship after ‘coquettishly’ flirting with him as an adult.

And despite being old enough to be her grandfather, Harris desperately tried to wriggle out of trouble by telling her brother: ‘It takes two to tango’.

It was just one of a number of ruses Harris adopted in a desperate bid to conceal his ‘Jekyll and Hyde’ personality.

He tried to present a sunny disposition when ‘waxing lyrical’ over his glittering TV career, reminiscing about how he gave the world the wobble board and chuckling during an improptu rendition of his popular song Jake The Peg.

But after failing to impress the jury, Harris resorted to the old fashioned defence of simply labelling his accusers as liars.

Despite the fact the witnesses did not know each other and had no apparent axe to grind, the entertainer maintained the claims against him were ‘made up’.

He proved to be his own worst enemy after conceding he had a ‘dark side’ hidden from his loved ones while giving evidence during his trial at Southwark Crown Court.

The convicted paedophile also allegedly viewed two scantily-clad girls wearing only their bras with a teddy bear in the foreground on site ‘Watch My Girlfriend’.

A total of 33 images are said to have been unearthed on Harris’ Apple Mac computer when Operation Yewtree detectives raided his luxury riverside home in Bray, Berkshire.

Police also claimed to have discovered a handwritten note in his diary with step by step instructions on how to delete his internet browsing history.

Prosecutors dropped four charges against Harris of making indecent images of children in the wake of his conviction for indecent assault.

He never entered any formal pleas to the allegations, which were severed from his trial to avoid prejudicing jurors.

The worker panicked after finding the unpleasant hoard and put the photos back, but alterted police after after the Savile scandal broke.

Officers found nothing after swooping on the property but the revelation put Harris on Scotland Yard’s radar.

In public, Harris has not betrayed a hint of emotion in the wake of his downfall, which has seen him dethroned as a national treasure.

He stood stony-faced in the glass-enclosed dock as the jury delivered their guilty verdicts following more than 35 hours of painstaking deliberation.

In the days that followed, Harris was stripped of his prestigious BAFTA Academy Fellowship and is almost certain to lose his honours including an OBE, MBE and CBE for services to entertainment and the arts.

In his native Australia, PM Tony Abbott has told of his ‘dismay’ at Harris ‘abhorrent crimes’.

And the once hugely popular ‘Boy from Bassendean’ has been banished from the suburb he grew up in, with officials wiping any trace of him in response to his ‘horrendous crimes’. 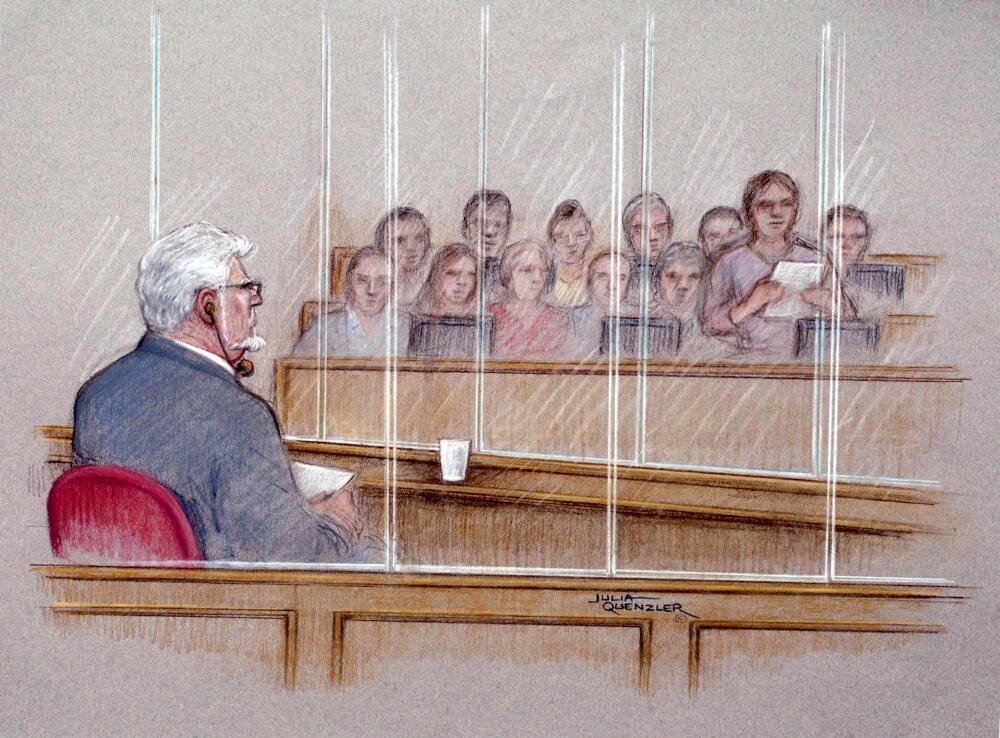 He is also being erased from a huge mural of Australian entertainers and is expected to lose his Order of Australia award, one of the nation’s most coveted honours, presented to him in 2012.

Passing a sentence of five years and nine months, trial judge, Mr Justice Sweeney, told Harris his ‘reputation lies in ruins’, adding he has no one to blame but himself.

‘You took advantage of the trust placed in you because of your celebrity status to commit offences against three of your victims.

‘All your offences in relation to (Bindi’s best friend) were committed in breach of the trust her parents placed in you and two took place in your own home.

‘In every case the age gap between you and your victims was a very considerable one.

‘You clearly got a thrill from committing the offences while others were present or nearby.

‘While such others did not realise what you were doing, their presence added to the ordeal of your victims.

‘It’s clear from the evidence that what you did has had a significant adverse effect on each victim – particularly so in relation to (Bindi’s best friend), who suffered severe psychological injury in consequence.’

Harris is the second person to be jailed as a result of the Operation Yewtree probe, which saw disgraced PR guru Max Clifford locked up for eight years in May.

Like Clifford, Harris was tried and convicted in the same court room and will spend his first days without freedom holed up in a tiny cell in south London’s notorious HMP Wandsworth.

But to the anger of anti-abuse campaigners, he is set to be transferred to cushy HMP Leyhill in Gloucestershire, dubbed the ‘Savoy of Slammers’ within weeks.