A ‘wicked’ curry house chef who murdered his family when his wife refused to help him renew his visa.

Mohammed Abdul Shakur, 47, killed Juli Begum, 26, along with daughters Anika, five, and Thanha, six, on 1 January 2007 after arguing with his wife about his immigration status.

The Bengali illegal immigrant went to her home in East Ham, east London having borrowed £100 from a colleague because Ms Begum had complained about how little money, he gave her.

He then had sex with his wife one last time before he smothered her with a pillow and strangled Anika with a white sock and fractured Thanha’s skull.

Ms Begum kept 22 carat gold necklaces, earrings and bangles worth £15,000 in her bedroom, together with a gold wedding set which has never been traced.

Shakur had a history of beating his wife and in June 2001, while she was pregnant with Anika, grabbed her neck and pushed her against the wall.

After the murders Shakur, who worked for £130 a day as a chef at the Ancient Raj in Frimley, Surrey, told friends his father had died in Bangladesh and bought a one-way ticket costing £340 to the sub-continent, flying out on 5 January, 2007.

When he bumped into Ms Begum’s sister a month later in the Sylhet district, he told her: ‘Don’t tell the police I murdered your sister.

‘If you tell the police I will murder you and your children.’

Shakur was finally extradited back to the UK in April this year and convicted of three murders by an Old Bailey jury.

Mrs Begum’s sister Sheli said the family entered a ‘dark world’ after the killings and the girls’ grandmother was tortured by the sound of them ‘calling out.’ 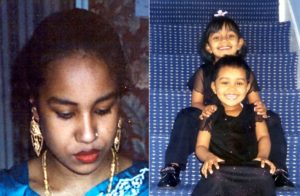 As members of the jury burst into tears junior prosecutor Kerry Broome faltered as she read Sheli’s statement and a police officer had to take over.

In her statement she said: ‘Juli was not just my sister. She was also my best friend. We spoke all the time on the phone. She was a person I used to share everything with and I was the same for her.

‘My nieces were like daughters to me. I feel the pain as much today as if it was yesterday that they died. I feel the loss of the women my nieces never got to become.

‘They used to talk non-stop. Anika used to love to play dress-up. Thanha was always reading a book. You would always find her with a book; she was very bright.

‘It upsets me so much to think about what they might have witnessed.’

She spoke of her mother’s reaction to the deaths, adding: ‘My mother would cry in the middle of the night. She would be so distressed. I would have to come and sit with her and calm her down.

‘She told me all the time, “they’re in my head. I can’t concentrate. I can’t sleep. I can’t eat”. She told me she could hear Thanha and Anika calling out to her.

‘She wanted to live and see justice but she died three years ago. I believe her death was brought about as a result of the stress from their deaths.’

‘I came out of this and tried to be more like the person I used to be. The trial has taken me back to the dark place. I feel empty.

‘I should have had my sister Juli with me. We should have been sharing stories about our children.

‘I live with this. It will be with me and my family for the rest of our lives.’

‘Quite what happened between you and Juli to course you to act as you did is something that only you will ever know, but clearly a huge row must have occurred between the two of you, resulting in a severe loss of temper on your behalf.

‘No doubt in an attempt to cover up what you had done you killed the two girls. It is difficult to adequately convey in words to anyone listening the sense of outrage.

‘This was a wicked, vicious and sustained attack on two little girls and on your wife, who, at four foot and eight inches and six stone and four pounds, was a tiny woman.

‘By contrast at around six foot and well built you were no match for her whatsoever.

‘It is difficult against that background to imagine three more vulnerable victims.

‘Thinking only of yourself you told a variety of people a tissue of lies when you were planning your escape and that remains the case to this day. You have not shown a single iota of remorse.’

Ms Banweyana described her as ‘always smiling and happy’ and would stop to talk to her.

She said: ‘The last time I saw Juli’s children was when they finished school for the Christmas holidays. The children seemed fine and very happy.’

She last saw Ms Begum when she was washing her husband’s car, on December 28, and they would talk unlike Shakur who ‘never spoke’ or would say hello.

Mr Spens said ‘The marriage between Ms Begum and the defendant was not a happy one.

‘It was beset by arguments about the defendant’s immigration status and his financial contribution towards the family outgoings.

‘The defendant came to the UK on a spousal visa and was dependent upon Juli for his right to remain in the UK and any extension of that stay.

‘The defendant would return home and tell Juli he had seen nicer looking women.

‘They argued and he told Juli: “If you don’t correct my visa and you don’t make me legal to stay in this country then I will kill you and kill your whole family,”.

‘He told her she was not beautiful, and he only got married to her so he could come to London and send money to Bangladesh.

‘Juli was worried that if the defendant obtained leave to remain in the country, he would leave her and marry someone else.

‘Juli was unwilling to progress his immigration application, as you can imagine, this was a source of friction.

‘On Wednesday 10 January 2007, Sheli Begum, one of Juli’s older sisters attended East Ham police station to report she had not seen her sister for ten days or her nieces for ten days.

‘The curtains were closed. The police could see a bed with covers on it, and underneath the top cover they could see the outline of a person.

‘Revealed beneath it was Juli lying on her back but that was not all. Lying diagonally across Juli was a child, Anika, face up with her head alongside that of her mother.

‘Whoever had killed them had not only taken care to place Anika’s body across that of her mother but he had also placed Thanha next to them on the bed and then he had also covered all three.’

Police found the sock used as a ligature on the bedsite table, a used condom and a sarong and carigan covering two large bloodstains.

Shakur married his cousin Ms Begum on 14 October 1999 in Bangladesh before returning to the UK.

A year later she sponsored Shakur and he was allowed entry into the country and moved into a house in Poplar.

In August 2000 Thanha was born and in September of the next year Anika joined the family.

By 2003 after rows about his contribution to the family income and his immigration status, she moved to Nelson Lane in East Ham.

‘It is the prosecution’s case that what caused the defendant to kill his wife is most likely to have been an argument about one or both of these issues,’ said Mr Spens.

He was arrested in Cachar, Assam, India on 23 May 2012 for these offences and extradited to the United Kingdom in April of this year.

Shakur, formerly of Whitechapel, denied three counts of murder but was convicted.

He was jailed for life with a minimum of 40 years.
ends

MEMO: NOT FOR PUBLICATION