A Roma gypsy family made regular return flights into the UK to pocket hundreds of thousands of pounds in benefits.
.
The gang cheated the UK taxpayer out of total of more than £800,000 in a sophisticated scam described by a judge as a ‘flagrant’ attack on the benefits system.

The fraud saw claimants use forged home office documents and job references to illegally obtain national insurance numbers, which they used to claim a range of state handouts.

Gang members claimed benefits under two different aliases at the same time, and boosted the payouts they received by inventing children, producing what they said were photographs of the non-existent youngsters.

Some of the claimants did not live in the UK at all while making benefits claims, with one woman making regular flights into the country from Romania to collect their payments.

Nine members of the gang were jailed at Southwark Crown Court today (tues) after they admitted a string of fraud charges.

Ringleader Telus Dumitru, 36, received a sentence of four years and eight months, while his wife Ramona, 33, was sentenced to two years in prison.

Her sister Claudia Radu, 35, who was arrested at Stansted airport after flying in to the UK to pick-up her latest set of handouts, was jailed for six months.

Their father Ion Stoica, 56, was also jailed for six months while Claudia’s brother-in-law Adrian Radu, 33, who had made repeated benefits claims while living in Romania, was jailed for 12 months.

Dorina Dumitru, 38, was jailed for one year and eight months, Marian Gheorghe, 34, for two years and four months, and Ion Lincan, 35, for four weeks.

Crooked Brit construction boss Abdel Lemsatef, 66, was jailed for nine months after he admitted supplying Dumitru with the forged job references the gang needed to get their hands on national insurance numbers.

‘It involved the use of Home Office forged documents which enable national insurance numbers to be obtained.

‘False claims were made for a wide range of benefits, in particular tax credits, income support, child benefits and housing benefit.

‘In my view this was a professionally planned fraud.

‘I regard it as a serious matter that the UK benefit system was targeted abroad in a sophisticated way.

‘Some of you were resident in the UK at the time of these offences, some of you actually made claims while resident in Romania, and flew into and out of the UK to collect your benefits.’

The judge said most of the defendants were related, and that they were connected to the town of Tandarei in Romania, adding that large sums of money had been traced through bank accounts in that country.

He also praised the co-operation of the law enforcement authorities in Romania in helping to bring the defendants to justice.

Turning again to the fact that some of the defendants had not lived in Britain at the time of the scam, he said they had shown a ‘flagrant and persistent approach to offending.’

Lemsatef, of (78) Kensington, Liverpool, admitted two counts of supplying articles for use in fraud

The charges dated from between March 2003 and December 2009.

Prosecutor Christopher Hehir told the court that Claudia Radu was stopped at Stansted airport on November 2, 2008, alongside her husband, who was not before the court today.

The couple were in possession of 13,000 Euros and £1,800 in cash, as well as Post Office receipts detailing how they had paid in their benefits cheques.

A currency exchange receipt indicated that during their visit they had changed 10,000 Euros.

Judge Stone said: ‘These fact, in my judgement, show a flagrant and persistent approach to offending, and are an aggravating feature of your case.’

The court heard that her brother-in-law Adrian Radu, had received £29,000 in benefits ‘while still living in Romania’.

Her father Stoica claimed benefits totalling £13,000. He had shown UK officials false birth certificates and ‘vignettes’ of children he claimed were his, but whose births had never been registered.

Ramona Dumitru, who illegally received £81,000 in benefits, claimed she had six children, aged between two and 13 years old.

The court heard that these children have been taken into care by the authorities amid suspicions that they are not really her children, but have been subject to child trafficking. 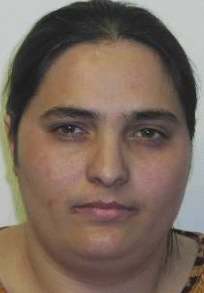 ALLEYNE:TEEN KNIFED THREE TIMES BECAUSE HE CAME FROM ‘WRONG’ AREA OMONI:BAN FOR NURSE WHO SENT HIS COLLEAGUES PORNOGRAPHIC EMAILS