Danby, Hall and O’Toole: ANY EXCUSE TO KILL

Psychopathic monster James Danby was desperate to satisfy his urge to carry out a gruesome killing.

He found his excuse when a teenage girl falsely accused his slightly built neighbour Luke Harwood of rape.

Danby, 27, seized on the bogus claim and used it to justify inflicting extraordinary brutality.

He beat and kicked Luke, 18, before taking him to a field where he and Tony O’Toole jumped on his head until it popped like a marshmallow.

Danby then dumped the body in a stream and spent the following day bragging about how the young father’s brains had spurted all over his jeans.

He even boasted the killing had promoted him to the ‘A-Team’ of crime and planned to slice off Luke’s fingers and pull out his teeth to prevent his body being identified.

But he was arrested on the journey to the body with a pair of pliers and three kitchen knives after Luke’s housemate, babyfaced Emma Hall called the police.

She had egged the others on as they set about their victim but decided she could stand the violence no longer.

Police believe Danby, who had never had a job and had racked up a string of low-level convictions, was looking for any excuse to kill.

One officer said: ‘There is only one word you can use to describe James Danby – psychopath.’

Luke, who was 5ft 7ins tall and weighed just seven stone, was one of a family of six children and had a son who was eight months old when his father died.

He had been living with his girlfriend and son but asked to be re-housed by the council when they began quarrelling.

On the night he died he moved to the room at the council bungalow in Crow Lane, Romford, Essex, where Danby and the others lived.

The house had been divided into seven bedsit rooms with five on the ground floor and two more in the loft.

Behind the house were two more buildings not controlled by the council.

By chance an 18 year-old girl visiting the house that evening saw Luke and claimed he had bestially raped her two years before.

Her complaint had been dropped after she was interviewed by police, who found her accusation was untrue.

But when the girl repeated her claims, Hall vowed: ‘I’m going to f***ing kill him.’

Luke was so skinny that he wore jogging bottoms under his jeans, and on the day he died was wearing pyjamas as well.

Danby took a photograph of his on his mobile and showed it to the girl to confirm it was the man she claimed had raped her before he launched his ferocious two hour assault.

Luke was repeatedly punched in the face in his bedroom and in a shower room, spraying blood over the walls and floor.

The girl told the court: ‘His nose was bent and there was blood everywhere. It was awful.’

He was so badly beaten that Hall said he looked like ‘The Elephant Man’ as he was bundled into her blue Fiat Punto.

Luke was repeatedly elbowed in the face by sadistic Danby on a journey to playing fields in Broadmead Road, Woodford Green.

Hall was driving and O’Toole was also in the car as Danby held a knife to the teenager’s neck and said he was going to ‘slit his throat.’

Luke was ‘finished off’ on the bank of the stream with repeated stamps and kicks.

‘His murder was quite extraordinarily callous and violent and brutal,’ said prosecutor Simon Denison.

‘His facial skeleton was crushed.

‘They then concealed his body by covering it with a mattress and other items.’

According to O’Toole, Danby suddenly tried to strangle Luke by putting him in a ‘sleeper hold’ before repeatedly stamping on his head.

O’Toole said he was so shocked by the attack he vomited near a fence.

‘It’s something a monster would do,’ he said.
‘I KILLED HIM, TREACLE’

When Danby returned to the car he had blood spattered all over his jeans, top and hands and confessed to Hall: ‘I killed him, treacle.’

Hall told jurors: ‘He said he stamped on Luke’s head 20 times until it popped.

‘He said it went like a marshmallow and brains spurted everywhere and that he had pumpkin on his jeans.’

They went back to Crow Lane and Hall then drove Danby, O’Toole and another housemate, Billy Duggan, to Hou Hatch in South Weald, Essex where Luke’s belongings and Danby’s clothes were doused with petrol and burnt.

The following day when Hall announced she had killed a spider with her shoe, Danby replied: ‘Oi, you f***ing murderer, you’re just like me.’

And when O’Toole complained he had hurt his foot playing football, Danby said: ‘My f***ing foot is hurt after stamping on that c***’s head.’

Danby then insisted on Hall, O’Toole and Duggan going back to see the body.

At the scene Danby pointed out a large patch of blood and laughed: ‘That’s where I stamped on that c***’s head.’

Danby rolled the body into the stream and put the mattress on top of it.

Back at the house the group mopped and scoured Luke’s bloodstains from the house as attempts were made to ‘remove all trace of him.’
A BETRAYAL

But Hall tipped off the police on the evening of May 28 after Danby announced he was going to return to the body for a second time to remove the hands and teeth.

‘He was laughing and joking about cutting Luke’s head off,’ Duggan recalled.

Hall said she had been so sickened by the violence and Danby’s horrific boasts she had to shop him.

Hall called police from a phone box and said she wanted to ‘report a dead body.’

She gave the location of the stream and said she would be there in twenty minutes. 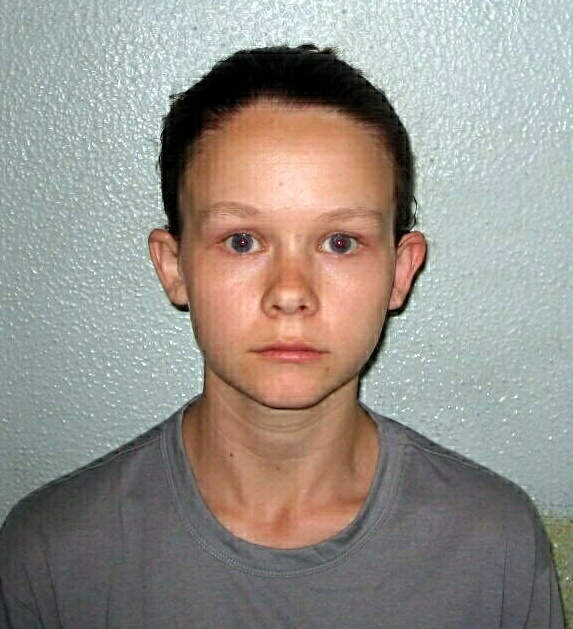 Officers lay in wait at the scene and arrested the group as they returned with the knives and a pair of wire cutters.

The killers tried to blame each other, with O’Toole claiming Danby was a ‘monster’ who had destroyed all their lives.

But he, Danby and Hall were all convicted of murder.

The horrific death so incensed friends and family that a team of police officers from the Territorial Support Group was brought into the Old Bailey to keep them apart from supporters of the killers during the three-month trial.

Danby refused to leave his cell for the sentencing hearing, where he was jailed for life with a minimum term of 25 years.

Judge Paul Worsley said: ‘James Danby is a controlling, manipulative and dangerous individual who manipulated others in the dock to support him in these dreadful events.

‘He has shown no sign of remorse but only contempt for these proceedings.’

Hall received a life sentence with a 15-year minimum term, while O’Toole was jailed for at least 17 years.

Duggan, 21, who was convicted of perverting the course of justice for helping with the clean-up operation, was handed a suspended sentence.