Killer was wrongly released from a life sentence

David McCorkell, 54, murdered 61-year-old Diane Dyer at her ground floor flat in Oakwood Avenue, Beckenham, south London, on 18 July this year after he was let out on licence.

He had recently tested positive in four drug tests and probation officers were considering having him recalled to prison because he could not control his temper.

McCorkell was given a life sentence in 2002 after he beat a woman about the head in the grounds of a hospital to get money to fund his heroin habit.

After 13 years he was released after parole board staff deemed him ‘not a danger’, but this was clearly ‘very badly wrong’, the Old Bailey heard.

House-proud Mrs Dyer was found unresponsive by police when they arrived at the ground-floor flat at 11pm in July this year after neighbours became concerned about her.

She had known her killer for three months after a chance meeting while she was walking her dog. 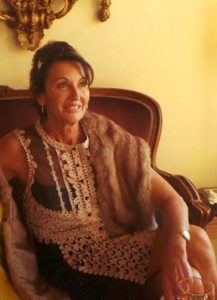 McCorkell had just been released from a 27-month burglary sentence imposed in 2017.He has convictions for assault occasioning actual bodily harm, possession of an offensive weapon, affray, possession of a firearm with intent to commit an indictable offence dating back to the 1980s.

He was described as an ‘appalling criminal’ by The Common Serjeant of London, Judge Richard Marks QC.

Jailing him for a minimum of 21 and a half years, Judge Marks, said: ‘This was a savage, vicious and brutal killing.

‘You have an appalling criminal record. You have 22 convictions for 44 offences.’

Referring to his release from the life sentence the judge: ‘The probation service said you were no longer a danger. Clearly they got this very badly wrong.’

Mrs Dyer, described as extremely vulnerable by family members, had been married for 41 years with two children before she met McCorkell.

Neighbours described her as a private woman always willing to help those who needed it.

After meeting Mrs Dyer this year, McCorkell he started visiting her every day and her friends became concerned when she began to lose weight and complain of being ill-treated.

Living on her own, Mrs Dyer took comfort from the companionship of her rescue dog called Willow.

Alison Hunter, prosecuting, said: ‘Ms Dyer was discovered at around 11pm as a result of a call to the local ambulance service made by one of her neighbours who had become concerned by no response to attempts to contact her during the day.

‘Paramedics noticed blood stains to the outside of the door and also noticed disarray in what would otherwise be Ms Dyer’s pristinely kept flat.

‘Ms Dyer was found lying on her back on one of three heavily blood-stained pillows.

‘Diane Dyer had sustained 71 injuries in total, there was also evidence of older bruising to her body.

‘Diane Dyer had quite literally been strangled and beaten to death.

‘Mr McCorkell was known to have visited her on a daily basis. She had become painfully thin in recent days and had been complaining of Mr McCorkell’s treatment of her in the recent days before her death.

Wearing a blue jumper and grey prison tracksuit McCorkell remained silent and emotionless as he was led to the cells.

McCorkell, of no fixed address, admitted murder and was jailed for life with a minimum of 21 and half years.