Max Clifford: The PR Guru With a Tiny Penis

Millionaire PR guru Max Clifford revelled in his reputation as the ‘King of Sleaze.’ Britain’s best-known celebrity agent made his fortune by lifting the lid on explosive scandals, including David Beckham allegedly bedding his personal assistant, Rebecca Loos, in 2004.

Clifford became the ‘go-to’ for gold diggers hoping to sell their stories and enjoy 15 minutes of fame.

He was also responsible for revealing Tory cabinet minister David Mellor’s affair with actress Antonia de Sancha – including claims of toe-sucking and romping in a Chelsea football shirt.

Acting as both poacher and game keeper, Clifford’s media savvy put scores of A-List clients on his books,  including X Factor mogul Simon Cowell and The Beatles.

But the kiss and tell merchant met his downfall after cynically exploiting his celebrity connections to lure teenage girls into bed.

He prided himself on mastering the dark art of keeping the sordid secrets of the rich and famous under wraps.

But the now convicted paedophile was powerless to prevent his own depraved desires from hitting the headlines during his Southwark Crown Court trial.

Clifford relied on a tried and tested technique to entice his young victims into the den of ‘sexual fiefdom’ behind the doors of his New Bond Street HQ, where he regularly romped naked.

The spin-king toyed with an aspiring model, dancer and even a Bond girl, offering ‘leg ups for leg overs’.

A ‘master of manipulation’, the 71-year-old shamelessly named-dropped stars including David Bowie – telling one victim she would have to sleep with the Ziggy Stardust singer to appear in his hit movie, Labyrinth.

The PR expert – who invented the infamous ‘Freddie Starr ate my hamster’ front page headline – then used his ‘penis patter’ in a ‘pathetic’ attempt to persuade women to touch him.

He bizarrely bragged about his tiny manhood, leaving his victims stunned after asking them ‘is this the smallest they had ever seen’ and telling one: ‘If you touch it, it gets bigger’.

The pervert tried to play the sympathy card, exposing himself before saying: ‘Isn’t it tiny, it’s useless, how can I satisfy anyone with this?’

A number of witnesses revealed how he was less than well-endowed, with one describing him as ‘freakishly small’, while another insisted it was a mere two-and-a-half inches in length.

Twice-married Clifford silently squirmed in the dock during the humiliating evidence, which prompted sniggers in the public gallery.

And jurors were unable to contain their laughter after one leggy model described the pensioner as being ‘huge’ – but announced she had a very small mouth.

He pretended to have bedded Supremes star Diana Ross before ordering the girl to perform oral sex on him in his office.

The cringeworthy claims were apparently contradicted by phyisician Dr Ann Coxon, who measured Clifford as five and a half inches flaccid.

But it was not enough to save the publicist from jail.

Four of the 11 charges related to Clifford’s youngest victim, who was just 15 when he molested her after promising to make her the next Jodie Foster.

He groomed her for sex after meeting her during a family holiday in Spain.

The PR wizard visited the girl at her home, shaking hands with her father before abusing her in his bright yellow Jaguar.

And Clifford insisted Oscar-winning actress Julie Christie had instructed him to take the victim’s virginity to make her ‘fall in love’ with him.

Some 35 years later, she wrote him an anonymous letter describing how he made her life ‘a living hell’ and revealing that she considered suicide as a result of her ordeal.

The anguished note said: ‘You took pleasure in degrading me. A+ for child grooming. How proud you must be.’

But the heartless publicist kept the note as a sick trophy in his bedside table and dismissed it in court as ‘the rantings of a mad woman’.

Clifford is believed to have used his disabled daughter, Louise, as bait to lure a 12-year-old victim into a jacuzzi during a Spanish holiday.

He boasted to her family about representing screen siren Diana Dors and madcap comedian Freddie Starr in a bid to gain their trust.

The pervert then asked the girl’s parents if she could play with his only child, who suffers from rheumatoid arthritis.

He slipped his hands into her bikini bottoms and forced her to pleasure him during a ‘tickling game’ while they were alone in the hot tub.

Giving evidence as a supporting prosecution witness, she described how she had endured ‘nightmares for 30 years’ after the attack in 1983.

Clifford’s barrister, Richard Horwell QC, described the case against him as ‘grubby voyeurism’ amounting to ‘fifth-rate fiction of a standard that not even Mills and Boon would countenance’.

And during a polished performance in the witness box, Cliford insisted he had no interest in ‘silly little girls’.

The self-confessed womaniser admitted to being ‘greedy’ and openly boasted of his rampant sexual appetite – including indulging in numerous affairs, two of which with his staff.

Clifford admitted the swinging 1960s and 70s was a ‘different time’ and that it was ‘normal’ to have affairs.

‘I had no interest or attraction to young girls, if I ever met them.

‘I wasn’t sexually frustrated, I was very happy with my sex life.

‘I didn’t need to impress young girls to achieve any kind of sexual satisfaction or interest or stimulation.

He slammed suggestions that he had a penchant for underage girls as ‘revolting’ and ‘disgusting lies’. 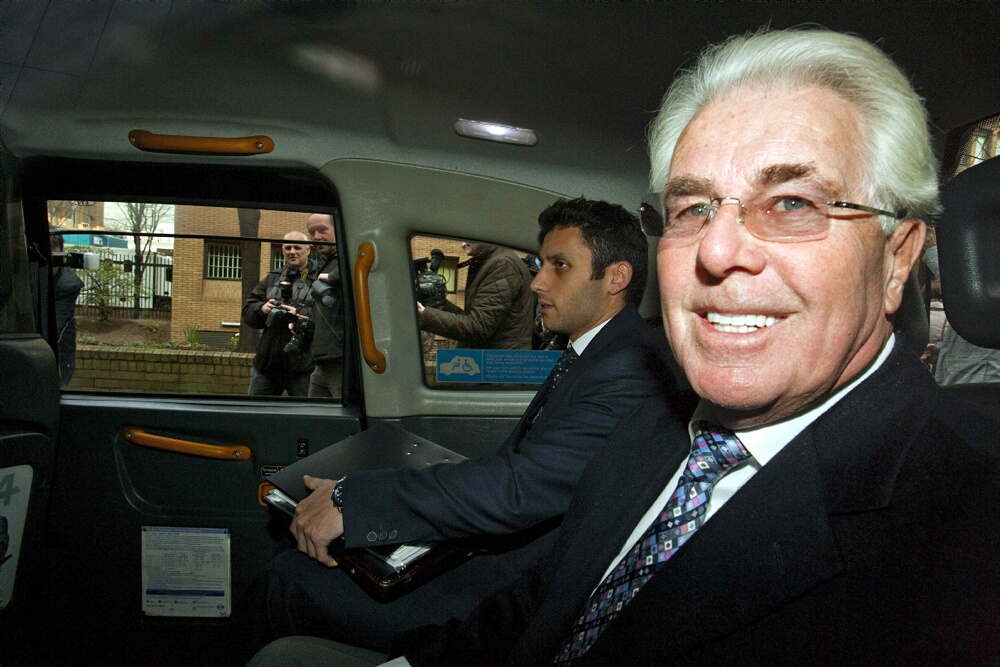 Grinning: Clifford before the verdict

And the celebrity agent also capitalised on his children’s charity work, never missing an opportunity to mention his good deeds for organisations in need.

He branded his accusers as ‘money-grabbing’ fantasists and bandwagon jumpers, rubbishing their claims as ‘nonsense’ which ‘didn’t happen’.

And he claimed the Operation Yewtree investigation was set up simply to spare the blushes of detectives who failed to catch Britain’s most prolific paedophile, Jimmy Savile.

But he failed to convince the jury or the judge, Anthony Leonard QC, who slammed Clifford for leading a double life.

DEFIANT TO THE END

Clifford remained defiant following his conviction for eight counts of indecent assault, which saw him become the first person to be found guilty as a result of the Yewtree probe.

He was cleared of two further counts of indecent assault and the jury failed to reach verdicts on a third count, which was left on the court file.

On the day of his sentence, the PR guru patiently posed for the paparazzi after taking his final walk of freedom to learn his fate.

He refused to apologise to his victims and even smiled as he sarcastically wished them ‘good morning’ while entering the glass-enclosed dock.

But the grin soon turned into a grimace after he was handed an eight year prison sentence.

Clifford apparent failure to take his trial seriously did not go unnoticed.

Judge Leonard could not disguise his disgust after learning the celebrity agent crept up behind Sky News reporter Tom Parmenter and mimicked his gestures during a broadcast not shown until the end of the trial.

Passing sentence, he condemned Clifford for ‘attempting to trivialise the proceedings of the court’, describing his behaviour as ‘quite extraordinary’.

The judge said: ‘These offences may have taken place a long time ago, when inappropriate and trivial sexual behaviour was more likely to be tolerated, but your offending was not trivial, but of a very serious nature.

‘The reason why they were not brought to light sooner was because of your own dominant character and your position in the world of entertainment which meant that your victims thought that you were untouchable, something that I think you too believed.

‘Although your charitable work has gone on for a long time after your offending stopped, I cannot ignore that for decades you were leading a double existence.’

Clifford has been swiftly divorced by his second wife, Jo Westwood, who was notably absent throughout his trial. 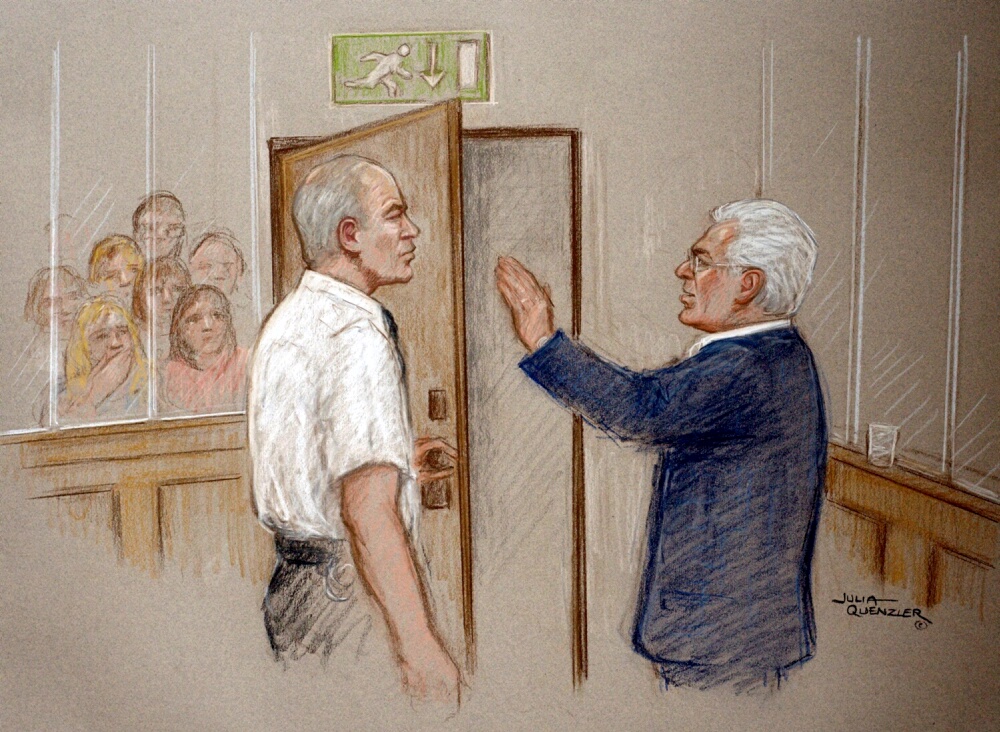 He ain’t so happy now: Clifford waves goodbye as he is led to the cells

He has also been shunned by his high profile clients and forced to close his PR firm, Max Clifford Associates, which crumbled after being founded 40 years ago.

Meanwhile the charities which relied on his support have sought to distance themselves from the disgraced PR guru.

His spectacular fall from grace was complete after he was reportedly on the verge of tears during a strip search at tough HMP Wandsworth.

According to convicted fraudster Gianni Di Stefano, Clifford arrived on his first day at the south London jail with a bagful of prison law books and ‘a serious attitude problem’.

Di Stefano, a bogus lawyer dubbed the Devil’s Advocate for representing  clients including Saddam Husssein, Harold Shipman and Ronnie Biggs,
was sent to Wandsworth after being locked up for 14 years at Southwark Crown Court.

He wrote in a letter to a friend leaked to the press:

‘He (Clifford) originally refused to be strip searched but was soon educated in the ‘Wanns’ way of doing things.

‘I felt sorry for him, because as I told him, the only spin he will originate or participate in will be when his room is searched.’

Clifford has now lodged an appeal against his sentence. 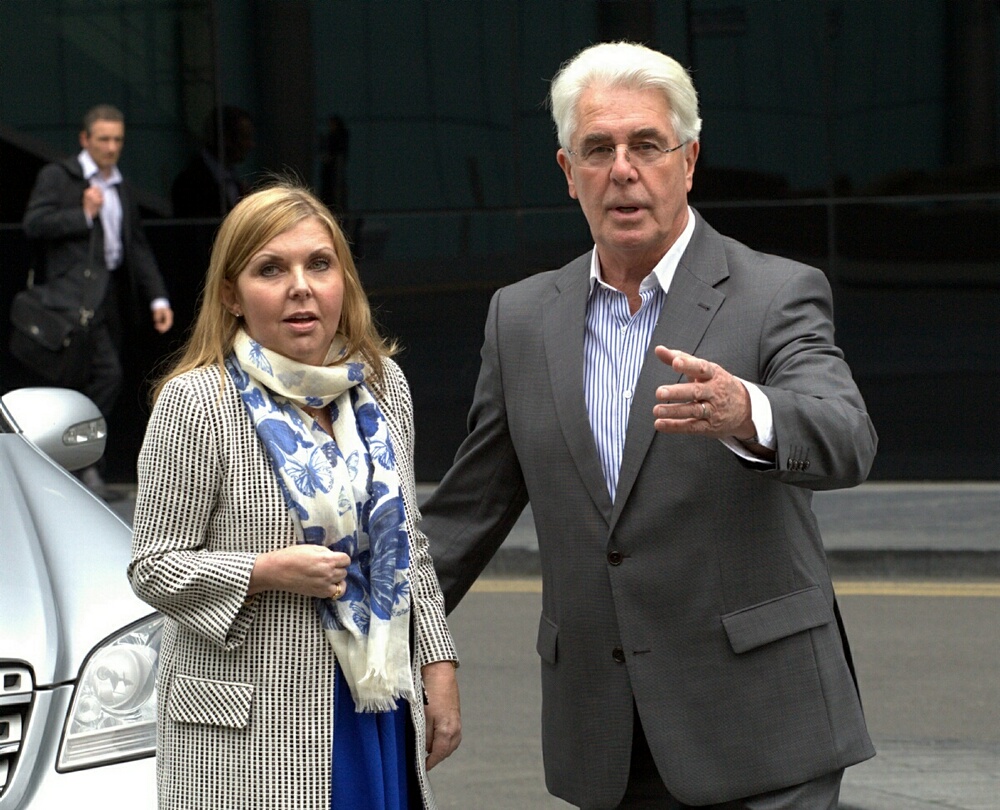 Clifford outside court with daughter Louise