Well. that’s one way to make a complaint…

A motorist who crashed his car into a police station before dousing the road outside in petrol and setting it alight was sentenced to an indefinite hospital order.

Pawlowski reversed the vehicle with a ‘furiously spinning’ rear wheel in the aftermath of the smash before jumping out and emptying a fuel canister at the entrance of the building.

The Pole poured the gasoline in a ‘zig-zag’ line across the road outside and set it ablaze.

Following his arrest Pawlowski said he had been planning the incident for around two-and-a-half years.

He chose the date and time because the numbers ‘1’ and ‘7’ – in the time were personally significant to him.

Bearded Pawlowski also held a grudge against police following previous incidents including one in which his car was stolen and never found after an investigation.

Pawlowski was sentended to an indefinite hospital order under the Mental Health Act by Judge Barbara Mensah.

Prosecutor Zahid Hussain told an earlier hearing that having crashed into Edmonton police station he remained inside his car attempting to reverse the vehicle.

‘The rear wheel was perceived to be furiously spinning and from the metal part of the wheel smoke was being emitted.

‘He then exits the vehicle, goes to the rear of the motor vehicle and retrieves a fuel canister.

‘He then ignites the fuel which is lit.’

Pawlowski, of Enfield, was apprehended by a member of the public as officers rushed to the scene. 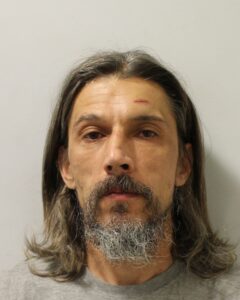 He was quickly arrested and officers extinguished the fire.

Fortunately no one in the street or in the front office was hurt, and there was no serious damage to the building.

The building was evacuated and the incident was assessed but was determined there were no links to terrorism.

Pawlowski told officers he ‘harboured a grudge’ against the police after they ignored his reports of a theft two years prior.

The prosecutor added: ‘This is filmed by a passing member of the public. The police [attended]. He was apprehended.

‘Upon arrest I quote his words: “I have been waiting two years for you and now I’ve got you. Those are the words attributed to him.

‘He was formally interviewed by police at the station.’

Pawlowski said upon arrest that he wanted the inident to be broadcast on TV and held a grievance against the police because they ignored his reports of a theft.

Mr Hussain went on: ‘Having been assessed and deemed fit to be interviewed, he told police in interview it was not his intention to kill anyone, however he harboured a grudge against the police because he reported a theft more than two years ago and the police ignored the allegation he had made and he would no longer be ignored.

‘The defendant when being assessed by the mental health practitioner at the station, stated that he wanted his actions to be broadcast on television and was asking questions as to whether it was being reported in the news and that he wanted publicity.

‘He was subsequently charged in relation to these matters, appears in custody today and of course these matters are now destined for the crown court.’

When he appeared at Highbury Corner Magistrates’ Court last year Pawlowski shouted from the dock: ‘It’s f***ing fake. Everything is fake.

He added later: ‘Do you know why I’ve done this?’

Chief Superintendent Simon Crick, head of policing for Haringey and Enfield, said: ‘When shown parts of the footage during police interview Pawlowski laughed, but the actions he took that day could have had devastating consequences.

‘The officers who responded were confronted with a chaotic and frightening scenario but acted with the utmost courage and bravery to swiftly detain Pawlowski.

‘Following the incident support was provided to the staff who man our front counter, who were going about their work when this distressing ordeal unfolded. Very luckily, no one was injured.

‘The member of the public who helped apprehend Pawlowski left the scene was never traced, despite extensive efforts. I’d like to extend our thanks to them for their bravery in assisting my officers.’