Gary Glitter: The Pervert in Sequins

At the height of his fame, posters of the bewigged, spangly-suited ‘Leader’ were plastered across the bedroom walls of his loyal followers.

Strutting across the stage in outrageous silver platform boots ‘bigger than Elvis’ Glitter enticed his adoring fans with the words ‘Do you wanna be in my gang?’

He threw parties attended by fellow Glam Rocker Alvin Stardust at his palatial West Sussex mansion that boasted a swimming pool, ponies and a ‘sweet room’ packed with confectionery.

He smoked French cigarettes to copy David Bowie, popped bottles of Moet backstage and played to screaming admirers on Top of the Pops.

But Glitter, real name Paul Gadd, was unmasked as a monster when a technician at PC World in Bristol found thousands of sickening child abuse images amassed on his laptop in 1997.

Between shows the teen idol had used his credit card to buy 4,000 revolting snaps of little girls and boys as young as two years old from two Japanese websites.

Moments before he pleaded guilty to 54 charges of downloading indecent images of children he was acquitted – to cheers from the public gallery at Bristol Crown Court – of  eight counts of sexually assaulting a teen fan almost two decades before.

He served two months of a four month sentence in Bristol prison before fleeing  the country.

But it would be another 16 years before the convicted paedophile was locked up again on UK soil for a string of horrific crimes against children dating back to his heyday in the 1970s and 1980s.

In the meantime Glitter would go on to gain international notoriety as a fallen star with a dangerous taste for children.

The chart-topper boasted he won a huge female fanbase with his hit single ‘Do You Wanna Touch’ spawning ‘Glittermania’.

‘I couldn’t go anywhere, I mean literally I couldn’t walk down the street, I couldn’t do anything – I was so recognisable for some reason – it was just unbelievable.’

He bragged his flat in Kensington would be surrounded by ‘400 kids’ begging him for memorabilia, his jewellery and even the clothes off his back.

One besotted Glitter fan was just 12 years old when she went to see ‘national treasure’ Glitter.

The ‘ecstatic’ child was introduced to the heartthrob backstage by her music-loving mum at Baileys nightclub in Leicester in 1977. 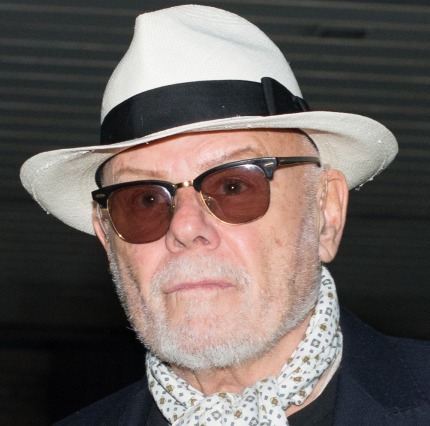 Glitter signed their sparkly C&A gold jackets and plied them with Moet champagne before luring the schoolgirl back to his suite at the Holiday Inn.

Back in the hotel suite egomaniac Glitter regaled his guests with showbix tales and claimed dead comic Spike Milligan wanted to shoot him because he believed he had slept with his wife.

Weeping, the 50-year-old said: ‘I was feeling a bit worried about my mum now, people were talking all over each other and my mum, she was getting loud and she’s not like that – she doesn’t drink and I remember looking at her and thinking she’s not right,’ she said.

She saw her mum led away to ‘lay down’ by top songwriter and producer Mike Leander, who has since passed away.

Now alone, Glitter scooped up the champagne and glasses in one hand and took the young girl by the other and led her to a bedroom before kissing her.

She sobbed: ‘He had his tongue in my mouth and I couldn’t breathe so I put my hands on his head to push his head back.

‘He said never, never touch his hair, nobody’s allowed to touch his hair – he said he had a phobia about people touching his hair.’

The bewigged rocker then pulled her t-shirt up and chastised her when she covered her chest.

He then had sex with her ‘throughout the night’.

Alone and scared, she complied for fear of letting her mother down.

‘I was just so confused because my mum’s gone so I didn’t know what she wanted me to do,’ the woman said.

‘She really loved this guy so I am thinking I can’t upset her and I was trying to be really grown-up because I have been there drinking and smoking.

The next day her mum appeared to collect her.

‘He grabbed my head, pulled me over to him, gave me a kiss and said “you are a really clever girl, you got dressed before your mum came,’ she said through tears.

Tragically she believed she was his girlfriend and told her brother she was ‘going out’ with the star.

Later, when a family friend visited the girl’s bedroom – still plastered with Glitter’s image – she would discover crispy red roses from the musician and a note reading ‘Love Gary’.

A second adoring fan was just 13 years old when Glitter thrust his hand up her skirt and made her promise it was their ‘secret’.

She had been to see her ‘idol’ Glitter backstage as a ‘surprise’ at Baileys nightclub in Watford – which boasted a revolving stage.

Dressed in a silver-sequin jumpsuit unzipped to reveal his dark hairy chest and his trademark platforms, the pop pervert coaxed his young admirer onto his lap before sticking his tongue in her mouth.

She sobbed as she told jurors he slid his up her skirt during the 10-minute assault and asked her if she liked it. 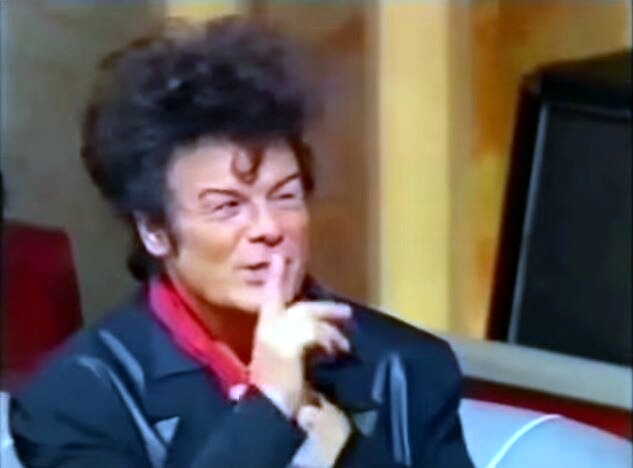 Now 48, the woman was convinced no one would believe her because Glitter was ‘so famous’.

But perhaps the most vicious assault was five years earlier when Glitter, reeking of booze and fags, crept into bed with an eight-year-old girl and tried to rape her.

The schoolgirl, who had ‘hippie’ parents, was driven around in Glitter’s Rolls Royce and was bowled over by his ‘magical’ mansion where the star threw lavish parties.

But after one party, in 1975, the teen idol crept into bed between her and her friend and tried to force himself on her.

‘I didn’t want to be rude – I still thought he was probably only trying to cuddle me and I shouldn’t stop that,’ she sobbed.

The witness, who gave evidence from behind screens, broke down in tears as she told jurors the chart-topper tried to rape her.

HE COULDN’T GET TO ME

‘I just fell over to the edge between the mattress and the blankets and he couldn’t get to me anymore,’ she said.

‘He was down at the end of the bed. He was on his knees… he was just rocking… he was groaning.’

In pain, she fled to the bathroom, locked the door and scrubbed herself clean.

The next day Glitter was ‘normal’ and gave her chocolate.

Clutching at hairs, Glitter protested he simply was not available to abuse fans after his shows as he spent 90 minutes cleaning and styling his wig after each performance.

The rocker insisted he would lock himself away backstage before embarking on his wig-maintenance routine that required sticky tape and dry cleaning agent carbon tetrachloride.

Baldy Glitter started losing his hair when he was just 18 and said his hairpiece, one of the defining features of his Glam rock image, was a ‘closely guarded secret’ and a ‘chore’ to care for.

‘In those days rock n roll singers had to have hair – it was a wig,’ he revealed.

‘It had double sides tape that when attached it will stick hard – the only problem is that when you sweat a lot, you perspire during a performance.

‘I could never be sure that it wouldn’t be absolutely tight the next day so at night, after the performance, I would spend an hour or more than an hour  taking care of it.’

The Glam rocker suffered a spectacular fall from grace in 1997 after dropping his Toshiba laptop off for repair at the Cribbs Causeway branch of PC World in Bristol.

Glitter, who was a paid-up subscriber to two Japanese websites that supplied depraved snaps, had a library of 4000 hardcore images of little girls and boys, some as young as two years old on his computer.

Giving evidence at his latest trial the convicted paedophile blamed the sickening stash of photos on a downward spiral into amphetamine addiction and alcohol abuse.

Choking back crocodile tears, he insisted he had been pining for Cuban lover Yudenia Sosa Martinez at the time and even begged to ‘stop all this internet pornography of children’.

Father-of-two Glitter fled to Spain and then Cuba where Ms Martinez fell pregnant but was forced to leave the country after a crackdown on sex tourists before third child Gary Jnr was born.

He resurfaced in Cambodia and took up residence in a palatial property in the Kandal Province on the outskirts of Phnom Penh.

But he was kicked out of the country following further sex crime allegations in 2002.

Controversy followed the former hit-maker and years later he would find himself at the centre of more vile child sex allegations.

Glitter hired prostitutes to entertain him at his rented villa in the seaside town of Vung Tau City.

It was in his home he also paid measly sums to two young girls, aged just 10 and 11, to indulge his obscene tastes.

One girl was introduced to the pervert by her aunt, the other had dropped out of school and run away from home a year before she fell into Glitter’s clutches.

In 2006 Glitter was jailed for just three years for lewd acts with children after subjecting the youngsters to horrific abuse.

He had faced seven years inside but stumped up $2000 to both the victims’ families in ‘compensation’ and was granted a lighter sentence.

Glitter protested his innocence and insisted he was the victim of a witch hunt.

He was released from Thu Duc prison in the southern Binh Thuan Province on 19 August 2008 and was dumped on a flight to London via Bangok.

Claiming health problems, he refused to re-board the flight in Bangkok and attempted to flee to Hong Kong after Thai authorities refused to admit him.

But he was also turned away at the Hong Kong border. 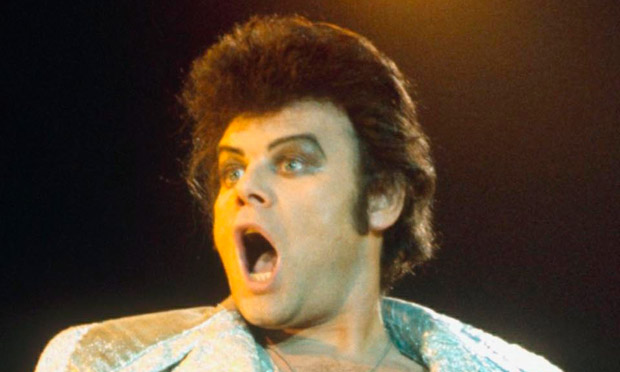 Happier times…Glitter at his height

Trapped, with at least 19 countries refusing him entry, Glitter was forced to return to the UK in August 2008.

In September 2009 Glitter applied to the courts to travel to Spain and France for a two-week villa holiday but was refused and he was issued with a six-month travel ban.

In March 2010 a ban to prevent the shamed star leaving the country was renewed ‘for the purposes of protecting children’ after Glitter refused the recommended rehabilitation treatment.

The following year unrepentant Glitter sought professional help for his ‘sexual attitudes and behaviour’ and won the right to travel.

By 2012 Glitter was back in the public glare after publicity surrounding Operation Yewtree -the probe arising from the Jimmy Savile scandal – prompted two women to accuse him of abusing them in the 1970s and 1980s.

But Judge Alistair McCreath commented: ‘Whatever changes may have been effected in you by this treatment, they did not include any admission at all on your part of the wrong that you had done, in particular of the offences of which you now stand convicted.’

The notorious paedophile was finally jailed for 16 years on 27 February this year following trial at Southwark Crown Court.