‘You will never be released’ – death behind bars for MP killer

The neo-Nazi murderer of Jo Cox will die behind bars after he was handed a full life sentence for shooting and stabbing the MP a week before the EU referendum.

Loner Thomas Mair, 53, screamed ‘Britain First’ as he shot the mother-of-two in the head before repeatedly stabbing her with a commando dagger.

His courageous victim, 41, cried out to her two aides: ‘Let him hurt me, don’t let him hurt you,’ before Nazi sympathiser Mair returned to finish her off.

The white supremacist shot her once in the head and once in the chest with the sawn off .22 hunting rifle loaded with expanding dum-dum bullets designed to cause maximum damage.

He stabbed her again with the WWII-style combat dagger as she lay bleeding on the road.

Kilmarnock-born Mair also plunged the knife almost to the hilt into the stomach of hero pensioner Bernard Kenny, 78, as he tried to save the Labour MP for Batley and Spen.

Paramedics arrived in minutes and battled to save Mrs Cox, but she was pronounced dead at 1.38pm, leaving behind her husband, Brendan, and two young children.

Mair proudly told police ‘It’s me’ before he was rugby-tackled to the ground, then declared: ‘I’m a political activist,’ after his arrest.

At his 1970s council house, police found an extensive collection of Nazi memorabilia, including a golden statue of a Third Reich Eagle emblazoned with a swastika.

At his first appearance in court, Mair exclaimed: ‘Death to traitors. Freedom for Britain,’.

But he refused to enter pleas and remained silent in the face of overwhelming evidence at his Old Bailey trial.

He asked to address the court through his barrister, Simon Russell Flint, QC, but Mr Justice Wilkie refused to allow Mair to speak before telling him he would spend the rest of his life in jail for the murder of Mrs Cox.

‘The fundamental importance to our democracy for Members of Parliament to be able to
perform their duties and meet their constituents safely and fearlessly is reflected in the fact that no respectable political party contested the by-election caused by her death,’ the judge said.

‘In the true meaning of the word she was a patriot.

‘You affect to be a patriot. The words you uttered repeatedly when you killed her give lip service to that concept.

‘Those sentiments can be legitimate and can have resonance but in your mouth, allied to your actions, they are tainted and made toxic.

‘It is clear from your internet and other researches that your inspiration is not love of country or your fellow citizens, it is an admiration for Nazism, and similar anti democratic white supremacist creeds where democracy and political persuasion are supplanted by violence towards and intimidation of opponents and those who, in whatever ways, are thought to be different and, for that reason, open to persecution.

‘Our parents’ generation made huge sacrifices to defeat those ideas and values in the Second World War.

‘What you did, and your admiration for those views which informed your crime,
betrays the sacrifices of that generation.

‘You are no patriot. By your actions you have betrayed the quintessence of our country, its adherence to parliamentary democracy.’ 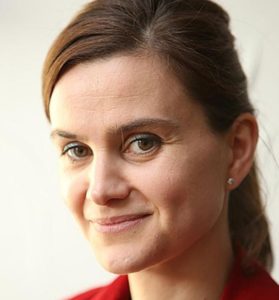 and Jean Leadbeater, sister Kim and her husband Brendan sat in court as Mair was sentenced.

He said: ‘For the person who did this, we have nothing but pity that his life was so devoid of love and consumed with hatred that this became his      desperate and cowardly attempt to find meaning.

‘The killing of Jo was a political act, an act of terrorism – but in the history of such acts it was perhaps the most incompetent and self-defeating.

‘An act driven by hatred which instead has created an outpouring of love.

‘An act designed to drive communities apart which has instead pulled them together.

‘An act designed to silence a voice which instead has allowed millions of others to hear it.’

Mair was described by neighbours as a shy and quiet loner who enjoyed gardening and was often seen coming and going from his house carrying shopping bags.

But inside the house he had shared with his grandmother, Helen, until her death in 1996, Mair had accumulated a library of hate.

His bookcase, adorned with a Nazi statue, was filled with books on German military history, while publications with names such as ‘March of the Titans: A history of the White Race’ and ‘The Politics of the Holocaust’ were stashed away in drawers.

He had also compiled a dossier on Mrs Cox, including an article in which she stated: ‘I believe the patriotic choice is to vote for ‘Britain to remain inside the EU.’

Mair used public computers at his local libraries to carry out his warped research, trawling the internet for extreme right wing material, gathering information on Mrs Cox and watching YouTube videos featuring the gun he planned to use. 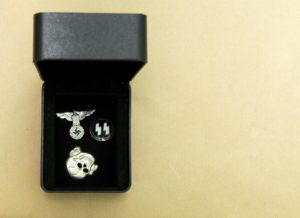 Mair was a keen collector of Nazi tat

On 15 June, he accessed Wikepedia pages for ‘Lying in state’, ‘Coffins’ and ‘Paupers funeral’ in Birstall library, where a poster advertised Mrs Cox’s surgery the following day.

She was driven to Market Street by PA Fazila Aswat along with caseworker Sandra Major after visiting a care home and a school.

They were due to hold a pro-EU stall in the market later that afternoon and were on their way to the consistency surgery at at Birstall library when the first shot rang out.

Ms Aswat said: ‘In that instant our lives changed forever. The next thing I saw was Jo was on the floor and there was a man standing over her with a knife and that was when I knew something was completely wrong.’

The pair tried to fight Mair off with their handbags as he attacked before dragging her into the road.

‘He started to walk away, and then when Jo shouted out, he came back.

‘He shot her twice more and started stabbing her again.

‘She was on the floor. She didn’t get up again.’

The attack was caught on CCTV and some 16 eye witnesses travelled to London to give evidence for the prosecution against Mair.

Many told how the Mair screamed: ‘Britain First, ‘this is for Britain’, ‘keep Britain independent’ or ‘British independence’ before calmly walking away from the scene.

David Honeybell, who had gone to the library to speak to his MP, said: ‘It was as if he hadn’t a care in the world.’

Bernard Kenny was too ill to attend court to give evidence, but told in a statement how he was knifed by Mair as he stepped in to ‘take him down’.

‘I was planning to jump on his shoulders, he had his back to me, waving a knife about,’ he said.

But he was spotted by Mair, who plunged the knife into his stomach almost to the hilt.

‘I put my hand over my stomach on the wound. I saw the blood and thought, “oh my God”,’ he added. 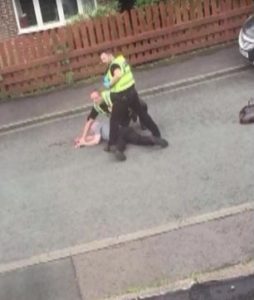 Leaning out of the window, PC Wright ordered Mair to drop the bag.

Giving evidence, his colleague said: ‘At that point, he put his arms up by his waist and he just said: “It’s me”.’

The officers charged at Mair and rugby tackled him to the ground, splitting his head open on the concrete.

After he was handcuffed, Mair told them: ‘I’m a political activist.’

Among Mair’s possessions were the modified rifle, the replica commando dagger, a bag of .22 bullets and a blood-stained leaflet on the EU referendum.

Mair stayed silent throughout three police interviews, but proclaimed: ‘Death to traitors. Freedom for Britain,’ when he appeared before magistrates two days later.

Prosecutor Richard Whittam, QC, said: ‘The sheer brutality of her murder and the utter cowardice of her murderer bring the extremities of humanity face to face.’

In a remarkably short defence speech Mair’s barrister, Simon Russell Flint QC could only ask jurors: ‘It is you and you alone who will determine if Thomas Mair will be allowed to return to his quiet and solitary existence in Lowood Lane in Birstall, or whether he will forever be remembered as the man who assassinated Jo Cox a week before the referendum to decide if Britain would remain a part of the EU.’

Jo Cox was elected to parliament on 7 May 2015 with a majority of 6,057 – the highest majority that seat had known – and she divided her time between her constituency and the houseboat she shared with her family on the Thames.

A proud Yorkshirewoman, in her maiden speech to Parliament she spoke of her joy at representing a diverse community.

Her colleague and friend, Stephen Kinnock MP, recalled how she said: ‘We are far more united and have far more in common with each other than the things that divide us.’