A double killer kept the bodies of his two murder victims in a freezer after abusing women for years.

Zahid Younis, 35, battered Henriett Szucs, 34, to death in 2016 and then stored the body of Mihrican Mustafa, 38, in the same freezer two years later when he strangled her.

When police caught up with Younis they found the bodies had been frozen for so long they had become fused together.

Manipulative and controlling Younis has a history of abusing women and was jailed for getting a child bride pride pregnant when she was 14 after marrying her in a mosque.

Police saw him at the one bedroomed flat he rented in Canning Town as a registered sex offender in 2016, not knowing the body of Ms Szucs was entombed in ice yards away.

The flat was in a a mess they left without interviewing Younis after he told the officers he was using a bucket as a makeshift toilet.

Hungarian sex worker Ms Szucs disappeared after moving in with Younis and was last seen alive with him in the summer of 2016.

Ms Mustafa had also been visiting Younis before she disappeared in May 2018.

Police only found their bodies when Younis fled the flat in Vandome Close and was reported missing in April last year.

They had to crowbar open the locked freezer, which had been hidden in the electricity meter cupboard and found the two bodies which were decomposing rapidly after the electricity was cut off.

Both victims had suffered appalling injuries including multiple broken ribs.

Ms Mustafa had suffered a fractured larynx and Ms Szucs’s skull had been fractured.

Younis tried to hijack his trial by firing his lawyer, demanding more time to review case documents and shouting abuse from the dock.

But the jury a Southwark Crown Court jury convicted him of two counts of murder after deliberating for 16 hours. 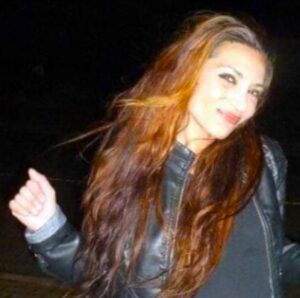 Mihrican was known by her family as ‘Jan’

Younis, who has flower tattoos on both sides of his neck, had abused girlfriends for many years and left one partner with a broken arm in 2007.

He married a 13-year-old girl in a Walthamstow mosque when he was 20 and admitted unlawful sexual activity with a child the following year in 2005 when she fell pregnant.

Younis also admitted common assault after he put the teenager in a headlock to drag her out of a supermarket.

A year later they were married in an Islamic ceremony at a mosque in Walthamstow.

Younis was given 30 months for having sex with her in 2005 and in 2008 he was jailed for breaking the arm of another teenage lover in three places.

He was sentenced to nearly five years imprisonment after admitting two counts of wounding and one count of assault occasioning actual bodily harm against the 17-year-old.

Younis left her covered in bruises and isolated from her friends while threatening to set her family home on fire if she confided in anyone about the abuse.

Another girlfriend who went on to have his child was locked in an airing cupboard for hours by Younis.

He also imprisoned her in a telephone box when she tried to call her mother and threatened to throw her in front of a train.

Both of his murder victims were vulnerable women ‘living somewhat chaotic lives’ characterised by periods of homelessness and addiction to class A drugs.

Before she died neighbours had seen Ms Szucs at the flat with a badly bruised face and heard ‘disturbing noises’ coming from the flat.

She had been forced to convert to Islam by Younis but wrote to him begging forgiveness for doubting him saying: ‘I got disillusioned just because of some slaps to the face.’

Neighbours also saw Ms Mustafa with marks around her neck but Younis claimed she had been drinking too much and tried to kill him.

Bodycam material played to the court showed PC Omar Naeem shining a torch through Younis’ abandoned flat to find the locked freezer with a zimmer frame on top of it. 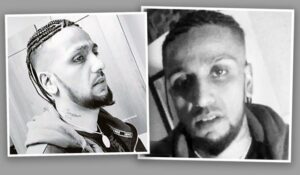 Younis had been abusing women for years

The officer could be heard saying: ‘Wait, there’s a foot there,’ to his colleague before bodies came into view.

Younis claimed Ms Szucs died mysteriously on his sofa and said two men, called Ted Jolley and Tommy Farmer, turned up outside his home with Ms Mustafa’s corpse stuffed in a wheelie bin.

He said they told him to burn Ms Mustafa’s body and dispose of her clothes off Southend Pier.

Duncan Penny prosecuting, slammed the double killer for telling ‘fairy tales’ and told him: ‘You were responsible for those deaths and the stories about these two characters, with all these elaborations, is nothing more than that. It is a story. It is a yarn. It is a tall tale.’

Mr Penny told jurors: ‘The sad truth in this appalling case is that just like those who survived and who spoke of their experience at the hands of Younis, Henriett Szucs and Mihrican Mustafa were the victims of Zahid Younis.

‘They were murdered by him and their bodies were treated with the same disrespect and indignity by him.

‘He will not face up to what he has done because he has demonstrated in this process, and let’s face it, over the years, because he is capable only of thinking of himself and capable of going to any length to protect himself.’

Younis, who hobbled into court each day using crutches, denied but was convicted of two counts of murder.

Mel Mustafa, who attended every day of her sister’s killer trial along with other relatives, shouted ‘Thank God’ as the jury returned the guilty verdict.

Younis was given a life sentence and ordered to serve a minimum of 38 years.

He refused to come up from the cells to face sentence, as he had refused to go into the dock for several points in his trial.

Mrs Justice Cheema Grubb said that both of the victims had fallen into Younis’ orbit when they were in a ‘low ebb’ in their lives.

‘You are an arch deceiver,’ she said.

‘You spent a lifetime destroying lives. You have preyed upon the vulnerable with superficial charm.

‘You are a heartless man and a narcissist.

‘Your concern throughout has been for yourself.

Icah Peart, defending, told the judge: ‘My lady will see that the defendant himself is not in the dock.

‘I have been downstairs to speak to him and try to persuade him to return to court.

‘He feels unable to do so.’

Mr Peart said the deaths were not premeditated but likely caused in a ‘fit of temper’.

Ms Szucs family who ‘very much’ wanted to attend the trial, had been unable to travel from Hungary due to the pandemic. 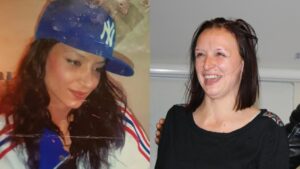 Henriett Szucs was a ‘beautiful and kind’

A statement from her mother said: ‘Henriett was a beautiful, kind young woman and no one deserves to be killed in such brutal circumstances’

In a moving victim impact statement, Mel Mustafa said her sister’s death had ‘shattered the lives’ of her family.

‘From the moment we found out she was missing we had spent every moment of every hour looking for her and we never for a moment gave up,’ she said.

‘Deep down I knew something wasn’t right because you would never leave your children.’

Ms Mustafa continued that when their mother found out about her daughter’s death, she spent two months in hospital and ‘nearly died of a broken heart’.