Crane driver who flushed his wife’s head down the toilet

A jealous husband who cut off his cheating wife’s head and flushed it down the toilet is set to die behind bars after he was jailed for 21 years.

Crane driver Dempsey Nibbs, 69, was enraged when Judith Nibbs, 60, his partner of 30 years, told him she had been seeing other men.

After she boasted of having sex eight times he battered her over the head with an iron bar for ruining his plans to retire by the sea.

He decapitated her because her eyes were still open after she died and he could not stand the sight of her staring back at him, the Old Bailey heard.

When he realised the head was took big to flush away, he broke his wife’s skull with a hammer, but succeeded only in blocking the lavatory pan.

Nibbs called the police and tried to kill himself with the knife and a shotgun as police arrived at the flat in Shoreditch, east London.

He admitted killing his wife between 10 and 11 April 2014 but claimed he was acting in self defence even though he had struck the first blow.

‘I am sure you had resolved to kill Judith before your son left for work on the evening of Thursday 10 April 2014 so you would not be thwarted be the sale of your house, to punish her for things that she had done and, I am afraid, to exact your revenge for how she had disrupted your plans,’ the judge told him.

‘You attacked Judith in the living room with an iron bar. You said in evidence you tapped her once on the head with it lightly to get her attention.

‘On the contrary, I am sure you launched a sustained attack on her head and face with the bar intending to hill her.’

The judge continued: ‘Your immediate thought was to cut off her head as punishment for what you described as her treachery.

‘You left her breasts exposed in an attempt to humiliate her, even in death, and as an indication, in part at least of what she was being punished for.’

The sentence means Nibbs, who suffers from prostate cancer and bladder cancer, will die behind bars.

His barrister, Ian Henderson QC said: ‘The reality is, during the currency of the term of imprisonment either age or health are likely to mean Mr Nibbs dies in custody.’

Nibbs had worked for Balfour Beatty for many years and was regarded as a model employee at the company where news of the killing stunned his colleagues.

Although they had never married the couple had two children, a son Kirk and a daughter Lauren, who was autistic and later went to live in a care home.

Mrs Nibbs also had three daughters from a previous marriage.

Kirk Nibbs still lived with the couple at their flat in Shoreditch and Mrs Nibbs worked for Meals on Wheels where she was known for her bubbly, happy personality.

By early 2014, the couple’s relationship had soured and Nibbs was suspicious his common law wife was seeing someone else.

Nibbs had moved into the spare room and an ‘undercurrent of violence emerged’ as the relationship fell apart.

His partner told her sister he had grabbed her by the throat and threatened to kill her.

She went on a road trip across Europe with a neighbour in 2013 and stayed at his family home in Morocco, although the neighbour denied there was anything sexual between them.

His wife had told Nibbs she was visiting Europe with old schoolfriends and then refused to show him any photos of the trip.

Later that month, while Judith was visiting her sister in Preston, he asked their son Kirk to investigate her computer for evidence she was having an affair.

Skype chat logs revealed she had showed pictures of her breasts to a man named ‘Khalid’ during regular chats from November 2013 to 28 March 2014.

In one chat Khalid showed her his penis Mrs Nibbs replied that it was ‘impressive and beautiful’.

Then on 7 April 2014 she boasted about seeing other men and taunted him: ‘I have had sex eight times.’

Before she left work at the Hackney Council-run meal delivery service the following day, Mrs Nibbs said: ‘If I’m not in Friday, I might be dead.’

Three days Nibbs said he confronted his wife in the front room of their home.

He said a row started when she asked: ‘What do you want’ in what he described as ‘an aggressive manner.’

Nibbs said he had armed himself with a metal bar in case there was a struggle because his illness had left him too frail to defend himself.

‘When I confront her I wouldn’t let her get the better of me.’

Nibbs claimed he took a heavy metal bar with him ‘to get her attention, like a threat.’

Nibbs claimed that his wife then lunged for his stomach area and yanked on his colostomy bag.

He said he put the metal bar in her mouth to stop her screaming so they didn’t disturb the neighbours. 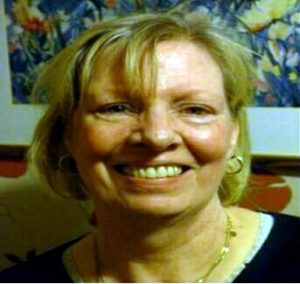 The tussle ended with them falling to the floor, the court heard.

Nibbs said: ‘She started to scream again so I had to put the bar in again to stop her screaming.

‘All of a sudden she just let go and I took the bar out of her mouth.

‘Her eyes rolled over in her head and she was dead.’

Nibbs said he shouted at his partner’s body calling her a ‘f**king traitor’ and a ‘f**ing snake’ for ruining his plans to retire to Hastings.

‘She led me to believe that everything was fine. She went back on her word.

‘I was going to cut her head off but I didn’t want to do it in the living room.

‘It was the mess. I suppose I didn’t want it to be messy.’

‘There was less clutter in the hallway and you could move freely,’ he explained.

‘That’s when I started to cut her head off. I used a knife. The knife was n the kitchen,’ said softly-spoken Nibbs.

‘To be honest with you, if the toilet was big enough it was in my mind to take the head and flush it down the toilet.

He said he got some rags, an old pair of trousers and a cushion and put it over the head.

‘I smashed it a number of times with the bar. But the bar didn’t have much effect,’ he said.

‘I went into the cupboard and got the lump hammer. I hit it once with the hammer and the head split open.’

Asked why he had put the cushion and rags over his wife’s head he said: ‘I didn’t want to make a noise.

‘I had people to the left and right and above me and I didn’t want to disturb them.

‘One shot with the hammer and her head just split open.’

He added: ‘I took the bits to the toilet. I flushed it down the toilet.

‘The toilet was blocked. All the bits and pieces came out the toilet.’

Nibbs said he scooped up the pieces, put them in a bag and placed them next to his wife’s body.

He said he intended to kill himself and got in a bath with a shotgun after calling the police.

But the gun misfired and he was stabbing himself in the chest when the police arrived.

Prosecutor Crispin Aylett, QC, said: ‘Quite why the defendant decapitated Judith and then disposed of her head is not entirely clear but it may well be that he did it out of pure hatred at the sight of his wife’s face.’

In a victim impact statement, Mrs Nibbs’ sister Frances Reeves said she would be ‘sadly missed’ by her children and four sisters.

‘The whole family were totally shocked and devastated.

‘Whatever problems there were in the relationship, our sister didn’t deserve to die in such a brutal and callous way,’ she said.