Crazed fitness instructor Karl Taylor dumped the naked body of a sales manager in a woodland beauty spot after stabbing her to death on their first date.

Taylor, 27, hid a carving knife in his sleeve and stabbed Kate Beagley 31 times in the head, neck and face.

Taylor,a martial arts expert and children’s football coach, struck as the pairs at on Richmond Hill, overlooking the River Thames, after meeting for adrink on May 30 last year.

They had swapped telephone numbers just days earlier in a West End nightclub where Miss Beagley, 32, was out with friends.

The friends helped lead police to Taylor after raising the alarm when she failed to turn up for work.

Taylor cracked in his police interviews and admitted he had murdered his date- even driving detectives to the spot where he had left the body.

But he changed his story in court and tried to convince an Old Bailey jury Miss Beagley had stabbed herself to death in front of him after being overcome by a ‘dark and cold’ side.

Miss Beagley, a national manager for British Gas, met Taylor in the CC nightclub, just off Leicester Square, on May 18 last year.

After ‘dancing and talking’ through the night they swapped numbers.

OFF TO THE PUB 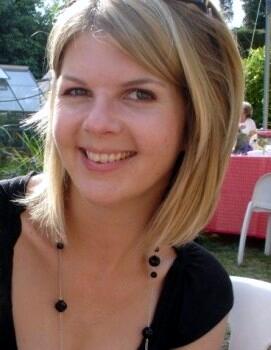 They arranged a first date on May 30 and Miss Beagley picked up Taylor in Chiswick High Road around 9pm in her Volkswagen Golf, before heading toThe Roebuck pub in Richmond Hill.

After a quick drink, they headed for a bench on the hill, which overlooked the Thames.

Miss Beagley quickly lost interest in her date and told Taylor she wanted to go home.

They got up to leave but Taylor was stunned by the rejected and lured her back to the spot where they had been sitting, telling his victim he had lost his keys.

Peter Clarke, QC, prosecuting, said: ‘He repeatedly stabbed Kate Beagley in the head and face and the throat,cutting into both her artery and her vein and indeed her spine.

‘Having killed her he then concealed her body.

‘At first the disappearance of Kate Beagley was treated as kidnapping. However following the defendant’s arrest, he eventually admitted to the killing.’

ARMED WITH A KITCHEN KNIFE

Taylor had armed himself with a kitchen knife, which he had stolen from his friend Adrian Cardbow’s home earlier that day.

He picked up Miss Beagley’s lifeless body and carried it to her car, which he then drove to Oxhey Woods, South Oxhey, near Watford, Hertfordshire.

CCTVcameras at a Shepherds Bush petrol station captured him on his journey,chatting calmly with other drivers on the forecourt.

Once at the country park he stripped and cleaned the corpse before dumping it in undergrowth.

As he returned to London, Taylor threw the murder weapon and some of Miss Beagley’s possessions on to an embankment of the M1.

Among the items was a book called ‘You Can Heal Your Life’, in which his victim had written notes about problems at work, the end of a previous relationship and concerns over her mother’s health.

Taylor had thumbed through the pages before tossing the book away and used the information to try and trick her friends in to believing all had been well before she disappeared.

He then paraded the dead woman’s car as his own to astonished friends, who described him as ‘happy’ just hours after the killing.

Taylor even handed out Marks and Spencer gift vouchers which he had stolen from the glove box. 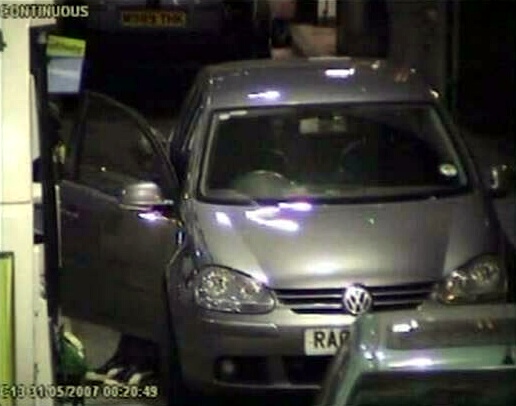 Not such a good idea…Taylor took the victim’s car

His girlfriend Lauren Chanlock said he seemed ‘normal’ when he called her just minutes after the killing, adding: ‘He said he had a new car. Itwas a VW Golf. I think he said he got it from a woman.’

When Miss Beagley did not turn up for work the following day on May 31, her friends and father Alan became increasingly concerned for her and raised the alarm with police that night.

Close friend Lisa Perry,who had been with Miss Beagley when she met Taylor, found his number on a work mobile phone in the victim’s flat and gave it to police.

He gave ‘vague answers’ to their questions and was arrested at MrCardbow’s home the following day, where he had stashed Miss Beagley’s car keys in the bathroom.

At first he refused to answer questionsin interview, but then broke down and revealed: ‘She pushed me away and she was grabbing me and I stabbed her in the throat.

‘I constantly and consistently got her in the neck because she was going for my face.’

DISCOVERY OF THE BODY

Taylor then drove police to the spot where he had dumped Miss Beagley and her body was found on June 4.

He also led officers to Leopold Road, Harlesden, northwest London, where he had left the victim’s 2004 VW Golf TDI. The keys had been concealed behind the bath panel at his friend’s home.

A week later he sobbed in his cell as he told Wandsworth prison guard Joseph Clorham :’It has all started to sink in, what I’ve done. 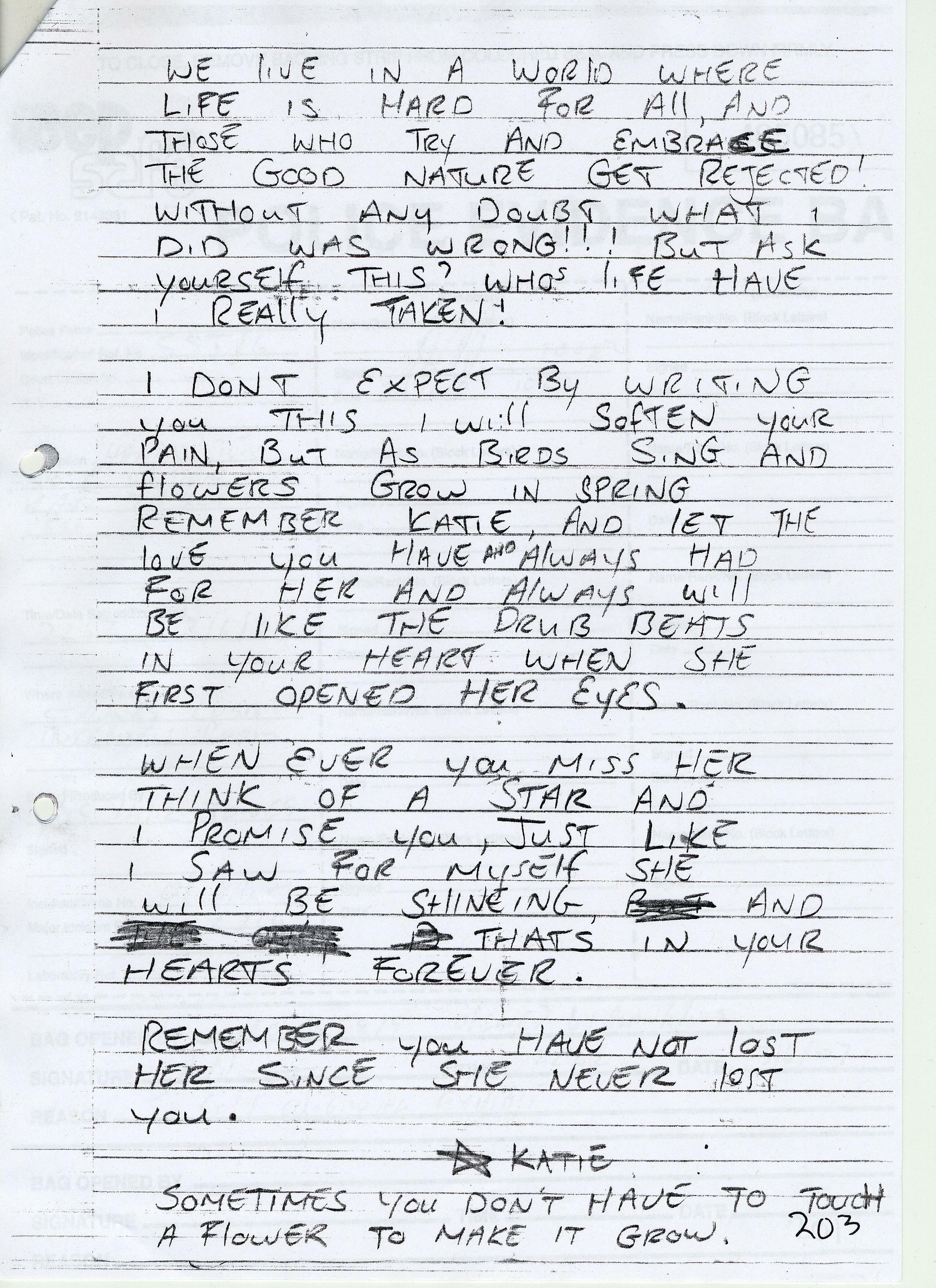 Gibberish…Taylor’s ‘poem’ for the girl he murdered

‘I didn’t want to kill her. I don’t know what happened. I had the knife on her neck and I was trying to get her car keys.

‘But she wouldn’t give them to me and then started moving and shaking and the knife went in to her wind pipe and she died.’

Giving evidence Taylor claimed Miss Beagley had confided in him over troubles in her personal life before breaking down and plunging the knife in her own neck.

‘She was prodding herself in the neck and grabbing her hair so the knife was moving round different parts of her head.

‘She was doing a probing and prodding towards her neck. I was very startled, very stunned. I stood there in awe.

VERY DARK AND COLD SIDE

‘She told me so much about her life, my picture was she was a very lovely girl inside but she had a very dark and cold side and I felt that overtook her and overwhelmed her.’

When he was being held in custody Taylor wrote a letter to his victim’s parents claiming their daughter had a ‘dark side.’

He was jailed for life and told he would spend at least 30 years behind bars.

Judge Giles Forrester told him: ‘You are arrogant, you are manipulative and you are highly dangerous.

‘I am satisfied that this was a murder done for gain. You went to meet this girl equipped with a knife.

‘She was doing no more than looking to you for friendship.

‘You took advantage of the vulnerability of that girl for your own end.

‘Youruse of that knife was premeditated, it was concealed on your person andthen having carried out this violent deed you took away and callously concealed the body adding significantly to the distress of her family and friends.

Miss Beagley’s friends hugged and cheered as he was led to the cells and one shouted: ‘Enjoy yourself Karl.’