A Turkish pensioner has been jailed for 20 years for trying to murder two women and stabbing two others just 90 minutes after he was released by police.

Ethem Orhon, 66, went on the rampage outside Sainsbury’s in Hampton, south west London, a day after he was arrested on suspicion of drugs possession.

He was also found with a blade and held overnight, but bailed the next morning to attend court at a later date.

Orhon rushed home, grabbed a ‘Leatherman’ knife and went out on murder rampage.

Mother of two Janet Morsy, 62, was left fighting for her life in hospital after she was stabbed a dozen times in the bloodbath, Kingston Crown Court heard.

Orhon rampages throught the carpark as shoppers flee in terror

Two brave schoolboys from Hampton School distracted Orhon, warned others and called police, remaining on the phone with the 999 operator the entire time.

One of the boys described him as ‘bat sh*t crazy.’

Orhon threw down his knife and gave himself up moments later after a police officer threatened to Taser him.

Police searched Orhon’s home and found a Tube guide with the words ‘murder at green lights’ written in pen, a newspaper cutting about a terrorist attack and brochures advertising Leatherman knives.

Following his arrest the bearded divorcee claimed he was ‘not himself’ when he walked out of the police station and claimed he had been hypnotised and framed by the police.

He said: ‘I was not myself, I was just stabbing and stabbing.

‘I never wanted to hurt anybody. 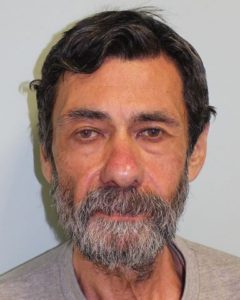 ‘I was like hypnotised, I was not in my own control.

‘It was like I was under the control of someone else, I didn’t intend to kill anyone.

‘I went to get the knife but not with the intention to kill.’

After the jury had failed to reach a unanimous verdict on the attempted murder of Ms Morsy, Judge Paul Dodgson gave a majority direction, with the jury returning a guilty verdict of 10-2.

He had previous convictions for possessing an offensive weapon, shoplifting, one of obtaining property be deception, battery, disorderly behaviour and three of failing to surrender.

Giving evidence Ms Morsy told jurors she had gone out that day to buy her son a birthday present.

‘I looked at him and he looked at me and I could see what was happening.

‘He seemed to do it with intent, he didn’t hesitate.

‘He started to lurch towards me, I was now paralysed to the spot.

‘He swung his arm back to get a good swing, I put my arm up and he stabbed me in the ribcage.

‘He then did another swing and stabbed me in he hip.

‘I thought this is getting really scary, this isn’t going to stop, I’m going to die in a Sainsbury’s carpark.’

Ms Brand said: ‘I was meeting my mother in the morning.

‘I got to the car park and he got near and stabbed me.

‘I was trying to walk away but he got me.

She continued: ‘He got me on the ground.

‘He stabbed me and I kicked him.

Ms Sullivan said: ‘I was stabbed in the back by an unknown male.

‘I’d driven to Sainsbury’s to do my weekend shop.

‘As I was walking to my car I could hear running footsteps and a voice shouting.

‘It turned around and see a male before me.

‘I felt a slight push in my back, like a tap, I did not think anything of it.

‘The man ran off after this.’

Ms Chandiramani was attacked as she checked bus times.

She said: ‘I was about to check when the next bus was coming over when suddenly I heard a terrible scream.

‘It seemed to very prolonged.

‘I saw a woman on the ground and a man standing next to her.

‘This woman was on the ground and he was still hurting her.

‘I knew I was in danger so ran across the car park.

‘He came after me and he stabbed me twice in the back.

‘I ran to the car park where I knew there would be more activity and I’d be safer.’

Ms Chandiramani said the knifeman looked ‘deranged and on a mission.’

Orhon came to the UK from Turkey in 1989, and had lived in a council property for 14 years, a property that was only minutes away from the supermarket.

He said he was humiliated by police the day before the attacks after being arrested for alleged drugs possession.

He said: ‘They strip searched me and left me naked for 20 hours.

‘They laughed and one whistled. I was treated like an animal.’

Orhon told jurors he remembered going to the Sainsbury’s, but didn’t remember the attacks.

‘I may get years, I am expecting that.

‘I am going to go to prison.

‘But I know what I believe.

Orhon, who lives in Deacons Walk, Hampton, denied two counts of attempted murder, and two counts of wounding with intent to cause grievous bodily harm.

Judge Paul Dodgson told him: He said: ‘On the morning of four ladies were going about their business.

‘It may have been meeting their mother, going to the gym, catching a bus or doing some shopping.

‘You were probably suffering from paranoid psychosis.

‘You clearly have an unusual personality.

‘You were out of touch with reality.

‘There is nothing to suggest you didn’t know the nature or the quality of your acts.

‘You took that knife quite deliberately to Sainsbury’s.

‘You went there with the intention of stabbing people and hurting people.

‘This was a planned attempt to kill.’

Orhon was also ordered to be on license for five years following his release, and must serve 2/3rds of his sentence.

Judge Dodgson then turned his attention to the bravery of the two boys who distracted Orhon.

Awarding them £1,000 each, he said: ‘Their actions and their courage almost certainly prevented an even worse disaster.

‘They will be invited to a ceremony by the Sheffield of London to receive these awards.’