ANTHONY HARDY: THE SATANIC RITES OF THE CAMDEN RIPPER

Anthony Hardy turned his flat into a satanic shrine to death as he brought the same terror to the Camden area of north London as Jack the Ripper had inflicted on the women of London’s Whitechapel over 100 years before.

When police examined the walls of his flat, which were covered in Celtic crosses and cruciforms, they found slivers of dried skin and flesh stuck and smeared to the wallpaper.

The murder inquiry began when a tramp foraging for food found human remains in a wheelie bin near to Hardy’s home in Royal College Street, Camden on December 30, 2002.

‘He opened a green refuse sack and was immediately aware of a foul smell,’ prosecutor Richard Horwell told the Old Bailey.

‘The sack contained a pair of human legs.’

Hardy,then 51, was born in Winshill, near Burton-on-Trent in Staffordshire,the youngest of four and was, by all accounts, a normal child.

He met his wife Judith when he was studying engineering in London and they married in 1972, later moving to Bury St Edmunds.

They emigrated to Australia and had four children, but the marriage fell apart. 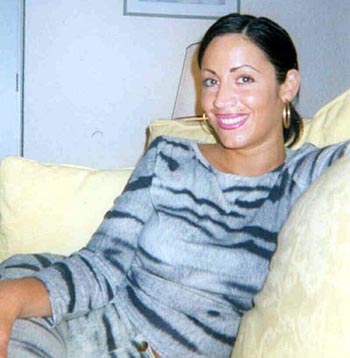 Hardy returned to London and began a life on the streets, moving between hostels and drinking heavily.

Neighbours at the bedsit where he lived for three years noticed his strange manner and heard sawing noises coming from Hardy’s home deep into the night.

His motive for murder was so to take pornographic pictures of his victims after he had indulged in a sado-masochistic sex ritual with them.

‘He did photograph two of these victims when they were dead in various positions,’ said Mr Horwell.

‘The defendant was in the process of preparing the body of the first victim to be photographed when he was interrupted.’

Hardy dressed his victims in a devil’s mask and Mr Men ‘Mr Happy’ socks before taking the pictures.

Police had caught him with his first victim almost a year before the discovery of the bodies in the bins – but could not charge him with murder.

Officers went to Hardy’s Camden flat on January 20, 2002 after he scrawled anobscene message on the door of an upstairs neighbour’s flat.

They had rowed over a leaking pipe and Hardy bore her a grudge.

One of the officers asked to go into a locked room but Hardy said he didnot have the key which was then found in his coat pocket.

When the bedroom door was opened police found the naked body of the neighbour, Sally ‘Rose’ White.

Miss White was found to have a bite mark on her right thigh, and a wound on her head but neither injury was fatal.

The pathologist Dr Freddy Patel found evidence of severe coronary heart disease, and decided the most likely cause of death was a heart attack.

Mr Horwell said: ‘In light of that conclusion, the police had no choice but to agree that no further action could not be taken against the defendant in connection with her death.’ 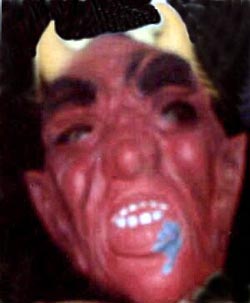 One of Hardy’s devil masks

Hardy pleaded guilty to criminal damage of the door on March 12, 2002, and was sectioned under the Mental Health Act.

He was released from St Lukes Hospital, Muswell Hill on November 4, 2002.

Almost after his arrest year later the body parts of Elizabeth Valad, 29, and Bridgette MaClennan, 34, were discovered by the tramp rummaging through the bins.

After arranging the bodies in grotesque poses the engineer took the photographs which were developed in a Soho laboratory.

BUTCHERED WITH AN ELECTRIC SAW

Hardy butchered the bodies with an electric saw and dumped parts in eight bags in the bin near his home in Royal College Street.

Mr Horwell said: ‘At that location two pieces of leg belonging to Elizabeth Valad and the upper torso belonging to Bridgette MaClennan were discovered.

‘Further away in another industrial bin the police found the right arm belonging to Elizabeth Valad, the left arm and left foot also belonging to Valad, and the lower torso of Bridgette MaClennan.’

Other parts were left in various locations in the Camden area including the head and hands, which were so carefully disposed ofthat they have never been found.

Police went to Hardy’s home on December 31, and found the front door open.

The prosecutor said: ‘There was a light on inside but the flat was empty.

The door to the bedroom was locked and a cloth had been placed along the bottom of that door.

‘Officers were immediately aware of a revolting smell coming from behind that door.

‘Police officers forced open the bedroom door and a torso was found, belonging to Elizabeth Valad.’

SKULKING IN A CHILDREN’S HOSPITAL CAFÉ

Hardy was spotted in a cafeteria at Great Ormond Street Hospital a few days later and arrested shortly afterwards.

He told police: ‘They’re are calling me The Ripper.’

When a detective who arrested Hardy changed his forensic examination gloves, Hardy laughed and said: ‘I use Marigolds.’

Detectives found the brand of rubber gloves when they searched the flat, together with the devil’s mask he had put on his victims before he photographed them. 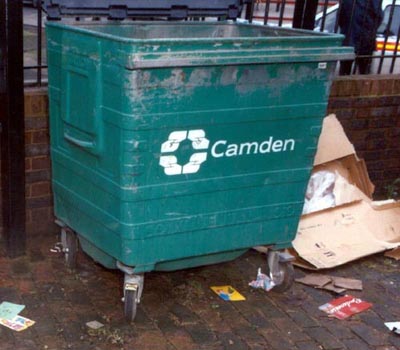 The bin where the bodies were found

‘They also recovered a number of fantasy letters that the defendant had written, intending to send them to magazines illustrating various sexual encounters he had claimed to have had,’ Mr Horwell said.

Police took seven weeks to search and examine the flat which was covered in cruciforms and weird satanic daubings.

A friend of Hardy’s had been sent film negatives, with a note that read:’Frank, please keep these negatives for me at all costs.’

The envelope contained 44 photographs taken of his two final victims.

Mr Horwell said: ‘In the case of Valad he had put on her feet a pair of Mr Men ‘Mr Happy’ socks that he had purchased on the 6th of December.

‘He had placed on Elizabeth Valad’s face some of the photographs, a devil’s mask and a baseball cap.

The photographs of Bridgette were found to be very similar.

All three women had been strangled by Hardy, who was to tell police it waspart of a sex game and he had not intended to kill his victims.

He claimed he was a ‘gregarious, intelligent well trusted man’ until he was made redundant and divorced in the 1980s.

‘The unspeakable indignities to which you subjected the bodies of your last two victims in order to satisfy your depraved and perverted needs arenot in doubt,’ the judge said.

Detective Chief Inspector Ken Bell said: ‘Hardy dismembered his last two victims with considerable skill;whether this was part of his gratification or simply an attempt to hide his crimes we will never know.’