Jane Andrews was the Cleethorpes girl who wanted to be a princess.

From humble origins as the plain daughter of a carpenter and social worker she would eventually move in the highest social circles in the land.

But ultimately her all-consuming desire to forge a permanent role in the upper class world would destroy everything she cherished.

One of two children, Andrews was born in the sleepy seaside Humberside town and later moved to Grimsby with her family.

By the time intelligent and promising Andrews took her ‘A’ levels at the local grammar school she was already desperate to escape south.

At the age of 21, her dreams came true when she became the Duchess of York’s dresser after replying to an advert in ‘The Lady’ magazine.

It provided her with a marriage in 1989 to Christopher Dunn-Butler, who also worked for Sarah Ferguson.

THE END OF HER FIRST MARRIAGE

In1995 Andrews first hit the headlines when £250,000 worth of jewellery was stolen from suitcases belonging to the Duchess, which were supposed to be in her care.

The following year she was sacked – ostensibly as part of a cost-cutting exercise.

Her life with the Duchess would remain an obsession and she would endlessly tell family and friends of the hotels she had stayed in – the grand suites at the Four Seasons in New York or the Cippriani in Venice.

Deprived of the job she loved, Andrews was soon on anti-depressants and her golden brown hair, once died red in imitation of her former boss, began to fall out in clumps.

The failure revealed that underneath the designer clothes and exclusive make-up Andrews was an unstable and intensely insecure woman now desperate to escape spinsterhood.

She was also seeing a psychotherapist after she made allegations of abuse as a child.

His parents had made a fortune through the Bristol Street Motors group and father Harry was a former director of Aston Villa football club.

Tom Cressman was becoming a wealthy man in his own right, with a bespoke car cover business and a partnership with former Formula One ace Sir Stirling Moss in a car polish enterprise.

The playboy hadthe image to match his wealth – one of his eight cars was a classic 1963 scarlet Alfa Romeo Spider and he kept a gorgeous 1960 Riva speedboat.

His status and group of friends would guarantee Andrews the place the tables of the rich and famous she craved after the loss of the Royal job.

Andrews tried to prise herself back into high-profile career by taking the post of PR manager for London’s world famous Claridge’s hotel in October 1999.

Inexperienced Andrews was a flop and forced to leave after only two months to become a shop assistant.

Increasingly she became dependent on her ‘Darling Tommy’ for financial assistance with the mortgage on her apartment in Battersea as well as her social life.

But Mr Cressman had his own problems. The court heard he was extremely close to mother Barbara after the divorce of his parents.

Although he had other women in his life, the jury heard she was the only woman he felt completely comfortable with.

He could also be cruel – he would make no secret of the physical and emotional imperfections he found in Andrews.

Despite his arrogance, Andrews saw him as her only chance of securing her future happiness in high society and constantly pestered him to commit himself to her above everything else.

She was desperate to prove wrong those who said Tommy would never settle down and gave himan ultimatum of six months to propose to her.

Mr Cressman later confided in a close friend that Andrews was ‘a pair of old slippers I cannot throw away.’

The months leading up to Mr Cressman’s death were their happiest times together.

Andrews fondly remembered how they went to look at houses together in the Cotswolds.

She sounded like an excited schoolgirl as she told the Old Bailey jury: ‘Everybody kept on calling us Mr and Mrs Cressman.’

‘He thought it was very funny and said “I like the sound of that.’ 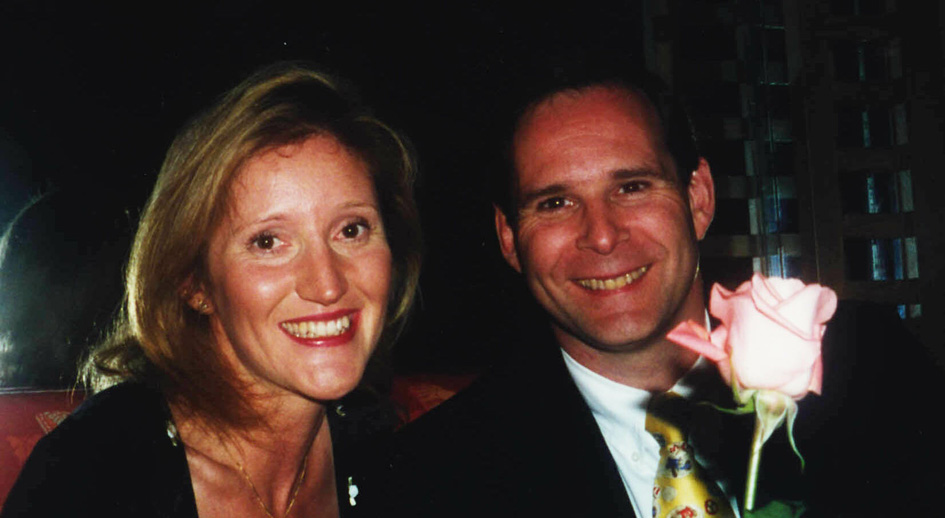 But friends noticed how the ‘ideal couple’ swung moodily from apparent devotion to pure spite against each other.

There were also clues to the impending tragedy in the hysterical answerphone message she left for her boyfriend complaining about his lack of affection.

‘Oh it’s loonybin Janey, you don’t give a toss if I’m walking home at 1am.’ she sobbed.

Another glimpse of her instability came at a dinner party when Andrews made a crude remark about Tom’s fondness for kinky dressing up after drinking too much wine and he later had to make an apology to her hosts.

Even her reserved ex-husband Mr Dunn-Butler, the first person she called after the killing, admitted she was ‘melodramatic’ and ‘liked to go on a bit.’

When fragile Andrews discovered Tommy had lied to her about getting married and she found steamy e-mails to a woman in America on his computer she saw her plans for the future in ruins.

Mr Cressman had dithered too long and Andrews suddenly realised he was ‘dangling  a carrot in front of me and pulling the strings.’

An idyllic holiday in Italy and the South of France ended with a blazing row at the airport with Andrews refusing to board the plane.

She tearfully called friends telling them ‘Tommy’ had finally told her he was not going to marry her.

‘SOMEBODY IS GOING TO GET HURT’

They returned home to Maltings House in Bagley’s Lane, Fulham but another furious argument erupted the following day and Mr Cressman called the police at 11.35am telling the operator: ‘Somebody is going to get hurt.’

Police advised him to keep calm and no officers were sent.

As her boyfriend slept that night, Andrews stripped naked to avoid staining her clothes with blood and stood before his bed clutching a knife and his cricket bat.

She smashed him across the head with the bat then stabbed her unconscious and helpless lover in the chest.

As Mr Cressman lay dying she returned to the room, pulled out the knife and stabbed him in the chest again to finish him off.

‘Anger and jealousy rose up in her and led her to take a terrible revenge on the man she clearly loved.

‘She was a friendly and decent woman who was so transformed and frankly burnt up inside by her anger that she killed him.’

Andrews walked from the room covered in blood and drove towards Plymouth after scrubbing the blood from her skin.

The first person she contacted was Christopher Dunn-Butler at 3.10am on Sunday,September 17, just a few minutes after the stabbing.

She then sent messages to friends denying all knowledge of her lover’s death and claiming he had been blackmailed.

Police found her at a lay-by on the A38 near Liskeard, Cornwall after she had taken 40 headache pills in an apparent suicide bid.

Andrews dressed in black from head to toe for every day of her Old Bailey trial as if in mourning for the man with whom she had so desperately wanted to share her life. 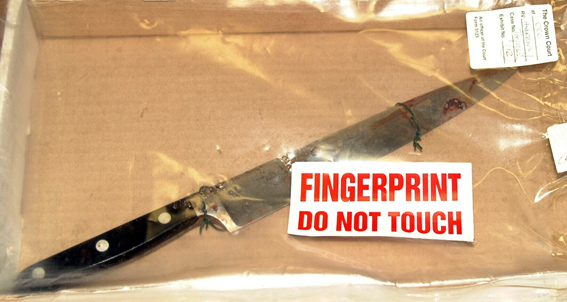 The murder weapon..Tommy was stabbed in the chest

But faced with a life sentence, Andrews murdered her dead lover’s reputation just as surely as she plunged the knife into his chest.

She wailed to the jury how she ‘was the only one who ever saw the other side of Tommy.’

On the night of his death she said he had tried to rape anally and she had left the bedroom twice.

Each time she returned, first with a cricket bat and then a knife to defend herself.

‘HE SAID HE WAS GOING TO KILL ME’

She told the jury: ‘He started hitting me and said I had ruined him. He said he was going to f****** kill me.

‘I just froze. He got hold of my hair and was trying to hit me. I picked up the knife because I didn’t want him anywhere near me.

‘We came together and the next thing I knew he was on top of me.

‘It must have gone into him. I crawled from underneath him and ran out of the room.’

Her barristerJohn Kelsey-Fry QC claimed she was not guilty of murder due either to provocation, diminished responsibility because of her mentalillness, self-defence or a bit of all three.

On May 16 2001 the jury convicted Andrews on a majority decision after 11 hours and 44 minutes deliberation.

The late Recorder of London, Judge Michael Hyam said: ‘In killing the man you loved you ended his life and ruined your own.

‘It is evident that you made your attack upon him when you were consumed with anger and bitterness.

‘Nothing could justify what you did. It was a brutal attack and even if you felt yourself wronged you were attacking an unarmed man who had possibly been asleep a few minutes before you attacked him. 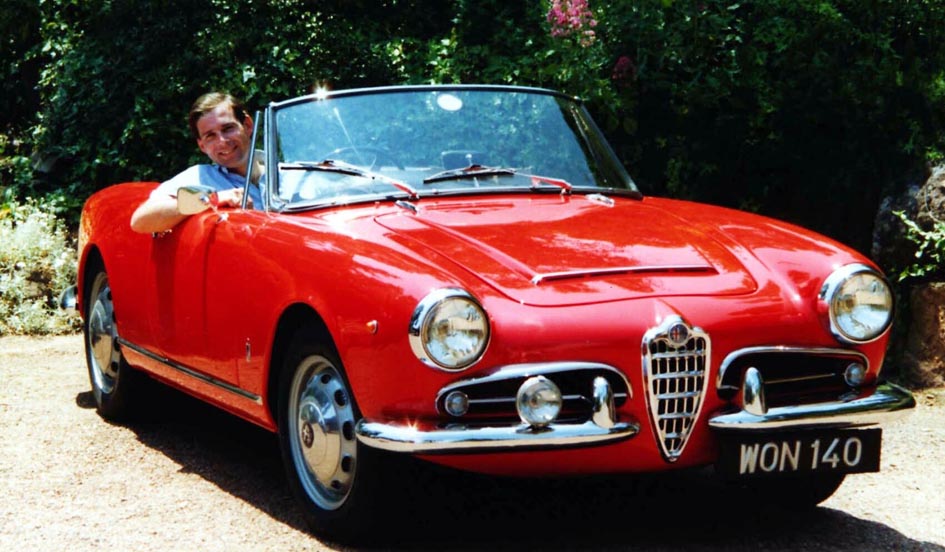 Playboy…Tommy behind the wheel of a gorgeous Alfa

‘After you had struck him first with a cricket bat and then stabbed him with a knife you left him to die without remorse.’

After the verdict Mr Cressman’s father Harry said: ‘I feel she is going to have the holiday she deserved.’

Andrews appealed against her conviction, claiming she would not have murdered Mr Cressmanhad she not been repeatedly sexually abused as a child.

Her claims were rejected.