Jeffrey Archer arrogantly believed he was untouchable as scandal after scandal failed to destroy his golden reputation.

But after a lifetime of lies, Archer’s obsession with sex finally allowed his former secretary Angela Peppiatt and old friend Ted Francis to ruin him.

Archer, a former policeman, corrupted and twisted the 1987 libel action in his favour after he was exposed as a sexual deviant.

Alibis and diaries were concocted and faked to preserve his reputation and overriding ambition.

The confidante of Margaret Thatcher and John Major mixed fantasy and reality as he had done all his life to fool judge and jury at the High Court and walk away with £500,000 damages.

It was the performance of the complete conman – a trade inherited from his father William, a bigamist, swindler and compulsive liar who appeared at the dock of the Old Bailey 87 years before his son.

William Archer (born 1875) was accused of various frauds but fled to France in 1914, leaving the friend who put up his bail to serve a jail term.

He returned after the war but escaped trial when one witness died and another vanished without trace in Europe.

William Archer was in his sixties when he married Archer’s mother Lola, who was to die during her son’s trial.

The couple’s first son was also christened Jeffrey but he was later given up for adoption and renamed David Brown.

The existence of ‘the first Jeffrey Archer’ had an indelible effect on the politician’s boyhood, effectively making him a fraud from the day he was born.

After gaining just three ‘O’ levels at school near his home in Weston-super-Mare, Archer began lying in earnest, claiming degrees from the University of California and a bogus military career for his father.

He started a career as a PE teacher and managed to get into Oxford University to begin a diploma in education and a political career which would make him a household name. 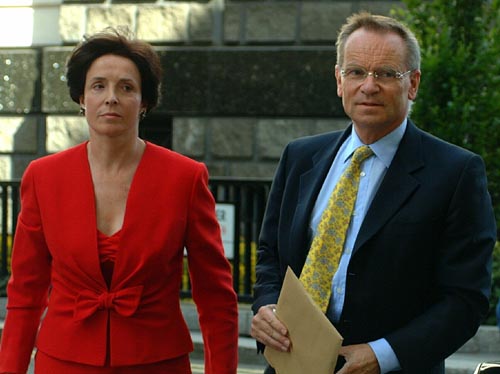 The ‘loving’ couple..Mary could not get him off the hook this time

It was at Oxford that he was to meet his beautiful and long-suffering wife Mary, who would help boost her husband’s career and ignore countless affairs.

She would also become embroiled in one of the financial scandals which would feature throughout the life of the disgraced peer.

Even as a student Jeffrey Archer was plagued with rumours of financial wrongdoing – fellow undergraduates were amazed that he owned houses and cars with personalised number plates while working part time as an Oxfam fund raiser.

As an MP in 1973, he settled out of court after he was accused of fiddling his expenses for United Nations charity work. Archer had to pay all costs and the allegations against him were never retracted.

In the 1970s Archer’s insatiable sex drive led him to begin the first of his ‘public’ affairs with society girl Andrina Colquhoun.

The affair had been preceded by a string of casual flings with women he entertained at his fabulous Thames riverside apartment, Alembic House.

After plying them with champagne and showing off his impressive art collection, Archer seduced his conquests on his exclusive white leather furniture.

Margaret Thatcher warned Archer to tidy up his personal life.

Other lovers included he bubbly blonde actress Sally Farmiloe, who dubbed Archer ‘Wonder Boy’ because of his sexual endurance.

Despite his high profile Jeffrey Archer could not resist the risk and the danger of squalid sex with prostitutes and was self-deluded enough to believe he could lie or browbeat his way out of any challenge to his integrity.

After his liaison call girl Monica Coghlan in 1987 he begged the editor of the News of the World not to publish the story – and then took the paper to court with the Daily Star.

Archer set about persuading friends to help him prepare a cast-iron and completely dishonest case against the newspapers to win the libel case. 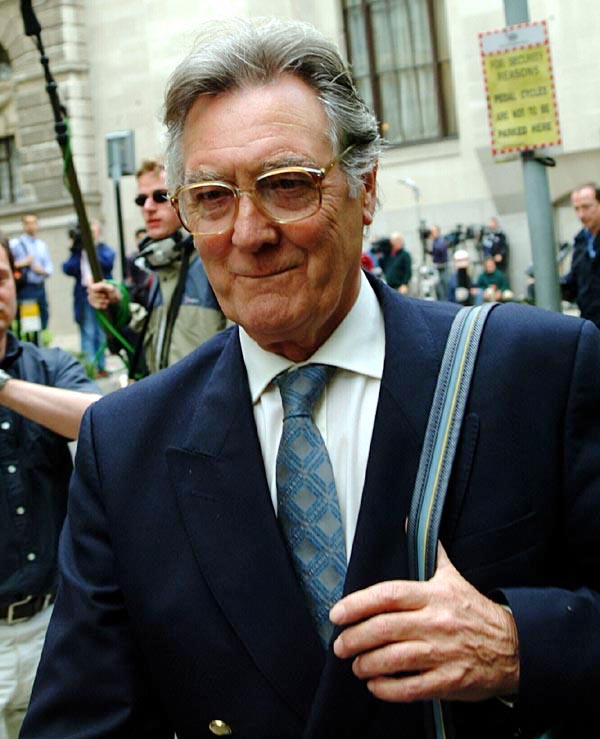 Ted…He knew where the bodies were buried

The film rights to his future books were given to friend Terence Baker in exchange for an alibi covering the sex session with Coghlan at the Albion Hotel.

Friend and PR man Michael Stacpoole was later hired to pay Coghlan £2,000, to vanish – and she arrived at Victoria Station to collect the cash as undercover newsmen looked on.

Archer’s secretary Angie Peppiatt was ordered to fake two diaries to back up his story that he was with Baker on the night he was with Coghlan.

TV producer Ted Francis was also been roped in to provide an alibi for Archer – and was inadvertently given the wrong day to lie about.

But after he had won the case, Archer made the fatal mistake of upsetting those entrusted with his guilty secrets.

After Francis provided the alibi, Archer gave him £12,000 to produce an Enid Blyton series on television.

He then deliberately embarrassed Francis by mentioning the debt in front of guests at one of his famous Krug and shepherd’s pie parties.

It was the chance remark that destroyed Jeffery Archer.

The lies Archer hoped were buried for ever surfaced again when vengeful Francis went to the News of the World with his story.

For £14,000, he destroyed Archer’s candidature as Mayor, his reputation and his career.

Peppiatt had been sacked by Archer after she caught him fiddling her expenses and in the true tradition of ‘a woman scorned’ she walked out of his office with armfuls of incriminating documents.

She would have no hesitation in twisting the knife in Archer’s back in court, telling shocked jurors how she knew of at least seven of Archer’s lovers apart from his mistress.

Archer remained silent in court, hoping his wife could help get him off the hook as she had done in 1987, when her performance in the witness box left a High Court judge fawning over her like an infatuated schoolboy.

But her haughty arrogance and black stockings failed to impress Old Bailey judge Mr Justice Potts, who repeatedly warned her not to give evidence for her husband.

Jeffrey Archer was left staring at his feet as his wife’s role sacrificial lamb failed to save him.

He showed no emotion as he was found guilty of four of the five charges he faced. 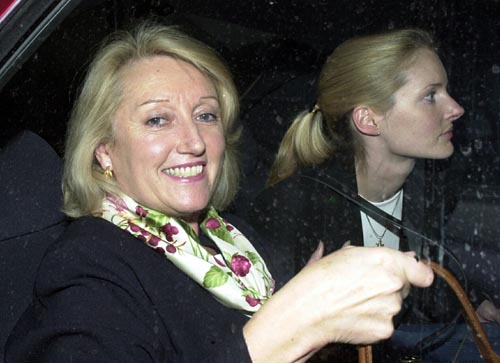 Lady Archer closed her eyes while the guilty verdicts were announced.

Mr Justice Potts told Archer he was guilty of the most serious case of perjury he had seen as he jailed him for a total of four years.

‘The fact is that in January 1987 you set out dishonestly to manipulate a proceedings which you had chosen to institute against the Star newspaper,’ he told Archer.

‘You did so I am satisfied certainly from 8th January when you required Mrs Peppiatt to obtain a blank Economist diary for 1986.

‘And you went on choosing your man with care to incite Ted Francis to write those letters to your solicitor setting out the false alibi knowing that he was in need of money for his TV project.

‘Sentencing you Lord Archer gives me no pleasure at all, I can assure you. Very little in this case could be said to give any sensible person pleasure.

‘It has been a extremely distasteful case.’

Jeffrey Archer has always bounced back – from fiddling expenses, near bankruptcy, claims of shoplifting in Toronto,and the allegations of insider dealing over the £80,000 profit made on Anglia TV shares when his wife was a company director.

Since his conviction he has written a bleating prison diary and has completed new novels.

Those who worked to expose him have not shared Archer’s good fortune – Terence Baker died of a heart attack in 1991, Coghlan was killed in a car smash and Michael Stacpoole was partially paralysed after a stroke.