A jealous husband who strangled his estranged wife to death after she refused his ‘indecent proposal’ of £100 to sleep with him one last time has been jailed for life.

Martin Cavanagh, 35, throttled 31-year-old Sophie Cavanagh mother of two in a rage at her Bromley flat on the night of 19 May 2018,

He then snorted a line of cocaine and wrote: ‘She deserved it,’ on a children’s whiteboard in the home.

Cavanagh manipulated her into agreeing to spend the day with him at Wingham Wildlife Park in Kent by spinning a fantasy tale about being on the verge of going to jail for a made-up robbery.

But an argument broke out later that same evening when Cavanagh demanded access to Sophie’s phone to see what other men she was talking to.

Cavanagh accused the cleaner of doing live strips on the internet to make ends meet.

‘He was consumed with jealousy and unable to accept the end of their relationship,’ said prosecutor Alexandra Healy, QC.

She described how Sophie had told her half-sister just a few days before the murder that Cavanagh had offered her £100 to sleep with him – a ‘disgusting’ offer she refused.

Text messages recovered from one of the defendant’s phones show he wrote to her weeks before the murder accusing her of ‘rubbing salt into his wounds’ by seeing other men. 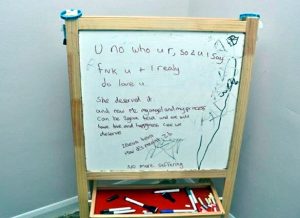 ‘I want to have you one last final time,’ he said in one pleading text.

But Cavanagh told jurors he grabbed Sophie by the neck in the ‘spur of the moment’ after she attacked him in the living room.

‘She didn’t lose consciousness – she stayed on her feet,’ he said.

Cavanagh claimed he was trying to defend himself and tried to give his former partner CPR.

But jurors convicted Cavanagh of murder following a two-week trial.

Sophie’s mother and half-sister nodded as he was jailed for life and ordered to serve at least 16 years before he can be considered for parole.

The killer remained motionless in the dock with his brow furrowed.

Judge Michael Grieve QC told Cavanagh: ’You have inflicted a lifetime of suffering on your two children.

‘You caused a wholly unnecessary and tragic death of 31-year-old Sophie, much loved by her family and friends, who had most of her life before her.

‘I realise that no sentence I can impose may seem adequate.’

He said Cavanagh murdered Sophie due to ‘pent up frustration and the realisation that if you couldn’t have her then no one else was going to.’

In a victim impact statement read to the court, Sophie’s half-sister Dawn Larkin said she was a ‘beautiful, loving person who would do no one any harm’.

She said nothing could fill the ‘big black void’ which opened up after her death.

The judge earlier said Cavanagh had a controlling, jealous and possessive manner both during the period of time that they were together in that relationship and after a point in time when they separated but remained married.

‘He had a short fuse and got angry quickly.’

If Sophie was out by herself or with others Cavanagh would bombard her with abusive calls and texts accusing her of being with other men and cheating on him.

He told her a number of times that if he could not have her nobody else could.

By late 2016 their relationship was fraught and they separated on 27 December.

The following day Cavanagh logged into Sophie’s KIK account and discovered she had been messaging another man, prompting him to smash his fist through the bedroom door.

When the police were called he told them he had warned the other man to stay away from Sophie and changed her password for the app. 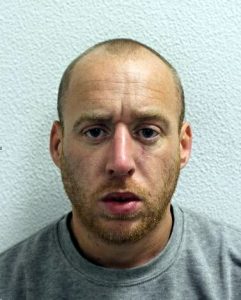 During his interview, following his arrest for her murder, he said: ‘I got jealous, I got possessive, kind of shut her out from the outside world, I see that now.’

Ms Larkin had told jurors she started going out with other people, but the relationships would not last because ‘Martin would find out somehow and end up texting them or just making her life hell’.

The pair had been out together but Sophie told him she had to go because she had a date.

Cavanagh then sent a stream of audio recordings to a mutual friend asking him where she was, as well as a live video clip showing him holding a ‘large curved knife’ to his neck then collapsing on the floor.

The killer, ‘barely able to control himself’, threatened in one: ‘If I catch up with her…’

Police eventually found him unhurt and the video had been a charade.

But the prosecutor told jurors: ‘The recordings demonstrate the state the defendant was in when he was obsessing about Sophie being with other men and was consumed with his jealously.

‘It shows the powerfulness of that jealousy and how it impacted on his behaviour.’

By May of this year Sophie had decided she wanted nothing more to do with Cavanagh and a divorce petition completed by her and dated 2 May was found at her home following her death.

The estranged couple were in frequent WhatsApp contact through Monday 14 May.

But they fell out on Tuesday of that week before Cavanagh made his offer.

He told her she had ‘broken, shattered, destroyed, ripped me to shreds’ and accused her of stripping online for strangers.

‘And I mean badly it’s all I fink about..

‘u striped online to strangers for money ok. If you were able to do that then plz Soph I’m begging you plz do this for me just 1last time plz.

‘Uno wot I’ve got £100 hear spare I won’t see it as I’m paying to sleep wiv u but at least that way u get something out of it.

‘It will mean nothing it won’t lead me on. I’m just craving to have you 4 1 last final time.

Ms Healy told jurors: ‘This message demonstrates powerfully how obsessed the defendant still was with Sophie and how he was still consumed with jealousy about her online activities.’

Cavanagh pushed the matter again the following day and pestered her to stay up for him so he could come around for a chat.

But when she told him she was too tired he sent a barrage of messages after complaining about her staying online and accused her of talking to other men.

When Ms Larkin visited her sibling the following day, Thursday 17 May, she told jurors how the two were ‘shouting at each other’ during a phone call about their cars.

Sophie later showed her the message Cavanagh had sent.

‘She seemed shocked and quite disgusted at it,’ Ms Larkin added.

That Friday, Sophie agreed to spend her final day with Cavanagh after he told her he was facing eight to 12 months behind bars for his role as getaway driver in a jewellery robbery in Caterham, Surrey.

Cavanagh said one of his two accomplices had already been sent down and his own fingerprints had later been discovered on a watch flagged as stolen at an auction.

It was because of this bogus story that Sophie agreed to accompany him to Wingham Wildlife Park the next day.

After the trip, the two ‘seemed to be getting on really well’ whilst drinking with friends near to Cavanagh’s home.

But he told jurors the argument that led to him strangling her to death was sparked by his confession that the prison story was a lie.

‘I just saw that look, like she was really pissed off and I am going to get the end of that,’ Cavanagh added.

‘She just continued to go with her left hand and her right hand and in the spur of the moment just to stop myself being attacked and with no violence whatsoever I just had her around the neck and I was pushing backwards.

‘I asked her to get off me and to stop.’

He added: ‘She didn’t lose consciousness. She stayed on her feet.’

Ms Healy told him he ‘felt strongly that if he could not have her nobody should have her’ and accused him of inventing a story to ‘manipulate Sophie’.

She added that Cavanagh ‘became angry in the flat about wanting to look at her phone’ and throttled his ‘terrified’ former partner when she screamed out in fear.

‘I know I have done wrong in the past,’ Cavanagh told jurors.

Cavanagh, of Chatterton, Bromley, denied murder but was convicted by the jury.

He was sentenced to life imprisonment and must serve a minimum of 16 years, minus the 196 days he has already spent in custody.