Robber Joel Smith shot Toni-Ann Byfield in the back to stop the little girl identifying him as she ran screaming to the door of her father’s bedsit.

Tragically Toni-Ann had been allowed to stay with a convicted drug dealer in London overnight, despite being under the care of Birmingham Social Services.

Smith, 32, a father-of-four, had intended to rob Bertram Byfield, 41, the man she knew as her father, but left crack cocaine and cash in the bedsit after murdering them both.

He was caught three years later when his former girlfriends and criminal associates were so sickened by the killing they broke their code of silence and gave evidence against him.

Smith had boasted of the crime while on the run and to other inmates at prison- even claiming he had been paid to carry out the murders.

He confessed to the mother of two of his children who said never she wanted to take the witness stand but added: ‘I’m a mother and if something like this happened to my kid I would want someone to give evidence.’

Smith denied both murders and blamed a friend who is now serving a life term for a Notting Hill carnival killing but was convicted unanimously at the Old Bailey.

The killer had grown up next door to the house where the Toni-Ann Byfield was murdered in Harrow Lane, Kensal Green, northwest London. 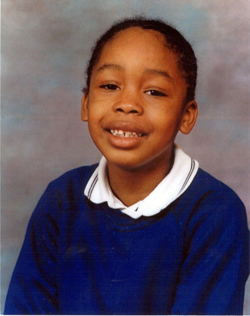 From his late teens he was involved in the northwest London street gangs the’MusLove Crew’ – also known as the ‘Love Lords’ – and the ‘Kick-Off Head Family.’

He then began robbing other crack dealers.

Two of his known associates have been jailed for murder at the Old Bailey in the last three years.

Tafari Dacas,a childhood friend, is serving a 30 year sentence for the gang execution of a rival Lee Christopher Subaran at the 2004 Notting Hill Carnival.

Smith also knew Iain Davis – who shot DJ Ashley Kenton,22, and Wayne Mowatt,29, with the same bullet at a New Year’s Eveparty in 2002 – through his uncle ‘Johnny Five’ Martin Harvey.

It is thought Smith knew Bertram ‘Tony’ Byfield by his street name ‘Blacka’ as a local drug dealer in the Kensal Green area.

Byfield, whose real name was Anthony Pinnock, had been notorious not only for dealing in crack but also as a serial womaniser.

At the time of his death he had at least three girlfriends and neighbours oftenheard the noise of domestic rows coming from his bedsit at a hostel for ex-offenders.

Byfield, who had served a nine-year jail sentence for supplying drugs between 1997 and 2001, had also been shot at the home of girlfriend Shenelle Hyman during a dispute with another man in 2002.

But despite this history of violence, social services released Toni-Ann into the care of a close woman friend of his only eight days before her death.

Toni-Ann-known as TT – had been brought up by relatives in England after being taken from her mother Christine ‘Roselyn’ Richards.

Ms Richards only came to Britain from Jamaica after the murders but was later thrown out after her appeal for asylum was rejected.

Toni-Ann had been placed with foster parents by Birmingham Social Services but when the family went on holiday she was allowed to stay with a friend of her father’s, Simone Campbell, in London.

It was agreed she could spend the weekend at her father’s bedsit before starting school in Harlesden, northwest London, on the following Monday.

On Saturday, September 13, 2003, Byfield took Toni-Ann to buy her a new uniform on a shopping spree with women friends.

Toni-Ann was a bright, fun-loving girl and could not stop talking excitedly about her new school.

Mr Byfield took his daughter to his friend Jackie Hunt’s house at 11pm before returning to his bedsit at around midnight.

Within 30 minutes they were both shot dead.

Smith forced the outside door of the hostel and then got Mr Byfield to open the door to his bedsit.

When he realised what was happening Mr Byfield tried to shut Smith out but was forced to dive for cover as the gunman fired the 9mm automatic pistol through the door.

Smith then burst into the room and shot Mr Byfield twice, once in the armpit and once in the penis as he tried to throw his bicycle at the gunman.

Toni-Ann ran for the door to escape and Smith mercilessly gunned her down.

Prosecutor Richard Horwell said: ‘The only sensible inference is that Toni-Ann was shot to eliminate her as a witness.’

CRACK IN THE CUPBOARD

Smith fled without bothering to search the flat and left behind him 31 grammes of crack cocaine in a cup on top of the fridge and £600 in a jacket pocket in a cupboard.

The gunman escaped without leaving a single piece of DNA, fibre or fingerprint evidence and was not caught on CCTV near the scene.

A£25,000 reward also failed to bring any leads but eventually two girlfriends and two criminal associates agreed to give evidence against him.

‘This crime had shocked the nationand we suggest that its notoriety was such that eventually the barriers that exist between some individuals and the police collapsed,’ Mr Horwell said.

Days after the killings Smith travelled to the Nottingham home of his former girlfriend Amanda Taylor, 31, who he met while they were both serving a prison sentence in 2000.

She told jurors: ‘He was restless, quite agitated. I just kept saying I wouldn’t understand, something bad has happened.

‘He cried a bit. He asked me if he could stay at my house. He just needed to get away for a bit, from London.’

Miss Taylor,who claimed Smith robbed two of her friends in crack houses,said she refused and did not tell police of his visit until they arrived to question her months later.

‘I DIDN’T WANT TO TALK TO THE POLICE’ 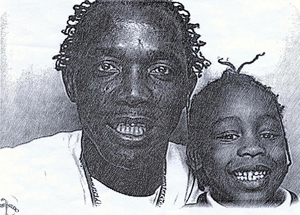 The mother of two of Smith’s children told the court he admitted the killings during a shopping trip in Harrow for the youngster’s birthday presents.

Amanda Dennis, who met him in 1994, said he suddenly turned to her and said: ‘It was me. It wasn’t meant to happen.’

In January 2004 Smith moved to Liverpool and set himself up in the drug trade.

He told one friend Robert Langley, who had just come out of prison: ‘I blasted that Yardie and his girl’ and showed off his 9mm pistol.

Another associate known as Curtis Brument claimed when Smith confessed to the murders over a coffee in a cafe in Picton Road, Liverpool he had said: ‘Its all right to kill a kid.”

‘He asked if I had heard of the murder of another little girl. He said she had been shot and had died.I told him that I remembered it.

‘He told me the police had got the wrong motive. He said they thought it was drug related, between Jamaicans. But he said he knew the real reason.’

On July 27, 2005, Smith was jailed for three years for slashing the throat of his mother’s boyfriend with a penknife during a row on March 24 that year.

But even while serving his sentence he continued to talk about the murders.

A fellow inmate at HMP Liverpool in Walton claimed Smith boasted he was a hitman and had been paid £20,000 to kill Mr Byfield.

‘He had gone to a house somewhere in London, seen the fella in the house, shot the fella, the kid tried to run away and he shot the kid, the inmate said.

Asked why he had come forward to give evidence, he said: ‘I don’t want to be here whatsoever, I never went to the police in my life before.

‘To kill a child, an innocent thing and I’m meant to be involved in such a crime, I’m not having it. It’s disgusting.’

Smith was arrested at HMP Liverpool on October 11, 2005, and deliberately put in a cell with another suspect, his childhood friend Tafari Dacas.

The cell was bugged and police listened as Smith implicated himself.

During the trial Smith blamed Dacas for the murders – knowing he was safely behind bars for at least the next 30 years.

Smith, who was living on the South Kilburn Estate near Kilburn Park Train Station, denied two charges of murder.

Mr Justice Gross told Smith he must serve a minimum of 40 years.

‘Should you be released it will likely not be until you are a very old man,’ the judge said.

Toni-Ann’s mother Christine Richards muttered ‘bad man, bad man’ as Smith stuck a finger up to the police before being led down to the cells.

The mother said outside court: ‘She was a bright, lovely, respectful and talkative little girl. She had such a bright future and seemed to take the setbacks in her stride.

‘Her love for life could not be dampened until she crossed paths with Joel Smith.

‘There are many young men who think it is okay to carry a gun. I ask them to think again. All they do is bring tragedy to themselves and others.’