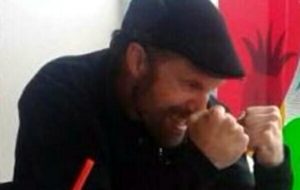 A former soldier who tried to stock up on guns in a bid to take his children with him to fight for ISIS in Syria was jailed for 18 years today (Tues).

Muslim convert Gavin Rae, 36, was arrested in a sting operation after handing over £850 for a Baikal self-loading pistol and silencer to an undercover officer.

The married father-of-four also said he wanted an Uzi, a Glock and more ammunition before armed police burst into the room of the Travelodge in Crewe, Cheshire, on 3 November last year.

Rae’s four children had been removed from his care after the family were deported from Turkey, where prosecutors say he hoped to cross the Syrian border.

He claimed he was taking his wife and children on a family holiday and insisted he knew he was being set up by undercover officers.

But Rae was convicted of a string of firearms offences following a trial at Preston Crown Court and sentenced to 18 years imprisonment with a five-year extended licence at the Old Bailey today (Tues).

Mr Justice Sweeney said: ‘Whatever your intention had been in going to Turkey in July 2015, I’m sure that, as the prosecution alleged throughout your trial, you decided to gain possession of working firearms and a quantity of ammunition so that if, in your view, it became necessary, you could take those children from this country by force and go on to take part in fighting abroad in support of the extremist Islamic cause you espoused in conversations with the undercover officers.’

The judge continued: ‘You fought the case hard but the jury saw through your lies and convicted you.’

He added: ‘Looking at the whole picture, which includes your undoubted extremist views, I have no doubt whatsoever you are a dangerous offender.’

Appearing by videolink from Manchester prison, Rae put his head in his hands and sobbed throughout the sentencing hearing.

Rae was dishonourably discharged from the King’s Division, aged 18, in 1998 after failing a drugs test for cannabis.

He committed four armed robberies and was sentenced to 10 years imprisonment in 2004.

Rae and his wife converted to Islam in 2012 following his release and he changed his name to Yaqub Rae.

He came to the attention of the authorities while allegedly attempting to reach Syria alone in July 2014.

Rae was turned back from Manchester Airport but left the country with his entire family in July the following year.

They travelled to Paris on the Eurostar, then flew to Marrakech and on to Casablanca but were refused entry to Istanbul, in Turkey and returned to the UK.

Rae also posted a string of worrying tweets in which appeared to be supportive of Islamic State.

Rae, by then working in railway construction, was targeted by three undercover officers, known as ‘Tony’, ‘Hamza’ and ‘Vic’.

Tony, from Eastern Europe, befriended him in the Edinburgh backpackers’ hostel where Rae had been living before he began asking about where he could source weapons.

Rae arranged to meet Hamza at Bicester Village shopping outlet near Oxford last October, who put him in touch with Vic.

A meeting was set up for November 3 last year at a Travelodge near Crewe where Vic was waiting with the Baikal pistol and silencer.

Rae handed over £850 before asking for three more boxes of ammunition, a spare magazine, and an Uzi.

All three were arrested when armed police burst into the room.

Rae’s barrister, Rebecca Trowler QC, said he had lived a ‘law-abiding’ life since his conversion to Islam in 2012.

‘He was employed, working in railway construction mainly, and earning good money, supporting his family, who by all accounts were and remain very fond of Mr Rae,’ she said.

She said Rae was under severe pressure at the time he committed the offences after losing his children following their return to the UK in July 2015.

‘Mr Rae’s case is, and remains, that he was taking his family on holiday,’ continued the QC.

‘His engagement with the undercover officers may have served the simple purpose of enabling Mr Rae to feel in control, as if he had a way out of the circumstances he was in rather than necessarily a plan which he would have carried out.’

Rae, of Preston, Lancashire was convicted of one count of possession of a Baikal semi-automatic pistol and silencer with intent to endanger life, one count of attempted possession of ammunition and three counts of encouraging or assisting the commission of an offence.
ENDS