Ian Huntley and Maxine Carr: THE SECRET OF SOHAM

Ian Huntley was a pathetic loser with a history of failed jobs and relationships before he became one of Britain’s most notorious killers.

He went to Soham to escape his past but brought only misery, despair and notoriety to the small market town of 10,000 people in Cambridgeshire.

It will now be forever associated with of thetwo pretty young girls who were pictured in their Manchester United football tops just hours before they died.

Both Huntley and his adoring fiancee and accomplice Maxine Carr had changed their names in afailed attempt to leave behind their wretched lives in the north east of England.

Before meeting Carr, Huntley had married 18 year-old Claire Evans in June 1995 after a short romance.

She did not even tell her parents about the ceremony at Grimsby Register Office.

But two weeks later she ran off with his brother Wayne Huntley, a witness at the wedding. The couple married in Thetford, Norfolk, in July, 2000.

Huntley then began an affair with a 15-year-old schoolgirl, who moved in with him after dropping out of school.

She became pregnant but they split up in 1998 after Huntley was charged with raping another 15 year-old in a nightclub. Huntley has never had any contact with the child.

Ian Huntley met Maxine Carr in February 1999 at a nightclub in Grimsby, seven months after he learnt the rape charge was to be dropped.

She told police it was ‘love at first sight.’ 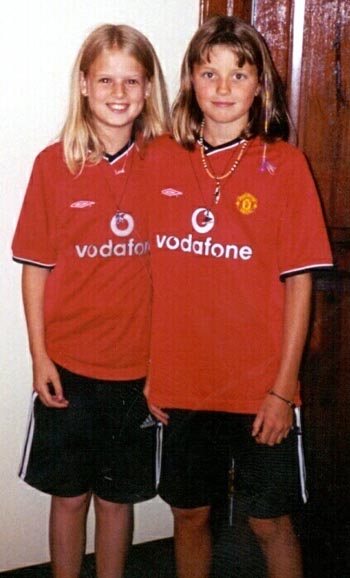 When they moved in together Carr did the cleaning, washing and cooking while Huntley lounged on the couch watching TV.

She had been anorexic since her schooldays and was repeatedly in and out of hospital.

When he was not at home Huntley would ring her several times a day to remind her to eat.

The couple both grew up Grimsby area and had a series of dead-end jobs at fish processing plants, nappy factories and insurance offices.

For eight months after moving to Soham they settled into a normal routine with Huntley taking a job as a caretaker and Carr working as a teaching assistant at the local schools.

They even talked of starting a family.

But Huntley was already showing signs of a mind so disturbed he was capable of carrying out a crime that would shock the nation.

He began to live in a surreal fantasy world bragging of ‘outrageous and shocking’ events in his early life and claiming his career as an RAF pilot ended because of his asthma.

Huntley told some he was training as a professional body-builder and others that he and Carrwould be retiring abroad because they had won the lottery.

He prided himself on the title ‘Residential Site Officer’ at Soham College and snapped at people when they called him a caretaker.

Carr dreamed of being a teacher and was able to convince staff at St Andrews’ Primary School to let her help out in class.

She was taken on until the end of term when the another assistant left the job and moved into Class Twelve of Year Six.

Two of the pupils were Holly Wells and Jessica Chapman.

Carr was later to say how the children thought she was ‘cool’ and teachers were to tell how she confused her friendship towards pupils with herrole inher job.

Holly and Jessica knew where she lived and they may have decided to call on her on the evening of Sunday August 4, 2002 after enjoying a family barbecue at the Wells home.

They boughtsweets from the vending machines at the nearby sports centre and were filmed happily walking together by CCTV cameras.

Ian Huntley was in the house and ‘annoyed’ by a phone call from Maxine Carr minutes before the girls arrived.

Carr was in Grimsby and was due to go out that night and Huntley feared his lover would get too drunk and meet another man.

INSIDE THE LAIR OF EVIL

Shortly afterwards the girls ended up inside Five College Close. Jessica’s mobile phone was switched off at the house at 6.46pm.

Two weeks later the bodies of the girls would be discovered in a ditch near Lakenheath airbase 17 miles away.

By then the bodies were too badly decomposed for a cause of death to be ascertained. 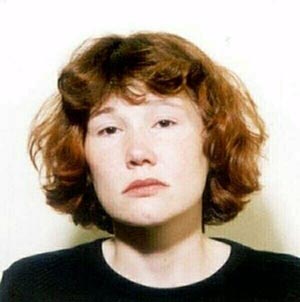 Carr…has been given a new identity

Pathologist Dr Nathaniel Cary said there was no evidence of stabbing injuries or blunt force and said the only alternatives were smothering, suffocation or strangulation.

Only Huntley knows what really happened to the girls and he is likely to take the secret of their deaths to his grave.

It is likely there was some sort of sexual motive, fuelled perhaps by the jealousy of his lover spending a night out with other men.

Huntley had been questioned nine times over sex attacks on young girls before he arrived in Soham.

‘This whole incident was motivated by something sexual, that whatever he initiated with one or the other or both of the girls plainly went wrong.

‘Each was a witness, a potential complainant. He was quite merciless.’

In a bizarre series of lies, Huntley was to tell the court he took Holly and Jessica into his house after Holly started to suffer a nosebleed while they were talking on the doorstep.

When Jessica screamed at him he said he put his hand over her mouth to silence her and both girls died.

He said: ‘I couldn’t believe what had happened.

‘I kept thinking ”How do you explain this to the police if you can’t believe what’s happened yourself.”

Ian Huntley started a ‘military operation’ to cover up the deaths, taking bin bags, a petrol can and rubber gloves with him to the ditch in his Ford Fiesta.

The girls were rolled into the ditch and their clothes cut off.

For the next two weeks he would play the role of concerned school caretaker for the journalists and film crews who flocked to the town as the search intensified.

He even approached Holly’s father Kevin, as if to taunt him and said: ‘I’m sorry, I didn’t know itwas your daughter. I hope everything turns out OK.’

On August 7 he returned to the ditch set fire to the bodies fearing his DNA could be traced. 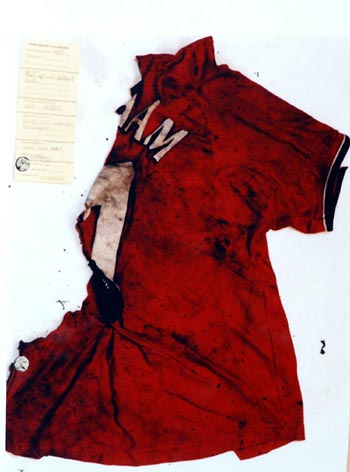 The charred remains of the football shirt

Carr then agreed to tell police she was having a bath inside the house while he spoke to the girls.

It was a story she would stick to for eight weeks after the couple were arrested.

Carr would only cut herself off from Huntley, who was she was to describe as a ‘thing’ in court after months in Holloway Prison listening to shouts of ‘nonce’ and ‘Myra Hindley, Mark Two.’

Perhaps her decision was hastened when she learn Huntley had been cheating on her with a woman working at Soham College.

Huntley was convicted of two charges of murder at the Old Bailey trial and Carr was found guilty of conspiring to pervert the course of justice by giving her lover an alibi.

YOU WEEP ONLY FOR YOURSELF

‘But you show no mercy and you show no regret. Your tears have never been for them, only for yourself.’

Maxine Carr was given three years and six months jail but walked free weeks later because she had served the equivalent of a 32 month prison sentence awaiting trial.

The judge told her: ‘Your selfish concern for yourself and for Huntley led you all too readily to lie, and all too glibly.’

Ian Huntley will never be released and Jessica’s father Leslie Chapman said the next time he sees him he wants him to be in the same place his daughter was when he last saw her – in a coffin.