A white van man is facing years in jail for repeatedly hacking a police officer over the head with a machete.

Muhammad Rodwan, 56, fractured PC Stuart Outten’s skull when he pulled him over for driving without insurance.

Rodwan claimed he thought the traffic cop was going to shoot him and he was cleared of attempted murder and possessing an offensive weapon.

But he was convicted of wounding with intent to cause grievous bodily harm – which carries the maximum sentence of life imprisonment.

The handyman was jailed for nine years for two counts of wounding with intent at Snaresbrook Crown Court, again armed with a machete in August 1997.

A year earlier he had been living with a group of men in a flat in Walthamstow, east London, when he went beserk with the blade and hacked at two of his room mates.

He nearly chopped off the hand of the men, who fled by jumping out of a window, and seriously injured the other.

Dreadlocked Rodwan was remanded in custody ahead of sentence tomorrow.

PC Outten told how he was on duty in a van with his colleague PC Helen Brooks when they pulled over Rodwan’s vehicle on Leyton High Road, east London.

He stopped the old LGV van because Rodwan had no insurance, but the driver then made as if to pull away.

When the officer stood in the way of the door Rodwan slammed it on his leg.

‘The defendant has then punched me twice,’ the officer said.

‘He seemed angry – his eyebrows were furrowed, face distorted and his whole-body temperament was somebody was angry at myself.’

A scuffle started and the officer tore out a hand full of Rodwan’s dreadlocks as he tried to restrain him.

‘I then started feeling something sharp being smacked against my head,’ the officer said.

‘Once this blows had happened, I then realised my head was becoming very wet very quickly. Once I realised it was not the weather.

‘I then focused on what I was getting hit with. It was a rusty two-foot-long machete.

‘As soon as I stepped back from the van he brought himself out of the van towards me. The machete was in his right hand.

‘Has holding it over his right shoulder. I thought he was going to try to kill me with it. As I was stepping away I have drawn my Taser with my right hand.

‘I believe I gave the command of: “Police with Taser”. It is to remind the person you are dealing with there is a Taser.

‘Once I have fired the first shot I have then stumbled and fallen back. The defendant was still approaching and closing in on me. I was focusing on aiming the Taser at a different section of body and firing again to save my own life.’ 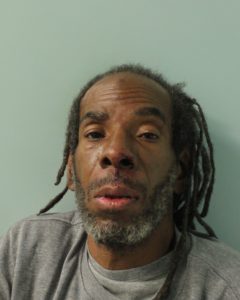 After the second shot Rodwan froze and the officer was later treated by paramedics.

PC Outten said he recalled ‘only being able to focus on staying alive’ as he was being bandaged.

‘The prosecution suggest he knew he had been caught driving without insurance and he tried to avoid the consequences.’

Rodwan told the court: ‘I am a black man, I get stopped all the time. I did not even see the police van.

‘I was a bit cheesed off about getting stopped, although at the time as far as I knew I had not done anything wrong.’

He added: ‘The police officer was actually quite rude and aggressive to me.

‘If he had approached me in a different manner, probably the circumstances would have turned out quite differently, but he didn’t.

‘The police came to the van, manhandled me and then tried to strangle me.

‘I could not think of anything else to do. I did what I could at that time. I was trying to defend myself. That was the only thing that was close to hand.’

When he was taken into custody, he told police officers: ‘My life is worth more than his life.’

Rodwan said he was living in his van at the time and claimed he kept the sharpened machete in the back for gardening jobs.

Rodwan, of Luton, Beds, denied and was cleared of attempted murder and possessing an offensive weapon. He was convicted of wounding with intent.